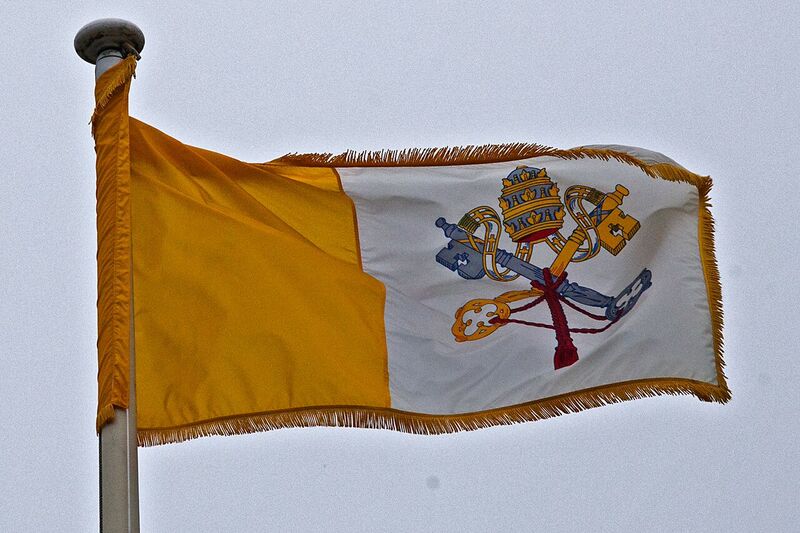 The homily was given by his predecessor, Bishop Emeritus Thomas McMahon, who was the moving force in the building of a new Cathedral a quarter of a century ago. 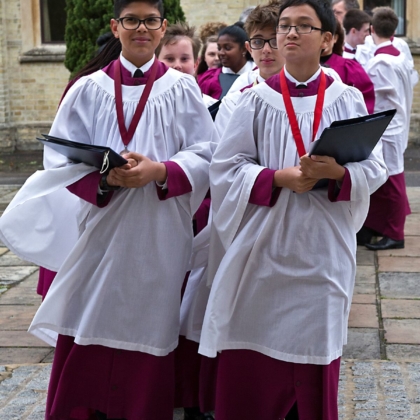 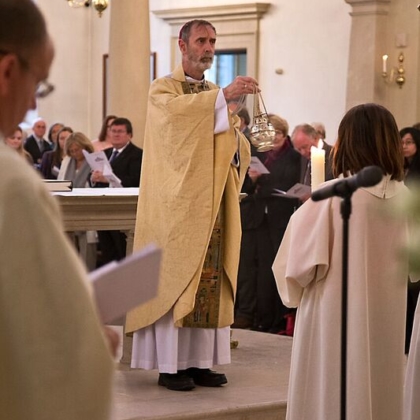 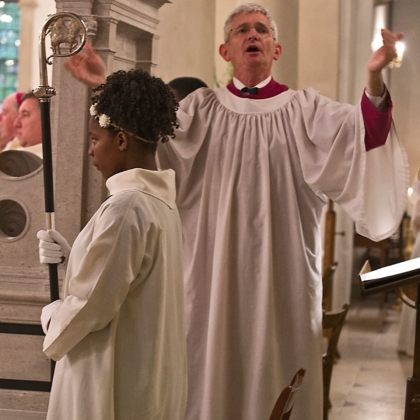 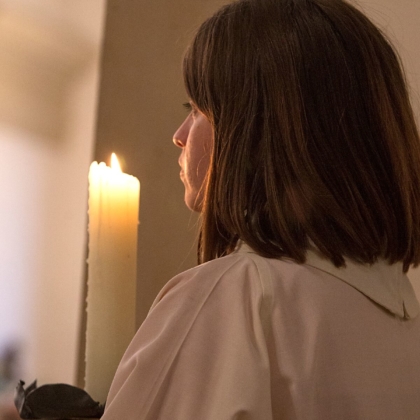 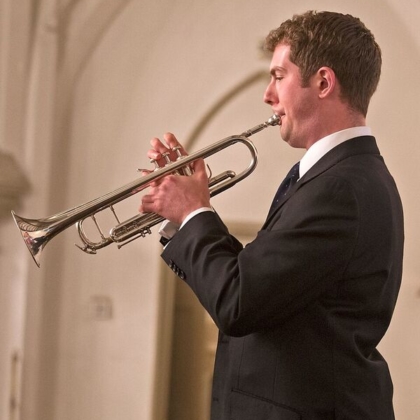 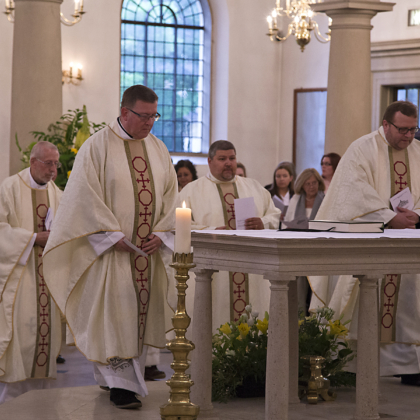 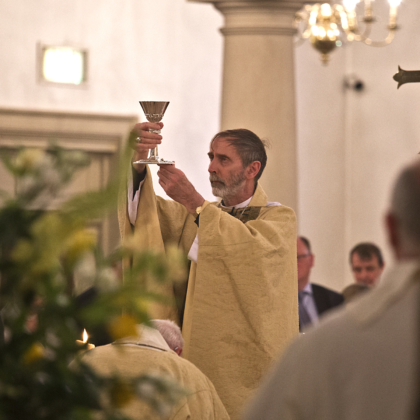 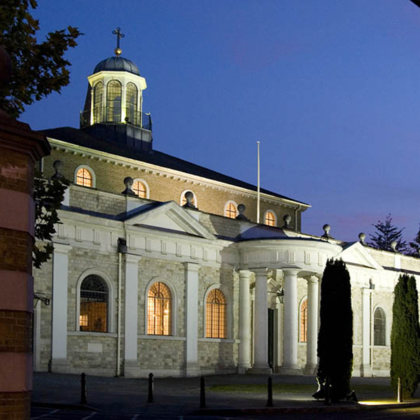 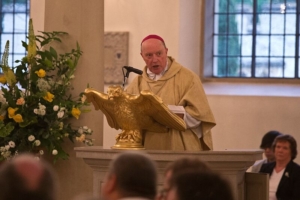 The feast of the Visitation of Mary to her cousin Elizabeth was chosen for the Dedication of the Cathedral because the whole project had been placed under Mary as principal Patroness of the diocese. We have just heard the Gospel from the feast itself, the Magnificat Canticle, considered to be an ancient Jewish hymn of praise where the lowly, the anawim awaiting the Messiah are exalted.

The Foundation Stone was blessed on the Feast of the Annunciation. At this point, let me tell you a rather moving story that I have shared with very few. As you may recall we had to go for planning appeal. It delayed the process by a year. As time drew near for a decision, the Feast of the Annunciation was approaching and I thought it appropriate to just nudge Our Lady and say it would be nice to have a response on your feast. The 25th March came and there was nothing in the post. I set off for Harlow where I had to officiate at the funeral of one of our priests, Fr. Donal Donnegan. I returned to Stock where I was due to be taken out to lunch by the Head of Religious Broadcasting for Anglia Television. He wanted to discuss the first televised broadcast from the diocese. Half way through the lunch the waitress came up to our table to inform me that there had been a telephone call from my secretary to say that the appeal had been successful. How wonderful the ways of the Lord that the ancilla, the handmaid had been an unknown waitress announcing good news.

On this special anniversary I would like to reflect on the role of the Mother Church in a diocese. As is well-known, it is not St. Peter’s but St. John Lateran that is the Cathedral of the Bishop of Rome. Inscribed over the door are the words: “Most holy Lateran Church, of all the churches in the city and the world, the Mother and head”. Similar words could be written over any other Cathedral. For almost a hundred years Brentwood has been the title both of the Bishop and of the Diocese. It follows that the Church of the ‘Cathedra’ or Bishop’s Chair, is the centre and Mother Church of the Diocese. As such it should be a model in every way.

First of all, IN WORSHIP. “The liturgy” quoting Vatican II “is the summit towards which the activity of the Church is directed; at the same time it is the fountain from which all her power flows”. The footnote in the document says that this solemn paragraph represents the core of the Church’s official teaching on the liturgy. It goes on to say how, “in the earthly liturgy, by way of foretaste, we share in that heavenly liturgy which is celebrated in the holy city of Jerusalem toward which we journey as pilgrims”. Indeed, we caught a glimpse of it in the Old Testament Lesson during Solomon’s prayer and entreaty at the Temple dedication.

Secondly, a model IN MUSIC. That same document includes a whole chapter on Sacred Music and begins by saying that; “The musical tradition of the Universal Church is a treasure of immeasurable value, greater even than of any other art”. It points out that: “the purpose of Sacred Music is the glory of God and sanctification of the faithful”. “Liturgical action” it says “is given a more noble form when sacred rites are solemnised in song. Choirs must be diligently promoted, especially in Cathedral Churches”.

Thirdly, IN ART AND ARCHITECTURE. Once again, in a separate chapter, the document stresses how “the Church has always been the friend of the fine arts and has continuously sought their noble ministry, with the special aim that all things set apart for use in divine worship should be truly worthy, becoming and beautiful signs and symbols of heavenly realities”. How true, that when we wish to express our experience of the sublimity of God, his glory and beauty, the most eloquent way is often in art, architecture, sculpture, stained glass, music which, in one form or another are windows onto God.

A model too IN HOSPITALITY. I love the origin of this word from the Latin ‘hospes’ which means: ‘to give a place to another’ – hence our word hospital or hospice. This role is clearly seen at all special diocesan celebrations such as the Chrism Mass with the clergy and people gathered around the bishop. But also on many less solemn occasions. The painted map in the porch featuring all the churches of the diocese gathered around the Mother Church is meant to be an expression of this. I think all the different groups of people, invited to the Cathedral each month during this Year of Mercy is a wonderful example of hospitality – giving a place to others and especially the marginalised and vulnerable.

An example also IN ECUMENISM. In response to Christ’s prayer the night before he died, for the oneness of his Church, we must strive to work closely with all other Churches and Faiths. Having said that, we are privileged to be co-terminus with Chelmsford Diocese and so able to enjoy a close working together, with a Covenant between our two Cathedrals. Certainly, faith is strengthen when shared – not seeking to do apart those things we can do together.

Finally, a Mother Church should be a model IN EVANGELISATION. This is the chief task for all of us and I know one that will be taken up by Stewards of the Gospel. The New Testament Lesson from 1 Corinthians spoke strongly about Jesus Christ as the foundation stone. Pope Paul VI reminded us that ‘the Church exists in order to Evangelise ‘and Pope St. John Paul II called it: ‘our obligation of love’. This task was never more urgent. Only last week a poll showed that a majority of people in this country claim to have ‘no religion’. We are seeing the fulfilment of those words of Cardinal Schonborn of Vienna who predicted that a time would soon come when Christians will be foreigners in their own countries.

I recall that the large new bell was inscribed with the words from Mark 16 ‘Go out to the whole world proclaim the Good News’.

There is an ancient tradition, especially in this country, of blessing a new bell and naming it. It will not surprise you to learn that our new bell was named ‘Gabriel’. I end with words with which Cardinal Hume concluded his homily 25 years ago: “And may she who heeded that Angel’s message at the very dawn of our Christian era, intercede for all of you, in this I recall that the large new bell was inscribed with the words from Mark 16 ‘Go out to the whole world proclaim the Good News’.