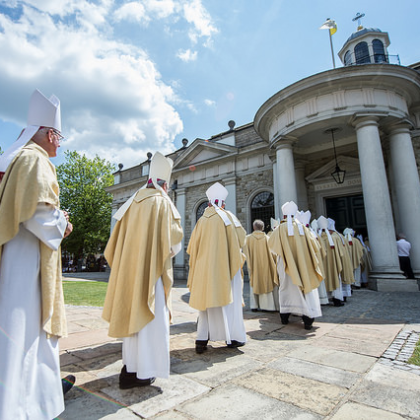 Above image by Marcin Mazur

In 2017 the Diocese of Brentwood will celebrate its Centenary. Brentwood is the only diocese to have been originally part of the Archdiocese of Westminster, from which it was separated in 1917.

A programme of special events to mark the Centenary will begin on 11 February 2017 (the Feast of Our Lady of Lourdes, Principal Patron of the Diocese), and will run until 16 November (the Feast of St Edmund of Abingdon (or Canterbury), one of the Secondary Patrons of the Diocese).

On 22 March 1917 Pope Benedict XV appointed Monsignor Bernard Ward as Titular Bishop of Lydda and Apostolic Administrator of the new Diocese of Essex. Bishop Ward was consecrated by Cardinal Bourne in Westminster Cathedral on 10 April 1917.

Initially no name was given to the new diocese, save that of ‘Essex’, because a decision had to be made as to where the new bishop would reside. As well as being a distinguished educationalist and the foremost historian of English Catholicism of his generation, Bishop Ward was also something of a railway buff. Hence the choice of Brentwood as the seat of the new bishop because its station was the first on the London side of Shenfield junction, which gave access to the Colchester and Southend lines. Moreover, Brentwood itself boasted a fine, although modest, church which would become the Cathedral, as well as a number of convents and Catholic schools.

The Diocese of Brentwood was formally erected on 20 July 1917 and Bishop Ward was named its first Ordinary. He died on 21 January 1920 and is buried at St Edmund’s College, Ware, the very place where he had been born and educated and where he had spent most of his priestly life. Bishop Ward had a great devotion to St Edmund of Abingdon (or Canterbury), hence the choice of that saint as a Secondary Patron of the new diocese (together with St Erconwald and subsequently St Cedd). Moreover, Bishop Ward’s great personal devotion to Our Lady’s shrine at Lourdes ensured that Brentwood was the first diocese in England & Wales to have Our Lady of Lourdes as its Principal Patron. 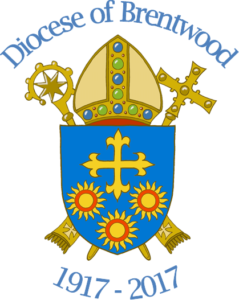 Annual Lourdes Mass, Celebration of our Patroness and an event for the sick.  Our Lady of Lourdes Church, Wanstead, 3 pm.

Saturday 11 February (Feast of Our Lady of Lourdes, Principal Patron of the Diocese)

(Formation of Diocese of Essex): Mass in Cathedral with Cardinal, Nuncio & Bishops at 7 pm.

Exhibition of History of the Diocese in the Conference Hall foyer. Will then travel to several locations in diocese including Colchester, Chelmsford, Leigh-on-Sea, Ilford, Upton Park and Harlow.

Centenary Celebration at Walsingham beginning at 12 noon and ending with Mass at 3.00pm.

Saturday 28 October (26 October is Feast of St Cedd, Secondary Co-Patron of the Diocese)

Centenary Music Concert at 7pm in the Cathedral.