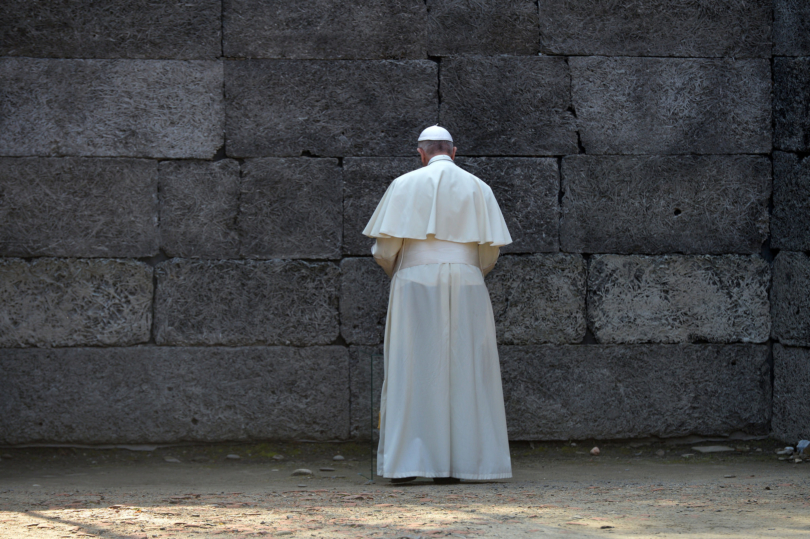 Parishioners at Our Lady Immaculate, Chelmsford have written a letter of complaint to the BBC after hearing a report about the Pope visiting Auschwitz as an act of ‘reparation’ for the Church’s silence during the Holocaust.

“To anyone who did not know what happened in the Nazi death camps during the Second World War, you would think, from the report, that the then Pope (Pius XII) and the Catholic Church were responsible, or played a major part, in the systematic murder of millions of Jews.  Your reporter ended his biased piece with the words that the Pope was on a “pilgrimage of reparation”.  How dare you!  In actual fact, during the Second World War, the Catholic Church had networks of underground organisations which protected many thousands of Jews and indeed, the Catholic priest who was briefly mentioned, Fr Maximillian Kolbe, died in terrible circumstances in Auschwitz having volunteered to take the place of a man (one of 10) who was condemned to be starved to death in a cell.  That saintly man not only gave his life but was in the death camp precisely because his monastery had sheltered 2000 Jewish people from the Nazis.

Pope Francis visited that terrible place to pray for the souls of the millions who died there.  It was never a “pilgrimage of reparation”.  Had Angela Merkel, representing the German people, visited, such terminology would have been more appropriate, but even then it would have been controversial as it was the Nazis and not necessarily the whole German nation who perpetrated such horrors.

It is ironic that Pope Francis was in Poland to attend World Youth Day in Krakow, an assembly of 500,000 young people from all over the world who attended in a festival of prayer, love and goodness and ended with an open air Mass for two million people.  What a shame that the BBC gave only minimal coverage of this wonderful event.

In these times when every day there is an atrocity on the innocent (the latest being a Catholic priest who had his throat cut in his church while saying Mass), surely it would do us all good to know that good things still happen in our world. Could you please ensure that in future your editorial staff check for bias and factual content before a report is aired on national television?

The couple were not the only people to be upset by the report. The Catholic Voices website deplored the BBC ‘libel’, which incidentally is not available on the broadcaster’s website, saying: “The idea that the Church was ‘silent’ during the Holocaust is an old canard that has been comprehensively rebutted by historians. There were silent and complicit Catholics — and a few priests and bishops — but the claim cannot be made of the Church as a whole, of the German hierarchy, or of Pius XII in particular.”

The website carries a reflection by Lord David Alton, provoked by the BBC report. In it Lord Alton begins by saying: “The BBC’s reporter clearly didn’t see the irony of stating that the Catholic Church had remained silent in the face of a genocide only to then describe how Polish Catholics were arrested and killed for sheltering Jews and how Fr Maximilian Kolbe was executed at Auschwitz after taking the place of another prisoner. Why was he in Auschwitz in the first place? He had been arrested for publishing a denunciation of the Nazis in his magazine, Knight, which had a circulation of around one million people. Hardly silence, then.”

He goes on to suggest that the BBC should read Dr John Frain’s carefully documented account The Cross and The Third Reich, which details the year-by-year condemnations issued by the German bishops and tells the stories of many Catholic politicians, priests and journalists who stood up to the Nazis, including Erich Klausner, the General Secretary of Germany’s Catholic Action, who was shot dead; Adelbert Prost, Director of the Catholic Youth Sports Association, also murdered; and Fritz Gerlich, a Catholic journalist murdered at Dachau.

Says Lord Dalton: “Perhaps the greatest calumny of all concerns the role of Pope Pius XII. Dr Frain describes ‘the cottage industry’ of detractors and their failure to objectively examine the facts. He cites Rabbi David Dalin who describes such books as ‘bestsellers made out of bad history’.

“Dalin cites Pinchas Lapide, an historian and Israeli consul, who said that Pius XII ‘was instrumental in saving at least 700,000, but probably as many as 860,000 Jews from certain death at Nazi hands’. In the context of the six million who perished he contrasts this record with the abject failure of others to save the Jews.”