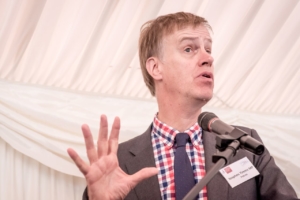 Member of Parliament for East Ham, Stephen Timms, has praised an East London charity for providing “a safe haven to some of the most vulnerable people in our society”.

The comment was made at a reception to mark World Homeless Day at the House of Lords, put on by homeless charity Caritas Anchor House and sponsored by the Global Noticeboard. World Homeless Day aims to draw attention to the estimated 100 million people globally who are without a place to live, and encourages society to support the homeless charities working to make a difference.

Timms applauded the work of Caritas Anchor House as “the best example of an organisation serving its community, and enabling people to plan for a decent future”.

Every year, Caritas Anchor House provides accommodation and support to single homeless people, giving them so much more than just a roof over their heads. It works with vulnerable groups, including those experiencing substance misuse, domestic abuse, mental health problems and offending. Last year alone, it provided a home for 211 people, helping 58 into independent living and supporting 36 into employment.

The charity is based in the London Borough of Newham, and was commended by event host Field Marshal Lord Guthrie on its transformative programmes, while operating in one of the most deprived areas in the country.

Lord Guthrie, a patron of the charity, said: “Caritas Anchor House’s results for employment and rehousing are astonishing – it turns around the lives of those who go there, and gives them a reason to live.” 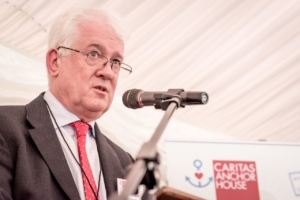 Keith Fernett, chief executive of the charity, described how the organisation puts the residents at the core of everything it do – a message echoed by Debbie Brown, a previously homeless person now living at Caritas Anchor House.

Debbie moved into Caritas Anchor House one year ago, on 6th October 2015. Traumatic experiences during her childhood and the loss of her daughter led to a spell in prison and times where she was “caught up in madness”. On release from prison, Debbie lost her home and for four years, found herself homeless and sleeping on buses.

“When I moved in to Caritas Anchor House, I was gobsmacked. For the first time in years, I had a roof over my head, and I sobbed. I had a bed – it was mine and had my name on it.”

Since coming to Caritas Anchor House, Debbie has turned her life around. She has taken part in training and volunteering opportunities, secured herself a week’s placement in Iain Duncan Smith’s private office and is now working with young offenders living in the area.

“Homelessness is such a major issue for everyone. Losing your home – whether it’s a huge house or a tiny studio – is devastating. I’ve come across so many people who never believed they would find themselves without a roof over their head, the comfort or security of their own front door, or to be left with nothing overnight. But, it does happen, and regularly.”

Caritas Anchor House has embarked on a vital development to improve and expand its services, including 25 ‘move-on’ flats, to support homeless people into independent living. The flats are due for completion in November 2016 and will allow the charity to provide a home and support to an additional 50 people each year. 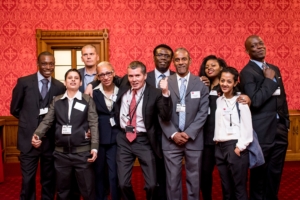 The charity needs support to ensure that every person that walks through its doors has access to the best care and support possible, making the hope of independent life a reality. For more information, or to make a contribution to turn a life around, please visit www.caritasanchorhouse.org.uk or call 020 7476 6062.