Fr Hugh Allan O Praem, parish priest at Our Lady Immaculate in Chelmsford, has announced that there will be a Mass on Saturday 30th July for the repose of the soul of Fr Jacques Hamel, the priest killed by Isil extremists in his church at Saint-Etienne-du-Rouvray, Normandy earlier this week, and for the persecuted church. The Mass will be at 12 noon at Our Lady Immaculate Church in London Road, Chelmsford. It will be preceded by Holy Hour from 11am.

Fr Hugh said: “We have a number of French parishioners who have been so shocked by this horrific event, but we have also had a lot of people in the street coming up to the priests and brothers expressing their shock and dismay about the brutal murder of Fr Jacques. One man jumped off the bus and chased after one of the brothers to express his sympathy and prayers for all in the Catholic community. The Mass is for Fr Jacques but also for our Christian sisters and brothers around the world who daily live in fear because of their love of God. So we’ll pray for them and for all who seek the peace only God can give.” 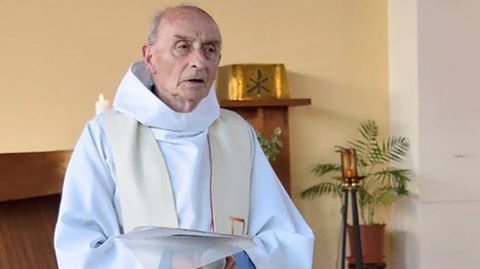 Every Catholic priest, indeed every member of the Church, knows that not only do the faith and blood of the Martyrs act as the seedbed for the growth of many graces bestowed by God upon His People, but also that there is always the possibility, however remote, that we too will one day be called upon to witness to Christ with our very lives. Rome, England, Ireland, Uganda, Albania, Vietnam, Japan, Korea… the list of places which celebrate the feasts of Martyrs specific to their locality is endless. France too, in the aftermath of the Revolution of 1789, had its Martyrs, such as the heroic Carmelite Nuns of Compeigne.

On Tuesday an 84-year-old priest in a suburb of Rouen, that great capital of Normandy with its splendid Cathedral, was the latest Martyr for Christ in a world which seems now to be becoming so tragically polarised on account of the advent of terrorism in the name of Islam. Of course, we know, and Fr Jacques Hamel would have known, that the barbarism visited upon Nice, Wurzburg, Munich and now a church in Normandy, does not represent the true face of the followers of the Muslim creed. Leaders of the Muslim community in France and worldwide have condemned this atrocity just as they did the recent outrages mentioned above.

Yet the fact that a Catholic priest was murdered as he was beginning to celebrate the Mass, the most important action and activity in the life of an ordained minister of the presbyteral order in the Catholic Church, leaves no room whatsoever for any doubt as to the motive of the unspeakable violence, which also included the kidnapping within the building of two nuns and others attending the Eucharistic Celebration at 9.00am in this suburban church. The attack was perpetrated (and evidently also filmed by the terrorists) for one reason: to strike against ‘the infidel’ as this warped version of Islam would see it, a version of a religion now poisoned in the minds of these and other young men who claim to be acting to defend their co-religionists and also to avenge the injustices of the past and present suffered by Muslims at the hands of the (Christian) West (as understood by these same young men).

The horror of Tuesday’s attack on Pere Jacques Hamel does not consist merely in that he was a man of advanced age, nor the fact that it was carried out against a defenceless community going about the work of God. The full horror does not end with the actual method of murder, if one can even begin to imagine the way in which this priest was killed. No, what is more frightening is the fact that the liberty, conscience, freedom and wellbeing of Christians is being directly assaulted, and yesterday in a country which itself has been no stranger (from 1789 onwards, and including the Combes Laws of the 1900s which expelled clergy and religious on a scale second only to the post-Revolutionary period itself) to periods of state-controlled persecution of the Church. Indeed, in the 16th Century France was torn asunder by what have become known as the Wars of Religion, and the Protestant Huguenots were persecuted under the Catholic ‘Sun King’, Louis XIV.

Yet it was here in France, traditionally called the ‘Eldest Daughter of the Church’, a country that boasts a noble Christian heritage despite the reality of its modern secularism, it was in France Catholique that yesterday Pere Hamel was called to give his life. As a fellow priest I weep for him because the Church has lost a good servant in the most awful circumstances, but I also pray that he will prove a most effective intercessor for the Church and the world at this crucial time. If it is the will of God, then please God, one day, Jacques Hamel will be raised to the altars, the very place where he shed his blood for Christ on a summer’s morning as he prepared to offer the Eternal sacrifice of Calvary.