Fifteen religious sisters from Austria and Germany, Zambia, France, Scotland, Poland, England and Ireland, speaking a total of eight languages, spent the day at the Augustinian friars’ Clare Priory in Suffolk recently. They were celebrating the founding of their original Congregation in Paris 150 years ago and exploring ways of working more closely together, following decades of separation caused initially by the Franco-Prussian war. 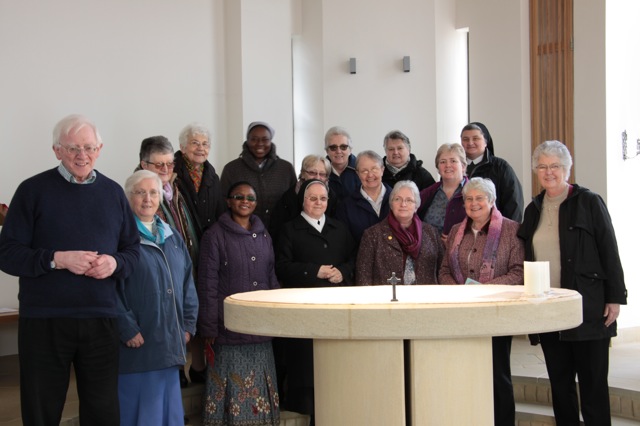 The sisters were representing three different Congregations whose central houses are now in Versailles, Vienna and Chigwell in Essex. As followers of the Rule of St Augustine, they are all united with the Augustinian friars who first came to Clare, from Tuscany, in 1248.

‘We visited Clare Priory to absorb the spirituality of the oldest Augustinian foundation in the country and to hold a Federal Council meeting to explore possibilities for future collaboration in our work,’ says Sister Mary Mangan, who is the English Congregation Leader at Chigwell Convent in Essex.
‘Our communities all stem from the movement which Father Victor Braun set up during the Industrial Revolution in a poor, notorious part of Paris,’ Sister Mary explains.

“He organised a few members of his parish to help women who were being trafficked on the streets when they flocked to Paris from Germany looking for work. To ensure this help would continue he formed a new religious order, the Servants of the Sacred Heart, who extended their care to orphans, single mothers, and the sick.”

At the outbreak of the Franco Prussian war the German and Austrian sisters were expelled from France and formed their own Congregation. Soon after this the English sisters also separated from the French, forming a new Congregation – The Sisters of the Sacred Hearts of Jesus and Mary – in 1903.

“The English sisters began to renew their earlier friendships with the other Congregations on the Continent in the 1950s,” says Sister Mary. “We wanted to learn more about our roots and deepen the living out of our common charism of working together with Jesus Christ and the poor. Our three Congregations, though still separate, formed a Federal Council together on 4 July 2003.”

Fr Ian Wilson OSA, Prior of Clare, said after the visit: “It was a great joy to have the sisters at the Priory, and to hear about their search for closer collaboration between their congregations.”
The sisters are affiliated to the Order of St Augustine and follow his Rule of Life, which begins: ‘Before all else, live together in harmony, being of one mind and one heart on the way to God.’ The sisters are looking for clear goals on how best to use their gifts and talents together.

“Part of their mission,” Fr Ian added, “is to be a transforming presence in those areas of the world where the poorest of God’s people are so often forgotten and excluded. Being in areas where there is pain, hunger, intolerance and hatred that tears people’s lives apart is a very noble mission and in keeping with the call of Christ in the Gospels.

“It takes courage to begin new paths and undertake new initiatives. It is by having such a hopeful and positive vision for the future that the sisters will discover further the gifts, talents and resources within their communities, and so be able to take the necessary steps in faith towards further collaboration in the days ahead.”