Patrick Russill is to give an online lecture on Sir Richard Terry and new music at Westminster Cathedral 1912-1922 on 5 February at 1pm.

In the early years 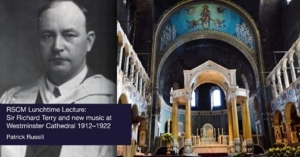 of the 20th century, Richard Terry, Master of the Music at Westminster Cathedral, forged a music policy that was to have a powerful influence beyond the realms of Catholic church music. The repertoire focussed on plainchant, previously neglected renaissance polyphony and contemporary music. He encouraged new music for the Roman rite, inspired by polyphonic ideals. This lecture examines how composers – including Wood, Howells, Holst, and culminating in Vaughan Williams – were inspired by the treasury of medieval and renaissance music as used by the Westminster Cathedral Choir in its liturgy.