For Headteacher’s and R.E. Leads 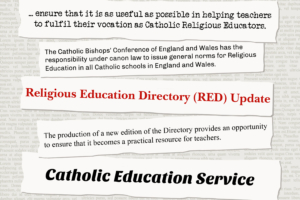 To register for this webinar, please use the link to the booking form.

In his encyclical ‘Christus Vivit,’ Pope Francis reminds us of the many complex challenges young people face today and how the previously acknowledged traditional sources of authority that help navigate these challenges are ignored or viewed with suspicion. Establishing a coherent identity and belief system can be a fraught and inconsistent process. Young people will make choices and decisions about their lives; however, the hope is that through religious education, they will not be presented with pre-packaged answers but offered the opportunity to develop the skills and outlook to ask the questions that will enable them to make informed decisions that help them make sense of the world in which they live.

It is The Catholic Bishops’ Conference of England and Wales that has the responsibility under canon law to issue general norms for Religious Education in all Catholic schools in England and Wales. Since 1996, the Bishops have exercised this duty by publishing “The Religious Education Curriculum Directory” which contains ‘the broad content of the religious education which [they] as bishops expect to be taught in Catholic schools.’ (RECD 1996, p.5) There have been two editions of the Directory, the first in 1996 and the second in 2012. Alongside it, the Bishops also published a document that set out a prescribed methodology for assessing skill progression in Religious Education: “Levels of Attainment in Religious Education.” In light of changes to assessment in other subjects, it was recognised that a new approach to assessment was needed in Religious Education and that the historical separation of content and skills was no longer sustainable. Hence, while an interim Standards document has been produced for the purposes of assessing skills, the Catholic Education Service has been tasked with overseeing the production of a third edition of the Religious Education Curriculum Directory. It is intended that the new edition of the Directory will contain a coherent and integrated presentation of both skills and content. The ambition is that such a presentation will allow Religious Education in Catholic schools to maintain its place as an academic subject at the “core of the core curriculum.”

The production of a new edition of the Directory provides an opportunity to ensure that it becomes a practical resource for teachers, a document which will not only set out what is to be taught in Religious Education but will also guide the way in which it is to be taught and inspire teachers to teach lessons that enable pupils to better make connections between learning and life and between faith and culture.

Given the fundamental and normative status of the Directory for Religious Education in all Catholic schools, the Catholic Education Service (CES) want to ensure that it is as useful as possible in helping teachers to fulfil their vocation as Catholic Religious Educators. This talk given by Philip Robinson, CES National R.E. Adviser, will discuss changes to the directory following on from its re-drafting after consultation with teachers within Catholic schools nationally.