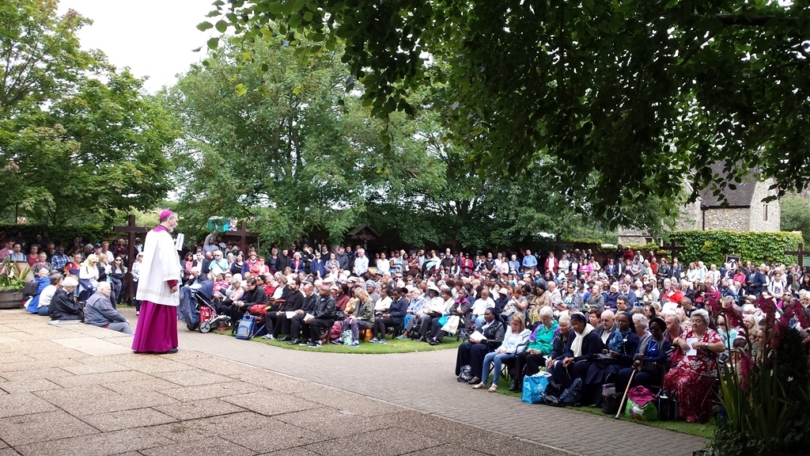 More than 3,000 people journeyed from all parts of Essex and East London to take part in a pilgrimage marking the centenary of the Diocese of Brentwood on 22 July. Led by Bishop Alan Williams, with Bishop Alan Hopes of East Anglia and Norbertine Abbot Hugh Allan from Our Lady Immaculate, Chelmsford, representatives from 74 parishes were accompanied by 56 priests, six deacons, two seminarians and 79 altar servers. Director of Music Andrew Wright led a choir, with Shea Lolin on a digital organ supplied by his company Eminent UK. Yet despite the many disparate groups, the varying ages and backgrounds, the atmosphere was overwhelmingly one of togetherness and unity.

Beginning at the Slipper Chapel, priests from the Diocese heard confessions before Bishop Alan Williams led pilgrims in a recitation of the Rosary and consecrated the diocese to the Blessed Virgin Mary. After a picnic lunch, the pilgrims walked in the footsteps of countless others along the Holy Mile to the site of the original Holy House, following the statue of Our Lady of Walsingham.

There they heard Bishop Alan welcome them to an open-air Mass in the shadow of the priory arch. He said : ‘Until the Reformation, this was the greatest of the Marian shrines – begun around 1060 and a wonderful place of pilgrimage until it was so cruelly ended in 1538. I wonder what the Catholics of those days who witnessed such destruction would think if they saw this great gathering in 2017.’

Earlier, Bishop Alan himself had been welcomed to ‘his second home’ (he was previously rector of the shrine for a number of years) by the Rt Rev Alan Hopes, Bishop of East Anglia, who told pilgrims ‘I pray for you all today that you may experience the warmth and power of Our Lady’s prayer in your lives and those of your families. May you all encounter her son today, Jesus Christ, and be renewed in your mission as the Diocese of Brentwood to proclaim him our crucified and risen saviour to all.’

He also thanked Brentwood ‘for lending us Mgr John Armitage and his energy for these five years to move the vision for the shrine forward’.

That energy was very much in evidence throughout the day, as the dynamic Rector, walkie-talkie in hand, directed coaches, closed gates and shepherded pilgrims in the right direction.

Preaching at the Mass, Fr John said : ‘It is on days like these that we are reminded of the Lord’s continuous and unconditional love for each of us, in the families, parishes, schools and religious communities that are the story of our Diocese of Brentwood over the last 100 years. We stand in the shadow of a church destroyed in 1538 but we are not here to celebrate buildings but faith in the God who loves us. We don’t need bricks and mortar but we do need faith – that faith which brings us together today, once again bringing this sacred space alive through the celebration of Holy Mass.’

The Eucharist, he said, builds the Church, uniting those who receive it into one body. ‘The seeds of disunity, which daily experience shows is so deeply rooted in humanity as a result of sin, are countered by the unifying power of the body of Christ,’ he said. ‘The Eucharist has built and sustained the human community we call the Diocese of Brentwood.’

He went on to talk about the four words from the Creed – ‘One holy, Catholic (and) Apostolic’ – which when lived out in a community are marks of the true Church.

The first refers to unity, he said. ‘Christ constantly prayed for the unity of the Church because he was aware of the divisions and errors that lead so many astray.’ But it is also about unity of all humanity not just Christians, he said; the second, holiness, comes through relationship with the Father, Son and Holy Spirit. ‘In prayer we discover God’s will in our life : people who are open to prayer will, if faithful and persistent, find the God who is seeking for them.’

‘Catholic’ refers to the universality of the Church, he said. ‘It is open to all, especially the poor and marginalised. The works of charity that we undertake in our parishes and communities are not simply for our own people – we serve others because we are Catholics.’

The last word, ‘Apostolic’ refers to our role in passing on the faith, he said. ‘The New Evangelisation helps us to share the beauty of God’s work – ever ancient and ever new.’ It is in communicating those ancient truths in a way that can speak to the people of today that we are truly apostolic.

In a fast-changing world, he said, we can become downhearted but we must always remember that the Lord is with us, as he was with the disciples on the road to Emmaus : ‘Like them, our hearts will burn once again within us as we break the bread and have the scriptures explained to us, as with fidelity and faith we embrace the Eucharist.’

‘Today we celebrate the fact that the Lord has abided with us over these 100 years and abides with us still. His presence is with us when we pray and in the sacraments, in the truth of his Word and in the radical generosity of our welcome and service of others, particularly the poor and those in need.’

The effect of living these three encounters with the Lord is evangelisation, he added. ‘It is a consequence of these things, not just a programme.’

He described the pilgrimage as ‘a response to the ancient call of Our Blessed Lady to the people of England, heard in this sacred space over 950 years ago, to share in the joy of her annunciation’.

He concluded : ‘On this joyous day, in this jubilee year, we give thanks for God’s blessing on our diocese over the last 100 years and commit ourselves to prayer, to deepening our knowledge of the Word of God and to embracing a radical generosity of life – living our lives for others, building communities that radiate the love of God as we, in the footsteps of all those who have gone before us, proclaim the good news of Jesus Christ to the men and women of our times.’

With his inspiring words resonating in their minds, thousands of pilgrims later shared in the Eucharist, before the forecast rain began for the homeward journey. As they left the grounds, many commented on the sense of togetherness they felt during the day.

Lyn Collins from Danbury and South Woodham Ferrers said: ‘It was so well-organised and a real coming together of ages and people from different backgrounds: there were three thousand and more but they were all of one mind. I also liked the fact that the choir didn’t sing everything and the whole group was involved in the music.’

She added : ‘ I felt quite emotional at the Mass – I thought about the numbers of people over the years who have suffered for their faith and how lucky we are that we can practise freely.’

Kim Wallwork, from St Antony’s at Forest Gate is a regular visitor to Walsingham, but she found this pilgrimage particularly poignant: ‘I’ve been attending pilgrimages to Walsingham since 2010 with my family. However this pilgrimage was something out of the ordinary. It was beyond a privilege to celebrate the centenary mass in the tranquility of the priory grounds with over 3,000 other pilgrims. Being led by Bishop Alan, seeing so many priests, hearing the angelic voices of the choir and watching the beautiful statue of Our Lady of Walsingham being carried so gracefully in procession was enough to give one goosebumps. Walsingham has a very special place in my heart : I’ve always felt that it is like Heaven on Earth and Saturday’s pilgrimage reflected this beautifully.’

Images from the pilgrimage 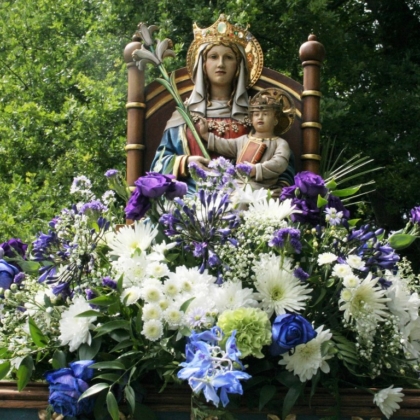 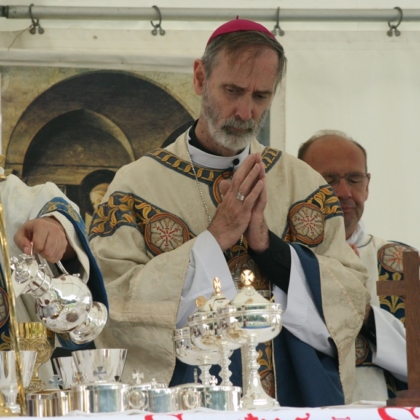 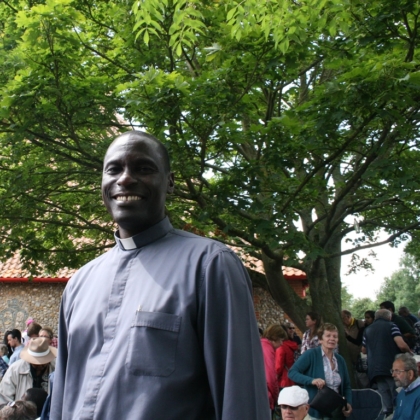 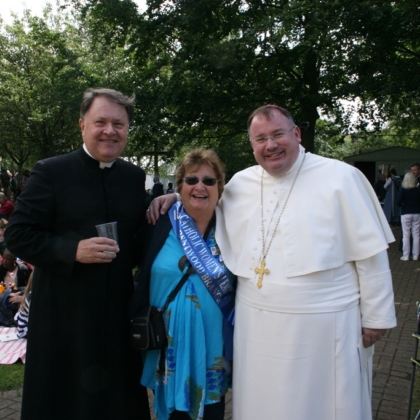 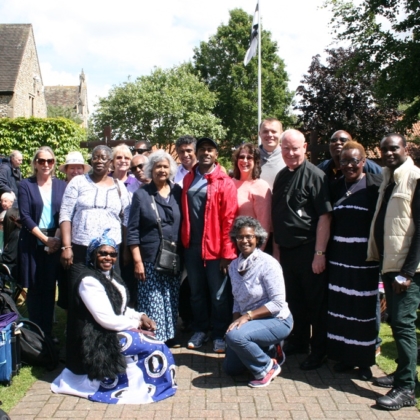 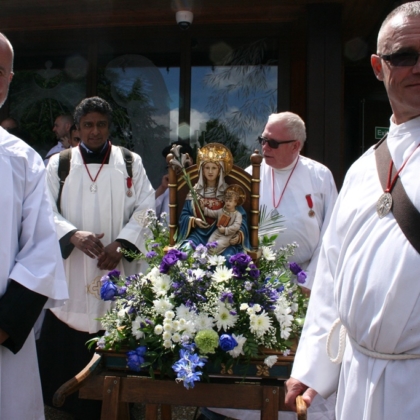 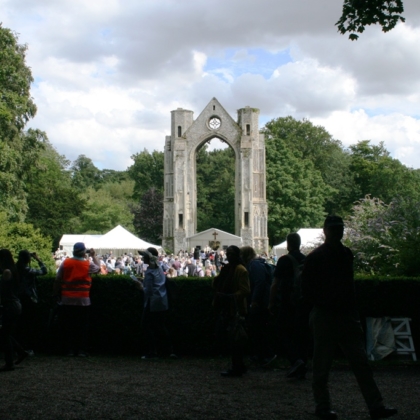 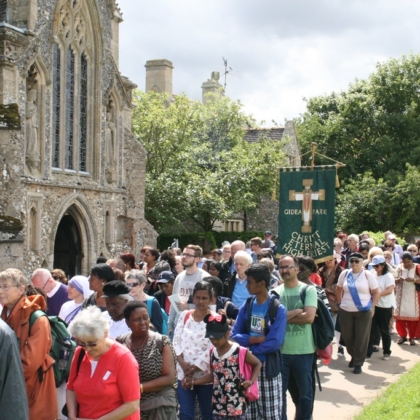 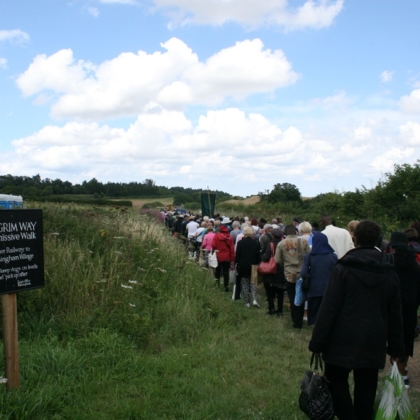 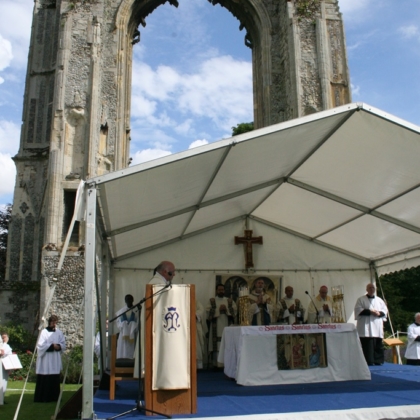