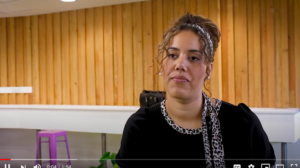 Anchor House Talks launched on the Caritas Anchor House YouTube channel at 12:00 noon on Saturday, 10 October, with subsequent talks to be released later in October and throughout November. Shorter versions of each talk will also be available on Facebook and Instagram. The launch date (10 October) was deliberately chosen to coincide with World Homeless Day and World Mental Health Day.

The first talk features Cilla, a resident at Caritas Anchor House whose journey has included experiences of both homelessness and mental health difficulties.

“My marriage broke down, I couldn’t afford the bills and my mental health deteriorated,” she says. “I was in a managerial position at work but my anxiety stopped me being able to travel. Eventually, I ended up becoming homeless and being referred to Caritas Anchor House.”

Cilla hopes that her story will help to bust some of the myths about the causes of homelessness and the circumstances of people who experience it. “I think it is easy to assume that people who are homeless come from a drug or alcohol abuse background and that can be true; however, everyone has their own story and people can find themselves becoming homeless having come from any walk of life.”

The second video of the series will feature Tim, a Caritas Anchor House resident who became homeless after a nightmare flatmate made living in his home unbearable. He suffered badly from depression and took an overdose, which led to him being hospitalised for four weeks.

“I came out of hospital, bought a tent and lived there for two years. During that time, I did a lot of volunteering – ironically serving breakfast to people who were homeless,” he says.

“People can become homeless for any reason. It is not a personal failing and it is not their fault. It can happen to anyone. You are only one pay cheque away from becoming homeless these days. We should all be a bit more compassionate.”

By showcasing the stories behind the statistics this World Homeless Day, Caritas Anchor House hopes to raise awareness of the work it does to support people who have lost their homes. The ongoing impact of the COVID-19 pandemic means that more people in Newham are now at risk of homelessness due to job losses. Caritas Anchor House has already seen an increase in demand for its services, and there are still many people in the borough who need its help.

That’s why, like Tim, the charity hopes that the videos will encourage viewers to be more compassionate and understand that homelessness could happen to anyone.

To find out more about Caritas Anchor House, please visit its website: www.caritasanchorhouse.org.uk