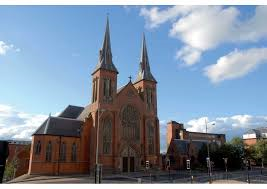 This Christmas, Midnight Mass will be transmitted live from St Chad’s Metropolitan Cathedral, Birmingham. In this year of the cathedral’s 175th anniversary, major restoration works have taken place as part of the heritage project surrounding the centenary of World War I. Archbishop Bernard Longley commented on the newly finished restorative works, hoping that viewers are “touched by the beauty of our cathedral at St Chad’s, but also the message contained in the building itself which I hope will lead people into a deeper understanding of the joy of Christmas”.

Families from the parish, having made Birmingham their home, have migrated from countries such as Eritrea, Poland, Morocco and India. The congregation are being encouraged to dress in national costume, highlighting the diversity of Birmingham’s Catholic community. Archbishop Longley welcomes those wishing to attend, to be seated no later than 11:15pm. For those joining the mass from their homes, Archbishop Longley thanked the BBC for “enabling us to put across the wonderful message of Christmas, the birth of our saviour and the peace that he comes to bring into a troubled world”.

Coverage begins on BBC One at 11:45pm on Saturday 24 December.