Bishop Alan went to Walsingham House at Abbotswick on Good Shepherd Sunday to preach, particularly for around 1,500 young people who have been working towards Confirmation this year, but also more generally for vocations – a traditional theme on the feastday. 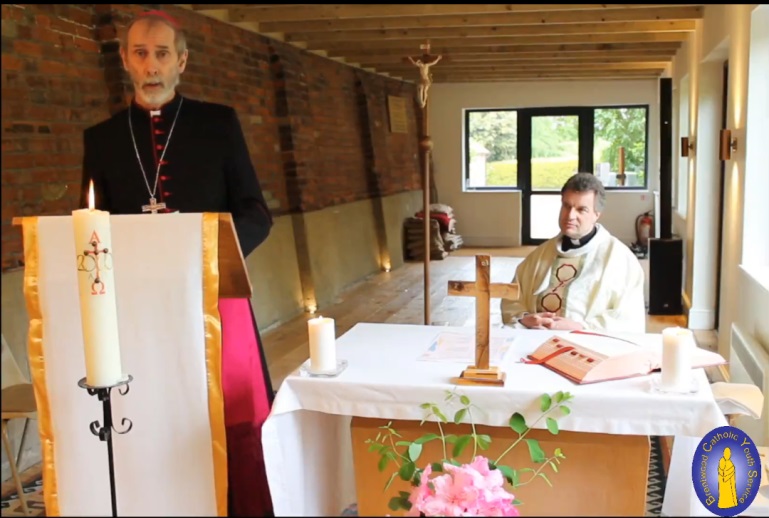 “We have two great intentions today,” said Bishop Alan. “We pray for our Confirmandi and for vocations.”

Addressing the Confirmandi directly, he said: “Normally I would have met many of you in Brentwood Cathedral or come to your parishes in the weeks and months ahead to confirm others – we will have to wait and see when that will happen.”

He added: “On vocations, our fundamental belief as Catholic Christians is that God in Christ calls each one of us by our name. We pray today that whatever that call is, we will be given the grace to hear and do the will of God.”

Good Shepherd Sunday, he said, is also the time of the risen Lord – Eastertide. “We are trying to work out how it is possible that the man Jesus could die on the cross, be buried and after three days rise again. As we try to puzzle that out, we are like the first Christians. They were in shock: the man who seemed to have changed their lives so amazingly – they saw him crucified and buried and had to work out what could it mean when he was raised from the dead. Faith in the risen Lord was transmitted by personal encounter as early Christians in shock, in mourning, in confusion began to meet Jesus, to listen to Jesus, even to eat with him. What strikes me is that all those encounters were personal and unique – they were called by name, they were given a mission, a vocation, a path in life.”

Other Christians in the early Church never actually met Jesus as the risen Lord, he said, but heard from priests, preachers about him, about his death and resurrection. “The same thing seems to happen to them: they heard the word of God, they heard the Gospel preached and it ‘cut them to the quick’, the phrase in the first reading. They realised that Jesus Christ was the same yesterday, today and forever and his call to them was exactly the same as it was to the first disciples on that first Easter Day.”

He added: “I pray that wherever you are, you will have an encounter with the risen Lord. He is the way, the truth, the life – he is the good shepherd. Pope Francis says it is fundamental to living a great human life. Unless you meet the risen Lord, you can’t taste the fullness of life. Christ says, I’ve come that you may have life to the full and if you want that joy of the Gospel, that joy of Christ, I pray for that real encounter for you during this Eastertide.”

Bishop Alan said that in the early church, those first few weeks between Easter and Pentecost were marked by great confusion, fear and despair. “The disciples were locked in the upper room – and in these days of lockdown that’s something we can all think about. What does it feel like to be locked by fear within a building, unable to get outside? We perhaps have an insight into that ourselves in these difficult days.”

But those early Christians had to work out what it meant to have the risen Lord among them, a Lord who was calling them personally, uniquely by name to go and preach, to go and live the gospel, he said. “As they worked on this, they remembered all the images Christ had used about himself. Many of them, of course, were familiar with sheep, were shepherds and so naturally Our Lord used images about sheep folds, about gates, about shepherds. Indeed in the Gospels, he sometimes said I am the sheepfold, that place of safety that you need to go. In today’s gospel he says, I am the gate to the sheepfold, the way to truth and life. And of course the enduring image for us, especially today, is that of the Good Shepherd. That can be a comforting image.”

He explained the rather uncomfortable and challenging parable of the lost sheep. “It seems a bit of a crazy parable. Who would leave 99 sheep to dangers – wolves, lions – to go in search of the one in the wilderness? It’s a really hard thing to understand. Is Jesus really serious; is he exaggerating to get our attention? Well let me give a little key to the parable. Imagine that you had lost a brother, sister, son, daughter, mother, father, best friend – they were lost, abandoned, needed to be saved. What would you do? Would you leave everything in search of them? I suspect the answer is yes, you would because love knows no boundaries, love knows no limits. In the parable of the lost sheep we see that there is nothing that God would not do for each and everyone of us – he loves us so much. If it means being reckless, if it means being foolish, if it means dying on the cross, our God in Christ will do exactly that. Today we celebrate the outrageous love of the good shepherd for each one of us. How do we respond to that love? I hope that you find great comfort in Christ the good shepherd, in salvation, in being saved.”

Quoting Fr Herbert McCabe OP, he said: “Catholic Christianity is not about being good – it is about being rescued; not about feeling safe, but about being saved. Christ has called each one of us by name – he has a unique path for each one of us and, in our turn, we must become like the good shepherd. As St Peter said in the second reading, he came to give you an example. All of us – whether bishop, priest, religious or consecrated, lay, married or single, whatever we are – need to become shepherds ourselves in the image of Christ.”

Listen to the homily here