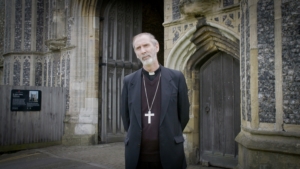 At a gathering at Colchester’s Abbey Gatehouse on Friday, Bishop Alan Williams recalled the suffering of the last abbot and said that much could be learnt from what happened in the past. He led prayers to mark the 900th anniversary of the dedication of the Benedictine Abbey of St John and prayed for the soul of Blessed John Beche (aka Thomas Marshall), who was executed outside its walls when he refused to acknowledge the spiritual authority of Henry VIII.

“I am very aware that his martyrdom took place on the raised green that we are standing on here outside the gatehouse. I imagine he could very easily see his abbey as he was hung, drawn and quartered. I feel great sadness that humans can be so cruel.”

Moreover, he said, the abbey’s destruction was a huge blow for the Colchester community. “For hundreds of years it was a place of education, care for the sick, succour for the poor. It did so much for the town’s citizens for so long. Christian faith and charity were lived here. When the abbey closed, the number of destitute people in the town increased dramatically. It was as if the welfare state was suddenly destroyed. “

In an interview for a documentary about the martyred abbot, he said there was much to learn from history. “I think because certain values – courage, faith, hope – last forever, we can learn so much from what happened so long ago.”

He said: “When we think of saints or blessed people, we tend to think that they were superhuman but we must remember that grace works through humanity. There was confusion and ambiguity about Blessed John but through it all there was a constant thread of faith and goodness, of following the Gospel.”

Blessed John may have wavered sometimes, he said, “but we must always remember that the discipleship of Christ is seldom an on/off button for life. We think of Ss Peter and Paul who also had moments of doubt or uncertainty but nevertheless the grace of God won through. Very clearly I think Blessed John gave his life as a martyr, showing the greatness of Christ, the love of Christ despite all that had happened on the way.”

He said a key thing for the Catholic Church was to remember that much is owed to those people of the past. “The Reformation was terrible in many ways for the Church. I think if we forget the faith and courage of so many people, we are the poorer for it today. It’s also about being aware, educating ourselves on what happened.”

He said values such as discipleship, Christian love, love of God, love of neighbour shone through the martyrs’ lives.

And the Bishop found parallels between what happened in the Reformation and the persecution of Christians in the world today. “I have sometimes heard it said that life in the Reformation, as Blessed John experienced it, was a bit like living in Stalinist times – where basic values, religious freedoms, love and respect were missing. And sadly, just as those were great issues in Blessed John’s times, they are real issues now too.” 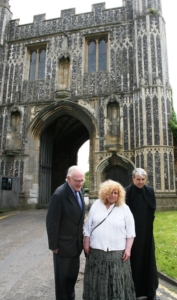 The event was attended by a number of local dignitaries including the Mayor of Colchester, Cllr John Elliott, Sir Bob Russell, local councillors and the Anglican Bishop of Colchester, the Rt Rev Roger Morris. Lord Petre, the Lord Lieutenant of Essex – a prominent Catholic – also attended, along with Dom Michael Clothier, Sub-Prior from Downside Abbey in Somerset, the senior community of the English Benedictine Congregation. They heard a short talk from Philip Wise, the head of the Colchester and Ipswich Museum Service, about the abbey site and history before saying prayers near the place where the enormous abbey church once stood. In a sign of Christian unity, Bishop Alan and Bishop Roger together blessed the small congregation.

The event was organised by the Colchester Catholic Heritage Group, which has been instrumental in bringing the English Heritage Gatehouse back into use as a site for services and raising the profile of both the building and the abbot. The Group won an Arts Council award to fund research and a website in recent years.

Local historian and founder member of the group, Jennie Guthrie-Stevens, said: “The defining personal moment for me was bringing together Lord Petre and Dom Michael.  Lord Petre’s family is representative of the state (although not officially on Friday), as it was at the time of the Dissolution, and Dom Michael represents the Benedictine Order – and is the first Benedictine that I know of on the site since Abbot Beche was executed.”