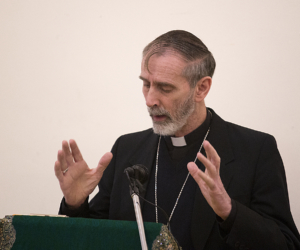 The enthusiasm of more than 160 people was fired by an optimistic Bishop Alan in a wide-ranging meeting of clergy and lay stewards on 24 February 2018. They came together to work on ongoing proposals for the renewal and restructuring of the diocese and heard good news stories from parishes that have already seized the opportunities for change. Amid presentations on evangelisation, the debunking of myths, the development of various strands of work and a priest’s perspective, they took part in discussions (Consolidated responses to round table questions) on practical ways to effect change.

Initially, they heard Bishop Alan talk about the ‘conversation’ that has been going on for the last two years, a discernment process that is unique among the dioceses of England and Wales.  “Some people do not like the notion of this conversation: a number think that I should just make a decision; others think that the ordination of women and married men is the answer to the need for more priests,” he said.

On his arrival in Brentwood, he said, he had soon found that he was being driven to be reactive rather than proactive in approach. “That is no way to run a diocese or show respect to priests or people.  I was looking for a compass bearing, which would leave room for the heart and for looking after people, rather than a sat nav.  This was why I started the conversation.” He said he wanted to involve the laity fundamentally in the process, basing his approach on that of Pope John Paul II who regularly spoke about collaboration, dialogue and discernment with those in the pews. 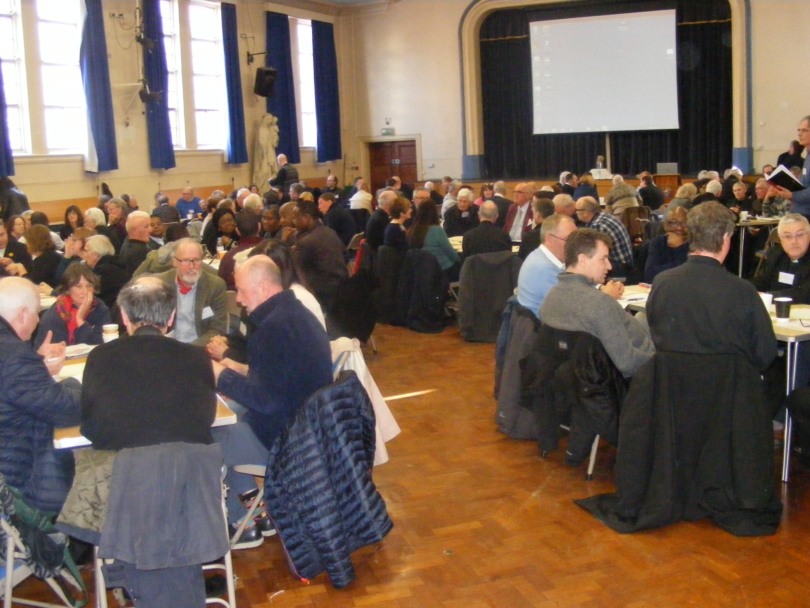 Bishop Alan thanked the stewards for their time and commitment so far and asked them to consider extending their service for a further two years. “You are too valuable to lose; and it would be too chaotic to have everyone leave at the same time.”  He suggested that they spend some time thinking about this, using prayer, conversations with their priest and fellow parishioners as a guide.  “It would be wonderful if a rededication of the Stewards of the Gospel were to take place during the Diocesan pilgrimage to Walsingham.”

Pope Francis on a cold-hearted world

He praised the quality of the discernment that had taken place during the process so far and the quality of life in parishes that had flowed from that. However, he said, this did not mean that everything was wonderful.  “I want to talk about the Pope’s Lenten message – he always has something ‘spot on’ to say.  The Pope took the verse in St Matthew’s Gospel about cold hearts and sinfulness for his theme.  He was addressing not just Catholics but the whole world.  He said that human beings today live in a cold-hearted way, which is related to sin all around us: refugees are drowning; children are starving; and people are being trashed.  We all work in the world, and its values can become part of ours.  That is a threat.  If we do not listen in the world, how can we listen in Brentwood?  How can we be respectful of people in the Diocese of Brentwood if we trash people in the wider world of work.  As the Pope says, it is difficult not to shiver in a cold world.”

“Discernment means looking towards God or not looking towards God.  The devil is the enemy of our progress, of human salvation, of human nature (St Ignatius of Loyola’s words, repeated by the Pope).  When we seek to make progress, we listen with respect, but there is always a pull to do the opposite.”  Much of the feedback about the conversation had been wonderful, he said, but he had excluded some people from the process because they would not listen or their approach was to attack, shout and confront.

So how should we handle them?  His advice was “do not be afraid”.  “In his document for the Youth Synod, the Pope talked about false prophets, false voices, snake charmers and others, and the destruction of lives through drugs, crime and transient relationships.  But the Pope talked far more about joy.  He had strong medicine for getting rid of the chill of the world: the Fire of Easter.  We start the Easter Vigil by lighting a fire.  The Easter appearances caused shock and surprise; we cannot proscribe the Risen Christ.  We have no control of these things.   He will surprise you and his fire will set you free.” 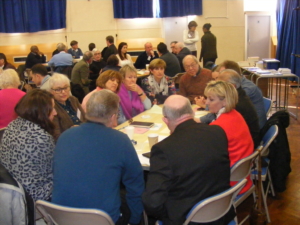 The Bishop went on to say that the two years of conversation might go on for two more years.  “This process is about the Fire of Easter, the grace of God,” he reiterated.  “Will we make mistakes along the way?  In his document for the Youth Synod, Pope Francis talks about taking a risk and says that we will make more mistakes if we remain still. Of course we will make mistakes, but if mistakes make someone kick off, my advice to them would be to get a life and to apply discernment.  It is better that we are doing this together rather than doing nothing simply to avoid making mistakes.”

The Bishop concluded by saying that he is still listening.  “At the end of the process I, as Bishop, will have to make the decisions (we were an episcopacy not a democracy) but everyone has my ear.”

Steven Webb, Director of Development for the diocese, said he was constantly hearing from parishes who were grasping the opportunity for change.  One priest had described the process as “breaking the mould, letting new possibilities in”, he said, citing a new altar server programme, outreach to a new housing estate, plans for a new youth Mass, the establishment of a social committee and the active recruitment of younger volunteers to parish work as fledgling initiatives.

“For some the pace is too fast, for others it is too slow, which for some means being a little patient and for others that they need to catch up,” he added.  He noted that for some the focus is still on how to change as little as possible, but this is not what we are being asked to do.  “I am more convinced than ever that change is not only necessary but that it can be very good for all of us and that we need to move beyond saying that we have always done things in a particular way and start thinking quite radically about how we might better use our gifts.”

“For many people it is difficult to get past the idea that we have a priest shortage crisis and my parish may not have its own priest in the future. I don’t think that is the right approach and I have some sympathy with a priest who wrote to us saying that actually we don’t have a priest shortage we have too many churches for them to serve.”

He addressed the issues and questions that people have repeatedly raised which, he said, are acting like anchors holding them to the past. “We need to dispel the myths that they are clinging to and get them on the journey with us.” Read more here (Steven Webb debunks some myths) on his views on questions such as ‘Why don’t we ordain married men?’ and ‘How can we cope with all these changes when we have a large housing development on our doorstep?’ and ‘Why do we need to change anyway?’ Statistics re falling Mass attendance and a loss of the young show that the status quo is not as good as some might think, he said.

He added an extra thought: “We are exhorted to change by the Pope, to become more missionary and more evangelising and to do away with the premise that we have always done it like this.  The world is changing and we need to change to bring the Good News to the new world.  This is about thinking outside the box, rather than about spreading ourselves more thinly.  It is about evangelising the diocese, and renewal and restructuring are the way to do that.” 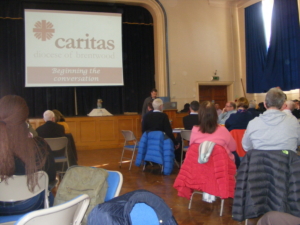 The meeting subsequently heard from: