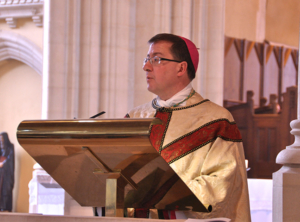 Bishop John Sherrington, Lead Bishop for Life Issues, has commented on the UK Supreme Court ruling that the Northern Ireland Assembly can bring in laws to create ‘buffer zones’ making it illegal to engage in a range of activities within 150 metres of an abortion clinic.

He warns that Clause 9 of the Public Order Bill currently passing through Parliament, goes much further than Clause 5(2) of the Northern Ireland Bill, and raises important questions about the state’s powers in relation to the individual in a free society – both for those with faith and those without.

The recent UK Supreme Court ruling on the human rights compatibility of so-called ‘Safe Access Zones’ around abortion facilities in Northern Ireland, heightens the bishops’ serious concerns around Clause 9 as amended of the Public Order Bill.  It will further energise those attempting to criminalise similar activities here in England and Wales.

The now ‘rights-compatible’ Clause 5(2) of the Abortion Services (Safe Access Zones) Northern Ireland Bill, seeks a complete ban on pro-life activities, including prayer and respectful witness, outside abortion clinics by means of criminalisation. Clause 9 of the Public Order Bill, goes much further than Clause 5(2) of the Northern Ireland Bill. It seeks to criminalise a range of activities within a 150m radius of an abortion clinic, under the broad premises of ‘interference’, which includes mere presence, seeking or attempting to influence, advise or persuade or otherwise expressing opinion. This broad formulation is disproportionate and unnecessary. As was accepted in a 2018 Home Office Review, there are already laws and mechanisms in place to protect women from the harassment and intimidation which this clause seeks to remedy. This Bill as amended would extend trends at a local level, which have seen Public Space Protection Orders (PSPOs) banning, amongst other activities, prayer and recitation of Scripture.

“The implications of both the UK Supreme Court decision and the proposed Clause 9 of the Public Order Bill, extend well beyond the perimeters of an abortion clinic. They have potentially wide-reaching implications for freedom of religion and speech. They also raise important questions about the state’s powers in relation to the individual in a free society, both for those with faith and those without.

We reiterate our concern that there is a risk, despite any other intent, that existing and proposed measures constitute viewpoint discrimination and disproportionately have an impact on people of religious faith. The bishops hold religious liberty to be essential for the flourishing and the realisation of the dignity of every human person, and is the foundational freedom of any free and democratic society. As Catholics we hold that life is sacred from the first moment of conception and we affirm the recent words of Archbishop Eamon Martin who stated:

“…to hold this truth, and to express it openly, is not something to be ashamed of, or to be excluded from public discourse, censored from newspaper columns, shut down in debates, or kept out via ‘protective buffer zones’! It is something we should be able to shout from the rooftops: All human life is sacred and precious! Choose life!”