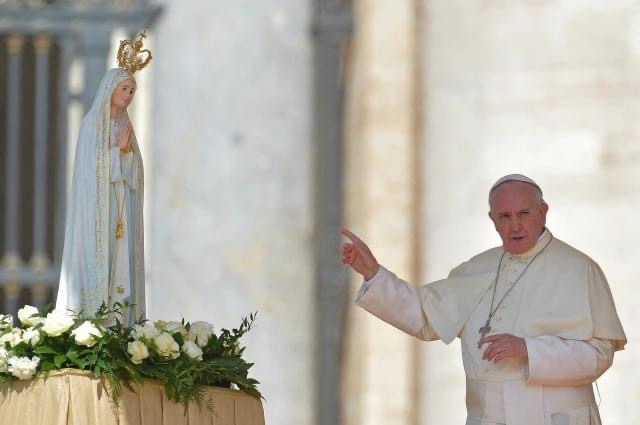 The Consecration of Russia and Ukraine to the Immaculate Heart of Mary will be pronounced by the Pope on the afternoon of Friday 25 March in St Peter’s Basilica. The act of consecration will be performed in communion with the local churches throughout the world.

The director of the Holy See Press Office, Matteo Bruni, has confirmed, “Pope Francis has invited the bishops of the whole world, along with their priests, to join him in the prayer for peace and in the consecration and entrustment of Russia and of Ukraine to the Immaculate Heart of Mary.”

The Pope will make the prayer in the afternoon of Friday, 25 March – the Solemnity of the Annunciation – in St Peter’s Basilica, on the occasion of the Celebration of Penance, scheduled to begin at 5 pm. The same act, on the same day, will be undertaken by the bishops of the world. Cardinal Konrad Krajewski, the papal almoner, will perform the act of consecration at Fatima as the envoy of the Pope.

Bishop Alan has asked parishioners in the Diocese to pray for the Ukrainians in recent weeks and is encouraging priests to respond to Pope Francis’ consecration invitation.  Parishes are planning prayers on that day. At Our Lady Immaculate in Chelmsford, for example, the Norbertines are saying the Rosary and consecration prayers at 4pm. As our bishop will be travelling back to the Diocese from Rome during the afternoon of the 25 March, Fr Martin Boland, the Dean of the Cathedral, will say the prayer on his behalf. The 9.15 am Cathedral Mass has been moved to 4.00 pm in order to coincide with the act of consecration.

In the apparition of 13 July 1917 in Fatima, Our Lady had asked for the consecration of Russia to her Immaculate Heart and the communion of reparation on the First Saturdays, stating that if this request was not granted, Russia would “spread her errors throughout the world, causing wars and persecutions of the Church,” and “the good will be martyred, the Holy Father will have much to suffer, various nations will be annihilated”.

Bishop Alan wrote to all parishes earlier in the week, commending the following Prayer of Consecration for both private and public use:

The Consecration of the Ukraine to Our Lady
Beloved Queen and Our Mother, Queen of the Holy Rosary, Help of
Christians, Salvation of the human race, Victorious Virgin, here we
humbly fall before you, that you may bring our sincere prayers to
Almighty God in the Trinity.

We come in full confidence that we beg for mercy and protection for
our Motherland in this dramatic time of war. Mother of Mercy, we ask
this not for our merits, which we do not count on, but in view of the
infinite goodness of your Heart and the saving Blood of Christ, your
Son.
May the suffering and cries for help of so many people touch you.
Have mercy on the wounded and victims of the shelling, orphans and
widows, all those who were forced to leave their homes and seek
refuge in safer places. Ask for mercy for those who gave their lives
defending their neighbours and our Motherland.

O Immaculate Mother, ask God for the grace of conversion, and we
especially ask for the conversion of Russia and all those who are
blinded by hatred or thirst for power. Pray for us first of all for those
graces which can change human hearts in an instant, and which will
prepare and bring such a coveted peace. Above all, bring us the gift of
spiritual peace so that the Kingdom of God may grow in peace and
harmony.

Queen of Peace, ask us for the grace of true reconciliation with God
and with each other, so that we can give each other a hand of help
and support.

Throne of Wisdom, inspire all rulers to make wise decisions and
strengthen the efforts of those who contribute to the end of war and
the return of peace.

Queen of the Apostles, ask for our pastors the gift of strong faith and
zeal in the celebration of the Sacraments, so that at this time we may
all be united at the Eucharistic table and in zealous prayer.
Heal the sick, strengthen all medical staff and volunteers who care for
the sick and wounded, ask for their spiritual and physical strength.
Be healing for the sick, strength for the dying and joy for their loved
ones.

Just as the Church and all mankind were consecrated to the Heart of
Your Divine Son, and in Him we hope to become an inexhaustible
source of victory and salvation for all, so we dedicate ourselves forever
to You and to Your Immaculate Heart, our Mother and Queen, that
Your love and care may ensure the victory of the Kingdom of God, and
that our Ukraine and all nations reconciled among themselves and
with God may bless and glorify You. Amen!