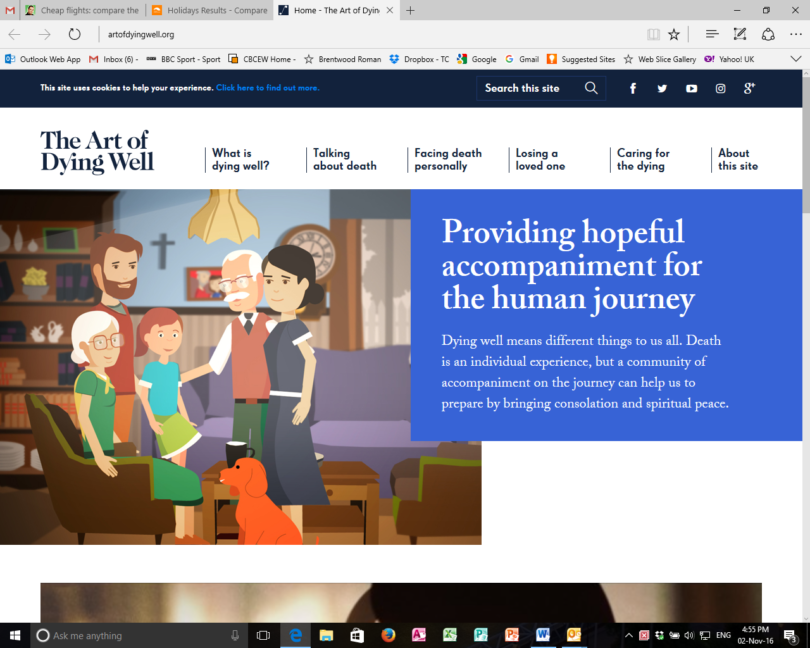 The Ars Moriendi or “Art of Dying” was a very popular fifteenth century manuscript designed to bring Christian comfort and practical guidance to a dying person and his/her family.   The original Latin texts and illustrations offered advice on the protocols and procedures for a good death. Key content included deathbed etiquette and prayers, as well as the five temptations that a dying person might face and the prescribed antidotes. The Ars Moriendi illustrated some fairly turbulent scenes, such as the devil trying to snare the soul of a dying man and battles raging between the angels and the demons at the deathbed. These works were popular and visceral because death was daily on the doorstep.

The Catholic Church has 2000 years’ worth of experience of helping people to die in peace and a treasury of resources and reflections on death, dying and eternity that the Bishops of England and Wales would like to open up to everyone.  Inspired by the comfort provided by this popular work, they have produced an innovative new digital space on the subject of ‘Dying Well’.

The Art of Dying Well is a new website that offers a helping hand to those grappling with issues around death and dying.  Based in the Catholic tradition but open to all, it features real-life stories about the highs and lows of dealing with the final journey.  Professionals in palliative care, ethics, chaplaincy and history have informed the site content.

The month of November in the Catholic Church is dedicated to praying for the dead and is the traditional time to visit the graves of loved ones.  It is commonly known as the Month of the Dead.  We are invited most particularly during this month to remember and pray for our friends and family who have died and for those who have no one to remember them.

The Art of Dying Well Instagram account will host a ‘Remember Them’ virtual memorial wall – inviting people to post pictures and memories of a loved one who has died or is dying.  By tagging @artofdyingwell on Instagram, these names and photos will then be shared with five convents and abbeys who will remember and carry in prayer those whose memory is kept alive in these snapshots.  The religious sisters and brothers will also pray for those who have no one to remember or pray for them.

As a Catholic approaches death, there are a series of comforting rituals that can help him or her to prepare spiritually for the final journey.  In www.artofdyingwell.org these rites and special Prayers for the Dying are illustrated in an animation which features the fictional story of the Ferguson family narrated by the English actress Vanessa Redgrave.

The poet W.H. Auden said that death is “like the distant roll of thunder at a picnic”. That sums up how many of us think about death. We know it is coming eventually, but we are rather more focused on the here and now.  The Art of Dying Well aims to help people keep death in mind, so as to fully embrace life now.

Jim, 51, was diagnosed with Non-Hodgkin Lymphoma in October 2012 and spent four months in hospital. He suffered two infections and almost died. He was treated with four cycles of intensive chemotherapy which left him with moderate brain damage that affects his memory and a susceptibility to colds and flu. Yet, he has taken up weight lifting and power lifting and considers himself fitter than he has ever been. He says the illness “pressed the reset button” on his life.

Everyone will have a different experience of dying and of what dying well means – it is part of what makes us unique.

Sister Anne Donockley, an Augustinian nun from Cumbria, who died of a heart condition in April 2016, said: “On a coffin there are two dates; the date of your birth, the date of your death and there is a little dash in between the two – the hyphen. The most important of those three things on the coffin is actually the hyphen, representing your life between birth and death.”

According to Dr Kathryn Mannix, Consultant in Palliative Medicine, death shouldn’t have to be seen as a depressing thing to face. She says, “I knew from my hospice work that most dying people are not depressed, and in my clinic many people have lived to enjoy the last weeks and months of their lives. It’s wonderful to see them regain their enjoyment of life again, when they simply expected to remain miserable until they died.”

The Art of Dying Well launched on All Saints Day – 1 November – with a Mass in Westminster Cathedral celebrated at 17.30 by Cardinal Vincent Nichols.