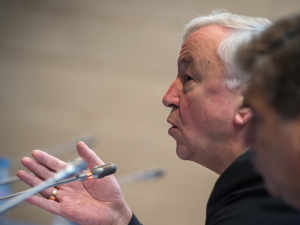 At a special event at the United Nations, Cardinal Vincent Nichols today stressed to delegates that the cornerstone of the fight to eradicate human trafficking is effective international cooperation at all levels. He was speaking at a special Side Event at the UN’s New York headquarters jointly organised by the Permanent Observer Mission of the Holy See to the UN and the Santa Marta Group.

The UN member states have made a commitment to “eliminate all forms of violence against all women and girls in the public and private spheres, including trafficking and sexual and other types of exploitation,” “take immediate and effective measures to eradicate forced labour, end modern slavery and human trafficking,” and “end abuse, exploitation, trafficking and all forms of violence against and torture of children” by 2030.

The Cardinal spoke on behalf of the Santa Marta Group, an international network of cooperation and initiatives founded by Pope Francis in 2014 to strengthen and coordinate the global response to combatting human trafficking and all forms of modern slavery. He said: “Human trafficking and slavery radically strips a person of (God-given) fundamental dignity, reducing them to the status of a commodity. It is an evil crying out to heaven. That there are over 20 million people callously held in modern slavery in our world today is a mark of deep shame on the face of our human family that no words alone can remove.”

The Cardinal went on to discuss the work of the Santa Marta Group which “brings together the leaders of law enforcement agencies from an increasing number of countries – 36 at the last count – and the resources of the Catholic Church, in order to fashion shared alliances of effective action in the fight against human slavery.”

He cited one root of this movement as a remarkable partnership built in London some years ago between religious women and the London police force, Scotland Yard. “This partnership transformed the effectiveness of operations to rescue victims, care for them and pursue to prosecution the perpetrators of this horrendous crime. I realised then the effectiveness of such partnerships, especially between unlikely partners. It was the fruit of the hard work of building trust, a work made up of many demanding practical steps, requiring change in mindsets and procedures. For one thing, it was essential that the police gave to the Sisters the assurance that the victims of trafficking would not be prosecuted, but rather they would be helped.”

The Cardinal gave examples of successful alliances built since then through the Santa Marta organisation in different countries and continents. He added: “The core of the vision and work of Santa Marta, then, is to foster a symbiotic relationship between law enforcement and the resources of the Catholic Church in this great fight.”

He continued: “Such international partnerships require not only a shared motivation but also some clear key aims. For us they are univocal: the well-being of every victim of human trafficking, for it is the victim who must always be central to our efforts; the enhancement of the work of law enforcement: the breaking up of criminal networks, the arrest and prosecution of the perpetrators; and thirdly the strengthening of the legal frameworks within which this work is carried out.”

He added: “Pope Francis remains a central and inspiring figure. He is direct and blunt in what he expects of us – effective action on the ground which frees prisoners, comforts the victims, serves their well-being and generates new hope in a world in which there is far too much suffering, poverty and grief.”