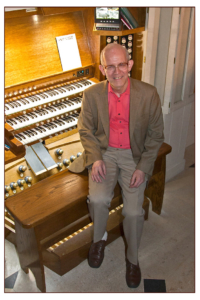 Stephen started playing at 8pm on
Friday 8 April, and inclusive of three short breaks, continued until 8am on Saturday 9 April, although he admitted to feeling “a little tired” at 3.30am on the Saturday morning! By request, he began with Parry’s Jerusalem, and ended with Widor’s Toccata (which he played for two members of the Cathedral congregation whose wedding anniversary fell on the Saturday).

The play-a-thon has so far yielded over £1,700. Anyone wishing to support the Cathedral Choir may do so online at www.justgiving.com/Stephen-King19, and all donations are very gratefully received.