Early June saw parishes and schools celebrate the Queen’s Platinum Jubilee while later in the month three venerable priests came together for a Diamond celebration to mark their collective 180 years of priesthood.

Schools planted trees, held assemblies and parties as the Jubilee weekend approached. Across the Diocese prayers were said for the Queen at Masses on 5 and 6 June and the National Anthem was sung. Many parishes, including the Cathedral Parish and Maldon, had picnics to celebrate.

Bishop Alan marked the Queen’s 70 years on the throne with the planting of a tree in the Cathedral grounds on Pentecost Sunday, as part of the Queen’s Green Canopy project. He told the Confirmation candidates present that the Queen’s example of wisdom, gentleness, faith, hope and peace was one that they would do well to imitate. “I encourage you to live out those qualities, to follow her example. She embodies many of the fruits of the Holy Spirit,” he said.

Bishop Alan talked about the long history of ‘Jubilee’, which dates back to the Old Testament. “In the Church a Jubilee took place every 50 years. Things were ‘reset’ in society – debts forgiven, slaves freed and so on. So Jubilee means a reset.”

He suggested that the first reading about Pentecost involved a ‘reset’ by the spirit of God on the Church and the world. “The disciples were locked in a room, in fear, in captivity. The Holy Spirit came and reset things for them – they were able to go outside and became true disciples of Christ,” he said. “We believe the same thing happens at Confirmation.”

He asked the candidates to think about the gift they would like from God. “The gifts of God are so varied – fortitude, strength, wisdom, gentleness…you might want peace or faith. If you don’t have faith in yourself or others, you can’t have faith in God. So name that gift.”

He talked about the planting of the tree to mark the Queen’s Jubilee, a task he later shared with the candidates and the Lord Lieutenant Jennifer Tolhurst. “It is to be planted in thanksgiving and celebration of 70 years of peace, gentleness, strength and wisdom shown by the Queen. And I am making a promise to God at the same time, planting for the future of our planet. I ask you to share that commitment.”

The Queen’s Green Canopy (QGC) is a unique tree planting initiative created to mark Her Majesty’s Platinum Jubilee in 2022 which invites people from across the United Kingdom to “Plant a Tree for the Jubilee”. With a focus on planting sustainably, the QGC aims to create a legacy in honour of The Queen’s leadership of the Nation which will benefit future generations. 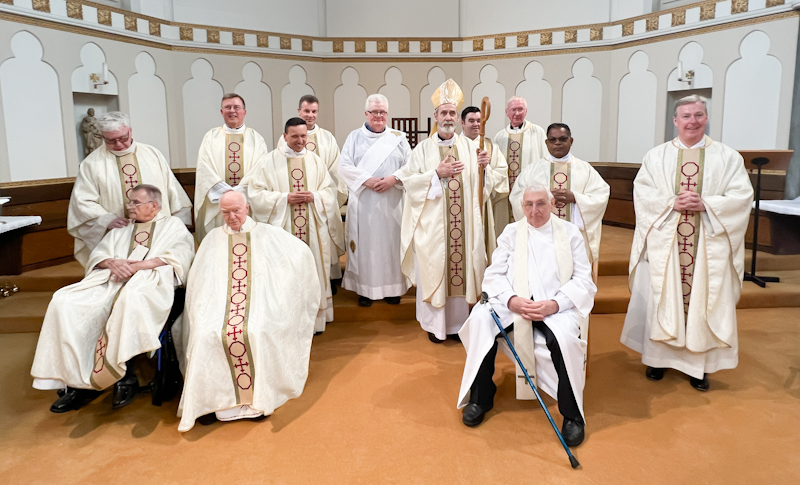 Later in the month Bishop Alan presided at a celebratory Mass at Ss Peter and Paul in Ilford to mark the Diamond Jubilees of Frs Kieran Dodd and John McKeon, ordained together on 10 June 1962, and Fr George Towler, who became a priest just six days later.

After the Mass, which was attended by clergy from across the Diocese as well as many lay people, a  reception took place in the parish hall. Two weeks later, the Ilford parish had the joy of hosting the ordination of Brentwood’s newest priest Fr Damien Wade.