Bishop Alan Williams sm has contacted parishes to tell them of the death of Fr Kieran Dodd. He says: “Please pray for the repose of the soul of Fr Kieran who died at 1 pm today at St Michael’s Care Home, Clacton-on-Sea. May he rest in peace.”

Fr Andrew Headon, parish priest at Ss Peter and Paul, Ilford, shared the photo below: “It was taken last week in Lourdes at our ACROSS pilgrimage which Fr Kieran thoroughly enjoyed. Parish priest here from 1973-88, he’ll be missed by so many to whom he ministered. His funeral will be here at Ilford, details to follow.” 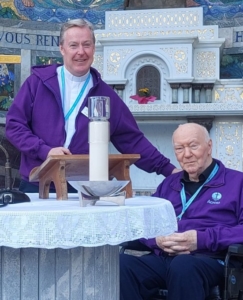 Father (James) Kieran was born on 3 May 1932 at Boyle, Co. Roscommon. He studied for the priesthood with the Kiltegan Fathers with the intention of becoming a missionary in Africa. However, his health was not considered strong enough for such a vocation so he transferred to St Patrick’s College, Thurles, and in 1960 was accepted by Bishop Wall for the Diocese of Brentwood.