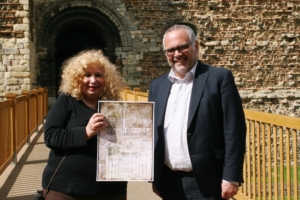 A local Catholic historian in Colchester with a particular interest in the medieval Abbey of St John has made yet another exciting discovery about its history. In 2014 Jennie Guthrie-Stevens found a copy of a long-forgotten report made when the Abbey’s Gatehouse was refurbished in the 1840s, which gave detailed information about the restoration and the original building. Now Guthrie-Stevens, who is part of the Colchester Catholic Heritage Group, has made another breakthrough in the story of the Benedictine Abbey itself.

She has traced the provenance of a picture thought to depict the execution of the last abbot by Henry VIII’s men, to a previously unknown medieval document about the abbey.

“For years we have been using a copy of a picture held by the Diocese of Brentwood in our talks and leaflets without really knowing where it had originally come from and if it really was linked to the Abbey,” she says. “But my recent research has proved its authenticity and uncovered its true significance.”

She found a mention of the picture with its ‘gentleman on horseback’ in the foreign and domestic papers of Henry VIII and then through further research traced the original to the British Library. “The picture we had been using was part of a much larger one adorning a previously unknown document detailing the abbey’s lands and goods. The gentleman on horseback is the Earl of Essex. And the  survey was commissioned by Henry’s Chancellor, Thomas Cromwell, a month after Abbot Beche’s execution. Written in Medieval English, it is a fascinating document giving an inventory of the ‘attainted’ abbey’s possessions, which were to be seized by the Crown.”

The use of the word ‘attainted’ is particularly interesting, she says, because it signifies that the abbey was not simply handed over by its abbot, through the dissolution of the monasteries, as so many were. “It was taken by force after the abbot was executed. And the same is true of the abbeys of Reading and Glastonbury, whose abbots are also seen being executed in the picture. These Benedictines were true to their Benedictine rule which required total loyalty to your abbey and fellow monks.”

The British Library has agreed to the making of a facsimile of the Abbey survey, which Guthrie-Stevens presented to Colchester’s Councillor Tim Young, Portfolio Holder for Culture and Regeneration and Deputy to the Leader of the Council, (above) at an event at the Castle Museum this week. 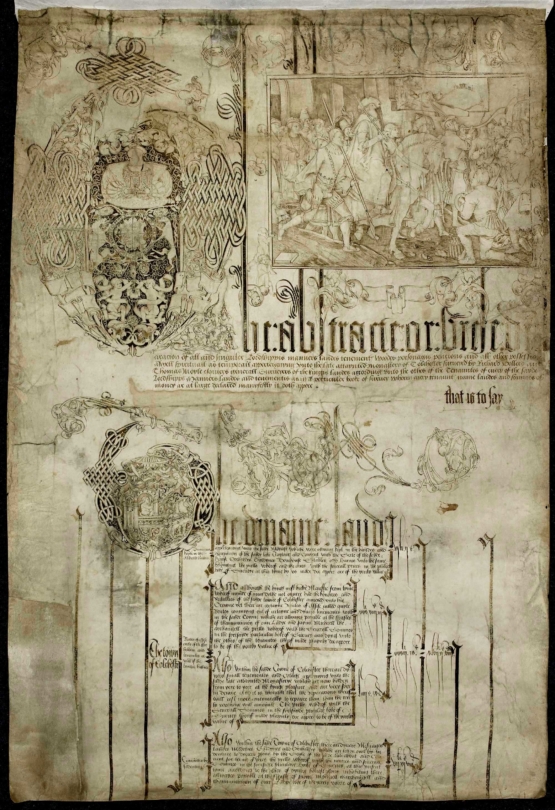 hilip Wise, Heritage Manager at Colchester and Ipswich Museums, is very excited about the find and says that the Museum plans to borrow the original scroll from the British Library and put it on show. He hopes that it may reveal further details about the abbey.

“The discovery of the document is very significant for us in the borough: St John’s Abbey is one of our most significant stories and is of great interest in terms of promoting the history and heritage of the town.”

He praises Guthrie-Stevens’ perseverance in researching the history of the Abbey over a number of years. “She is very thorough, diligent and determined: she doesn’t give up. Comparatively few people have the time and determination to do this sort of work and she has filled in a lot of gaps.”

Councillor Young said: “I am delighted that the Council through its Museum Service has been able to support this ongoing research into the history of one of Colchester’s most important buildings. The story of St John’s Abbey is familiar to many but this new discovery provides an additional insight into the fate of the abbey at the time of its closure in 1539. The Council is very grateful to the Colchester Catholic Heritage Group for its work in promoting the heritage of the town for benefit of both residents and visitors.”

Dr Michael Carter, Senior Properties Historian at English Heritage, said: “The discovery of this document is quite a remarkable find and reveals previously unknown details about the history of St John’s Abbey Gate. Not only is the document of historical importance, but the drawings included within it are also of considerable art historical interest.”

The Colchester Catholic Heritage Group has been instrumental in bringing the Gatehouse back into use as a site for Mass on significant dates and raising the profile of both the building and its last abbot, Blessed John Beche, alias Thomas Marshal. It aims to promote the heritage and wider understanding of Catholics’ place in history and the community of the town. The Group won an Arts Council award to fund research and a website in recent years.