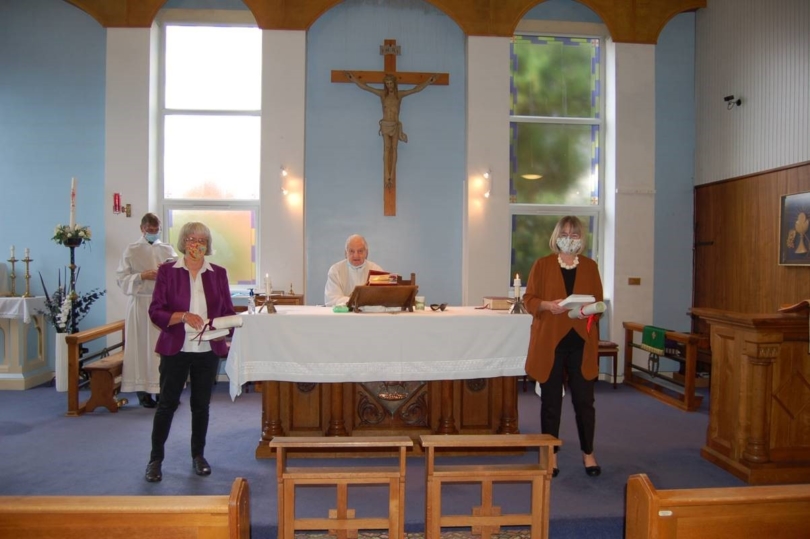 At the end of last month Margaret Howett (left) and Claire Reeve received a Papal Benemerenti medal and scroll for their long and exceptional services to the Dunmow Catholic community. The medal and scrolls were presented by Fr Martin Nott at Our Lady & St Anne Line church in Dunmow. 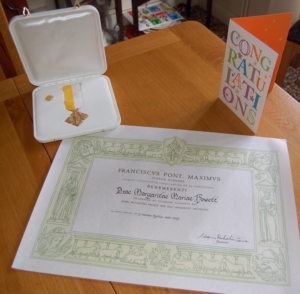 The Benemerenti Medal is an honour awarded by the Pope for service to the Catholic Church. Originally established as an award to soldiers in the Papal Army, it was later extended to the clergy and lay people. Literally translated Benemerenti means ‘well merited’, or person of ‘good merit’. The medals are sparingly given to those who have given at least 25 years’ of dedicated service and are in very good standing in their community. Recipients are nominated by the parish priest. Those nominations go to the Bishop for endorsement and then on to Rome for consideration. In the course of his 15 years or so in the parish, Fr Martin has nominated four parishioners. He said: “I am very pleased to present these two medals. The parish is very proud of both Claire and Margaret.”

Claire has been a tireless fundraiser for the parish and charities like Macmillan over more than 25 years while Margaret has worked for a similar period on safeguarding and supporting liturgy, both at Dunmow for the last two decades and at her previous parish in Chelmsford. “I deal with all the rotas and safeguarding checks for the readers and Eucharistic ministers, visit the housebound, and represent the parish on Churches Together in Dunmow and on the Deanery Pastoral Council.” During Fr Martin’s 18-month absence from the parish through illness, she worked with others to run Eucharistic services in the parish every day. “A lot of what we do is very much about teamwork,” she says. “If other people don’t help, you don’t get anywhere.” 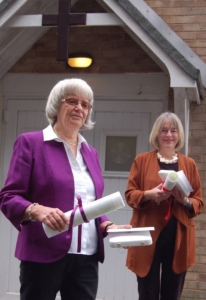 Claire agrees. She has run the parish 100 Club for 29 years, raising around £40,000 – half of which has gone out in prize money. A member of the Catholic Women’s League, she has also organised dances, socials and quiz nights with the proceeds split between the parish and local charities – and is a stalwart for Macmillan Cancer Support. “We have a wonderful community in Dunmow and I have great support from parishioners and others. Despite the coffee morning being a non-event this year due to Covid, for example, we raised £1,600 for Macmillan.”

Claire and her husband have been shielding as he has cancer, so she and Margaret received their medals at a midweek Mass where numbers would be fewest. “I felt quite emotional,” says Claire. “I was brought up in Dunmow and there is plaque to my parents in the church. They were fantastic role models who inspired me to carry on and help where I can. This is such an honour – Mum and Dad would have been so proud.”