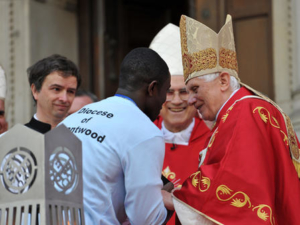 One of the most memorable images of the Papal Visit in September, 2010, was that of the young student, Paschal Uche, welcoming Pope Benedict XVI, on the steps of Westminster Cathedral after celebrating Mass, in front of thousands of cheering young people. A decade later, Paschal was ordained a priest by Bishop Alan Williams sm in Brentwood Cathedral. He is now serving at St James the Less and St Helen’s church in Colchester.

In an ICN exclusive, Fr Paschal reflects on that day, and the life-changing experience of meeting Pope Benedict XVI:

No matter how inevitable or indeed no matter how unexpected, death has a powerful way of gripping the heart and bringing the mind in to sharp focus of the person who has just died.

Since hearing of the death of our spiritual shepherd and father Pope emeritus Benedict, I too have been deeply moved and focused to reflect anew on his impact on my small story, our generation and the Church.

Born in Stratford East London, my first stirrings of a vocation did not come till I was in the 6th form at Trinity Catholic High School in Woodford Green. At the time, though growing, my desire to be a priest was little more than a weak aspiration, something I thought about occasionally. Even as the longing grew, talk about becoming a priest was initially something I kept close to my chest, an inclination I shared with a few friends and some priests, but no one else not even my family, for whom I thought rightly that it would not be something to celebrate. No one but close friends that is – until on the morning of the 18th of September 2010 when I had the privilege of welcoming Pope Benedict XVI to the UK on behalf of the youth of our country.

I had witnessed with growing joy the galvanising effect of the Papal visit from Glasgow and Twickenham. Excited for the opportunity to welcome the Pope I had played the scene in my head hundreds of times, how to stand, what to say how to greet etc. However, the rigid rehearsed gestures and protocol melted away beautifully as just seconds in to the speech I saw something I had not anticipated. There was the Pope looking back at me with a gentle incessant smile that almost beckoned me to keep going to say more.

Pope Emeritus Benedict often referred to the Christian faith as not being reducible to a philosophy or an ethical idea but an encounter an event. True to his words he lived something of that spirit of encounter in that moment – I felt that call out something deep in me and the words much rehearsed were given permission to become flesh and the encounter became alive and life giving for me.

When all was said and done it was time to shake his hand, perhaps kiss his ring or simply bow. Once again protocol gave way to an unexpected embrace and bizarrely I remember the softness of his face as we embraced. Moments later it was time to take pictures. At this point he asked me about myself and I used this opportunity to tell him I was considering priesthood. He wasted no time in assuring me of his prayers and that, I thought, would be that.

I must confess at that time I did not know much about his writings, theology or influence, but even in the address immediately following my welcome to him, there was an introduction to his clear thought, profound faith and personal conviction about the love of God in Christ.

Needless to say my love for the Church grew and my desire for the priesthood went the same way. Just a few years later I would find myself in St Mary’s Oscott in Birmingham studying for the priesthood. Seminary could sometimes be divided by something small like breakfast menus or something big like Liturgy (heated discussions in to the late night!) but one thing I can safely say that we were united in was a love for the teachings, writings and works of the Pope Emeritus Benedict. The beauty and depth of his work made us love Jesus more. The paradox is that, in his outward expression he lacked the charisma of JPII or the personality of Francis but when you read his works you convinced that above all this was a man of prayer and profound love.

Personally, I would read Pope Emeritus Benedict’s book Jesus of Nazareth every Lent in to Holy Week as my meditation and preparation for the celebration of the Easter Liturgies. I would chose this again and again because I find that his approach is compelling, comprehensive and clear.

My generation of priests where those who sprang up buoyant from the Benedict Bounce, a phenomena associated with how the papal visit put fresh life in to the Catholic Church in Britain. I think it is all the more compelling that on face value alone it was nothing exterior that typically we would associate with celebrities that intrigued us. It was his gentleness and warmth together with his phenomenal mind and theology that spoke to us of his heart of prayer. He was clearly a Holy man and ultimately Holiness is the most attractive thing in the world.