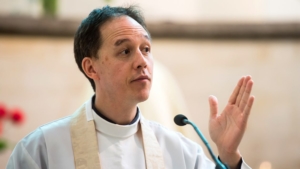 Fr Stephen Wang has been appointed as the new Rector of the Venerable English College in Rome.

Fr Wang will replace Mgr Philip Whitmore, who has been Rector of the VEC since 2013. The VEC was founded in 1579 and since then has prepared priests to serve mainly in England and Wales, as well as being a home to priests undertaking further studies in Rome. There are currently 27 seminarians in formation for the priesthood and five priests engaged in further studies.  Most study at either the Gregorian University or the Angelicum.  As well as seminarians from England and Wales, there are seven from the Nordic countries, two from Ireland and one from Canada.

Fr Stephen Wang, who studied at the VEC as part of his formation, will start his new ministry as Rector at the start of the new academic year in September. He said:

“I’ve been incredibly happy as a university chaplain in London, and it will be very hard to leave Newman House chaplaincy centre and say goodbye to students and staff across the universities. But I’m delighted to be starting at the Venerable English College in Rome. I have a great love for the seminary and for the city, and a love for the priesthood and the work of formation. I’m really looking forward to getting to know the seminarians and staff, and to building on the wonderful work that Mgr Whitmore has been doing as Rector. And yes, I’m also looking forward to savouring an authentic Roman pizza again and the finest ice cream in the world.”

“I am delighted by the news of Fr Stephen Wang’s appointment as Rector of the Venerable English College and I thank the Lord for the eight truly blessed years I have been privileged to spend in this role.  The recent health crisis has made us more aware than ever of our need for priests and it is both a responsibility and a joy to be charged with the formation of priests to serve the next generation. We assure Fr Stephen of our prayers as he prepares for his new ministry.”

Cardinal Vincent Nichols said:
“I welcome most warmly the appointment of Fr Stephen Wang as the new Rector of the Venerable English College, Rome. Fr Stephen will bring to the College all his experience as a university Chaplain as well as his passion for proclaiming the Gospel in contemporary ways, a gift so much in keeping with the great traditions of the College. I thank Mgr Philip Whitmore whole-heartedly for his years of tireless service to the College and I look forward to welcoming him back to his Diocese in due course.”

For more information about the VEC go to Venerable English College (vecrome.org)

Fr Stephen, 54, is a priest of the Diocese of Westminster. He was born in London and grew up in Harpenden, Hertfordshire. From 1992 to 1997 he was in priestly formation at the Venerable English College in Rome. From 1997 to 2001 he worked in parish ministry in Dollis Hill, London. From 2001 to 2005 he studied for a PhD on the subject of human happiness at Cambridge University, and assisted at Fisher House University Chaplaincy for two of those years. From 2005 to 2013 he was on the formation team at Allen Hall Seminary, teaching philosophy and theology, and with the role of Dean of Studies for the last five years. During this time he was also a visiting priest at Wormwood Scrubs Prison and a confessor at Notting Hill Carmel. Since 2013 he has been Senior University Chaplain in the Diocese of Westminster, Catholic Chaplain at the London School of Economics, and also Vocations Director for the last two years.