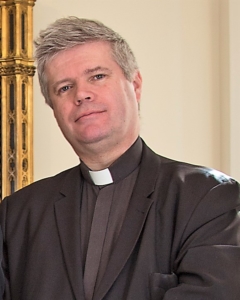 Diocesan archivist Fr Stewart Foster celebrated his silver jubilee of ordination recently with a thanksgiving mass in Brentwood Cathedral on Saturday 12 September and another – sung in the Latin form – at the Convent Chapel, Canning Town on the following evening.

Fr Stewart Foster grew up in Ingatestone and was educated at St Helen’s Primary School, Brentwood, and at Brentwood School. In 1985 he entered the Servite Order and studied for the priesthood at Heythrop College, University of London, and Blackfriars, Oxford. He was ordained as priest by Bishop Thomas McMahon at Our Lady of Dolours, Fulham Road, Chelsea on 12 September 1992, having previously served as a deacon in South Africa, Swaziland and Lesotho.

After working in the Servite parishes in Salford and Fulham Road, he entered the Diocese of Brentwood in 1994 and was incardinated in 1998. As an assistant priest he has served at Wanstead, Leigh-on-Sea and Grays, and as a parish priest at Eastwood. Since 2001 he has worked as Diocesan Archivist while acting pursuing historical research and writing, acting as a supply priest and as chaplain to foreign language groups. He resided at Forest Gate and Custom House until 2013 and is now living at Brentwood. He holds a PhD in Educational History and is a Fellow of the Royal Historical Society and the Society of Antiquaries of London.