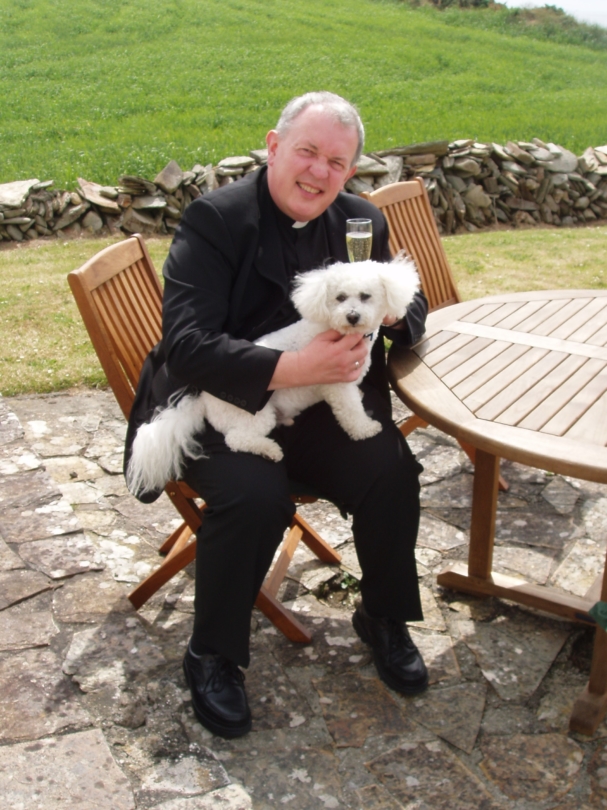 On 5 August the parish of St Edward the Confessor in Romford announced the death of its beloved parish priest, Fr Tom Jordan. Almost immediately, the messages and prayers began to arrive at the parish office from those who had experienced his ministry – in Grays, Leigh-on Sea, Basildon and Romford, where he has been parish priest since 2003. The many messages on twitter testified to the regard in which he was held.  One example reads: “Such sad news. Father Tom performed our Wedding Mass in 2018 and he made our day so special. He was the kindest man, such a role model and very understanding.”

Fr Dominic Howarth, who has known Fr Tom for 25 years, and has been supplying in the parish during his illness, said: “He had a really pastoral heart and the messages echo that kindness to people. He epitomised what Bishop Alan was talking about in terms of priesthood at Saturday’s ordination of Fr Paschal Uche. Even when he was seriously ill, he was still focused on people’s pastoral needs, dictating emails about baptisms from his sick bed.” Bishop Thomas, who ordained Fr Tom 31 years ago, agrees. “He was a great pastoral priest and had huge empathy with people – in joy and in sadness.”

Alongside that parish and community focus, Fr Tom also had a high flying national role. In 2004 he was elected Chairman of the National Conference of Priests of England and Wales and Executive member of the Council of European Conferences of Priests, and travelled widely as a result.

Born in London in 1954, he was the first child of Irish parents – with younger sisters, Maria, Monica and Teresa. He was baptised at St Anselm & St Cæcilia in Holborn and educated at Bishop Ward School, Dagenham. After 6th Form he went to Bournemouth College of Hotel Management & Catering. He subsequently worked in industry for 10 years, as a skilled chef in London hotels and at the BBC, and in sales and marketing in the frozen food industry. Then came a radical change of direction. On the parish website, Fr Tom wrote: “On the 13 May 1981 when Pope John Paul II was shot, my life changed. Formation for priesthood began at Campion House Osterley, then at St John’s Seminary, Wonersh.”

As parish priest at Romford, he was closely involved with St Peter’s Primary School, supporting its liturgical life, attending Advent, Easter and Nativity events and helping to celebrate its 40th and 50th anniversaries. Headteacher Jenny Waterfield writes: “Fr Tom was very much loved by everyone at St. Peter’s – pupils, parents, staff and governors. We all felt the warmth and compassion he showed to each and every one of us. We all appreciated the genuine interest and care he showed when he visited our school. The children loved his visits and their small faces would light up as they saw him around the school, enjoying ‘high fiving’ him and being truly excited to see him.”

He was also a real presence to the staff, she said, and everyone felt much loved and comfortable in his company. “Fr Tom was a huge part of the life and loving of our St Peter’s Catholic Primary School and will be forever held in our hearts and truly missed.”

In 2013, Fr Tom’s kindness and empathy brought him another appointment, that of Amicus Clero – a role which involves being a friend to any priest in the diocese at any time. The role was testament to his qualities, says Fr Dominic. “Any priest could see him and he would listen in a pastorally sensitive way, helping them discern their way forward. It is a very significant role in the diocese and takes a particular kind of character.”

Renowned for his culinary skills and sociability, Fr Tom was a very natural host and had lots of friends, he says. “And he was unfailingly cheerful – even during his time of illness. It never got him down. He was always joyful, with an unchanging faith.”

Fr Tom himself certainly found the role of ‘friend to the clergy’ fulfilling. He posted on the parish website: “Hobbies, when possible, include good food and wine, theatre and, above all, ministering to priests.”

Thank you to the many who have sent prayers and kind messages in relation to Fr Tom – they are giving great consolation to his family. Some people have asked about cards: these are best addressed to his sisters Maria, Monica and Teresa, and could be sent c/o the presbytery in Romford. Fr Tom did not want flowers but asked for donations to be made to Cancer Research UK, specifically for Prostate Cancer. These can also be sent to the presbytery.

Fr Tom died in great peace – he had a true interior peace about all that was happening. At the end he was surrounded by his three sisters, Julia (his parish administrator, with him since 2003) and me, in the presbytery that had been his home for 17 years, in the room where he had seen so many people, and offered so much pastoral kindness. He had been anointed by Fr Phillip, blessed with Holy Communion on the Feast of St John Vianney, and was prayed for throughout his final hours.

Funeral arrangements are not easy in these times of Covid-19, but the family wish to give as much opportunity as possible for people to pay their respects to Fr Tom. In the fullness of time, God willing, we will be able to celebrate in a place where we can all gather together and remember Fr Tom in a way which also honours another of his funeral instructions – “substantial hot/cold buffet and beverages”.

The church address is: St Edward the Confessor, Romford RM1 4AT (parking off Church Lane, behind the church, approached from St Edward’s Way)

Fr Tom will be received in a service with his family on Tuesday 18 August; the church will then be open from 6pm-9pm for people to come and pray. We will be arranging this in timed groups; at 6pm, 6.40pm, 7.20pm and 8pm groups of up to 50 people will be able to come into the church (we can take 65 for Sunday Masses, but this includes the gallery). We will give people time to settle, and pray one decade of the rosary with each group, with a time of silence before people leave at the end of each 25 minute slot. We will then clean before the next group comes into the church.

In terms of the funeral, clearly we are very restricted. Indeed, we are even more restricted than for a Sunday Mass; unless the Government changes anything in the next few days, we are anticipating 30 people at the Mass, with approx. 18 family and 12 clergy who were particularly close to him.  The service will be livestreamed and the link will be shared with all parishes.

Many priests have already said that they will be offering their morning Mass for Fr Tom on or near the day of the funeral, and the family are wonderfully grateful for this; although we cannot gather physically, the sense of prayers being offered from across the Diocese, and from other parts of the world, is a beautiful consolation.

There will be a gap between the end of the funeral Mass and the cortege leaving the church, to allow parishioners watching and praying from home to gather along Park End Road, where the hearse will drive in slow procession on the way to the cemetery. To begin the procession we will sing the Salve at 12.30, by the doors of the church.

Fr Tom is being buried in the grave next to one of his predecessors at St Edward’s, Mgr Matthias Kearney, in Romford Cemetery.

Latest information and links are now all on the parish website: www.stedwards-romford.org.uk