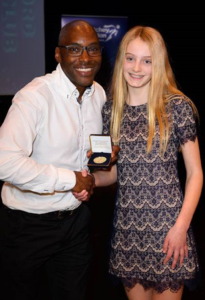 Grace Randall, a student at New Hall School in Chelmsford, has received a Jack Petchey Achievement Award in recognition of her commitment to synchronised swimming and her success in the sport after being nominated by her coaches at Chelmsford City Swimming Club. The award ceremony took place at the Civic Theatre in Chelmsford, and Grace was thrilled to be given her award by Olympic silver medallist Mark Richardson.

New Hall School is a boarding and day school for students aged 3-18. It has a Catholic foundation and ethos, which welcomes those of all backgrounds. The strong pastoral care structure at the school supports students in their endeavours, allowing them to achieve success in a wide variety of fields.