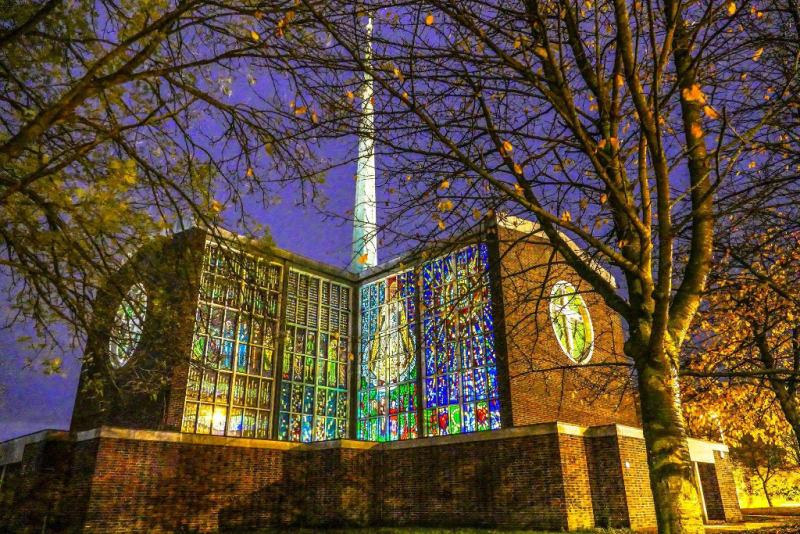 The National Pilgrim Virgin Statue of Our Lady of Fatima will be visiting Harlow over the weekend of the 14/15 October as part of the centenary of Our Lady’s appearances at Fatima. Parishioners from across the diocese are encouraged to visit the church of Our Lady of Fatima in Howard Way, Harlow during that weekend when a number of rites will take place.

The statue, which was blessed by Pope Paul VI at Fatima in May 1967, and given to England by the Bishop of Fatima in 1968, is visiting various cathedrals and churches around the country. On May 13, 1971, this statue was crowned at Walsingham by Bishop Alan Clark, and it was also blessed by Pope John Paul II during his visit to Britain in 1982.

The statue is accompanied on its tour of the UK by relics of Blessed Jacinta and Francisco, two of the young Portuguese children who saw the apparitions of Our Lady in 1917.

On Saturday 14 October, Bishop Alan Williams sm will take part in a rosary procession (joyful mysteries) from St Alban’s School in Harlow at 1.30pm before crowning the statue of Our Lady of Fatima in the church prior to Mass at 2pm. Veneration of the statue and relics will take place at 3pm before refreshments and a film and talk by members of the World Apostolate of Fatima (WAF) in England and Wales. Exposition of the Blessed Sacrament will take place at 5pm. Benediction will be followed by a vigil Mass at 6pm. A further period of veneration will be followed by the rosary (sorrowful mysteries), led by youth members of the parish.

On Sunday 15 October, members of the Indian, Filipino and African communities will lead the rosary (glorious mysteries) at 10am before Mass at 11am. Veneration of the statue and relics will follow. At 1pm a rosary (luminous mysteries) will be led by the Polish community before Mass in Polish at 1.30pm. After Mass veneration of the relics and statue will take place before sung Divine mercy and hymns to Our Lady complete the visit.

Our Lady of Fatima Church at Harlow will also be open from 9 am – 8 pm on Wednesday 13 October for visitors to pray to Our Lady of Fatima. This, with the weekend visit, is an opportunity to gain the plenary indulgence granted by Pope Francis for the anniversary year which ends on 27 November 2017.

The plenary indulgence of the jubilee is granted:

a) to the faithful who visit the Shrine of Fatima in pilgrimage and devotedly participate in a celebration or prayer in honour of the Virgin Mary, pray the Our Father, recite the symbol of faith (Creed) and invoke Our Lady of Fatima;

b) to the faithful who visit with devotion an image of Our Lady of Fatima solemnly displayed for public veneration in any temple, oratory or adequate place, during the days of the anniversary of the apparitions (the 13th of each month, from May to October 2017), and devotedly participate there in any celebration or prayer in honour of the Virgin Mary, pray the Our Father, recite the symbol of faith (Creed) and invoke Our Lady of Fatima;

c) to the faithful who, due to their age, disease or other serious reason, are impeded of moving, if, repentant of all their sins and having the firm intention of performing, as soon as possible, the three conditions mentioned below, in front of a small image of Our Lady of Fatima, spiritually unite in the days of the apparitions to the jubilee celebrations, offering with trust to God all-merciful through Mary their prayers and pains, or the sacrifices of their own lives.

To gain the indulgence the usual conditions apply i.e. sacramental confession, Eucharistic communion and prayer for the intentions of the Holy Father.