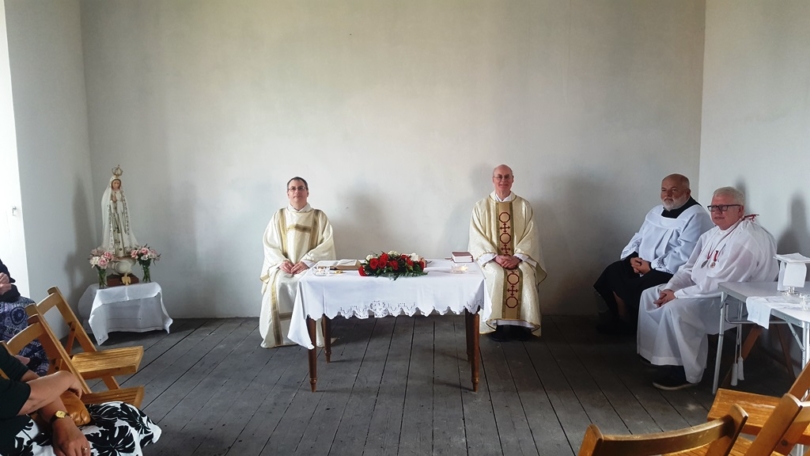 More than 50 people, including Lord Petre, attended an historic Mass in St John’s Abbey Gatehouse in Colchester on Monday 24 June. The date was significant: it was the first time in over 480 years that a Mass had been celebrated on the site on the feast of St John the Baptist. Now all that remains of the great Benedictine abbey, which saw its last abbot executed outside its walls on the order of Henry VIII, is the Gatehouse. 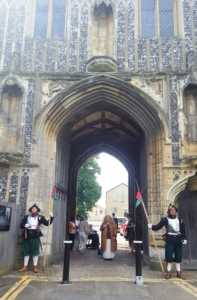 It was a poignant moment for Jennie Guthrie-Stevens, a local historian and main organiser of the event. She and the Colchester Catholic Heritage Group, of which she is part, had previously organised a Mass on the anniversary of Abbot John Beche’s death – but this was a first on the actual feast – a day very special to the monks of five centuries ago.

Mgr Chris Brooks, parish priest of St James the Less and St Helen in nearby Priory Street, was given a guard of honour by the Colchester Town Watch at the Gatehouse to mark the historic occasion.  The Watch regularly walk the walls of the town on the feasts of St John the Baptist and Saints Peter and Paul.

In his homily, Mgr Chris talked about history and drew parallels between St John the Baptist and Abbot John Beche. “The two are connected through martyrdom; and behind the predicament of both was a marriage problem. John was imprisoned because he said Herod could not marry his brother’s wife. Abbot John was executed because he did not adhere to the Act of Supremacy – which derived from Henry VIII’s marriage problem.”

History, he said, can be seen in different ways – political, economic and so on – but ultimately the most important stories individually are to do with salvation, “and how we come to God”. We have to be careful that our history is open and truthful, he added.  A recent outing to Woburn Abbey illustrates the point. “We saw a picture of the Abbot’s Oak and an explanation which said that it was called that because the last abbot of the Cistercian monastery was hanged on it. That’s all it said. There was no sense of history of the place or the whole story – the confiscation of a Cistercian monastery and the hanging of a man of faith.”

“Another oblique reference to the Reformation was to be seen on a display by schoolchildren which said that Henry had confiscated the monastery to pay for a war in France. That was it.”

He continued: “We need to lead reflective lives, reflecting on history and where it might be going. Ultimately all history comes back to salvation. Are we responsive to God’s call where we are and does that guide our decisions? Or are we guided by other considerations – economic or political?”

Referring to the opening prayer of the Mass of St John and his role in raising up a world fit for Jesus, filled with spiritual joys, he added: “We must have an overarching recognition that everything we say, do or think has an impact on our salvation and that of others.”

As he concluded, he said: “Today we pray for Benedictine monasteries in this country, that they may be blessed with vocations and continue to contribute to the life of this country. We pray for ecumenical endeavours – that talking and listening will bring us closer and to the full truth of the Gospel. And we pray for all those who attended Masses, confessions, weddings, baptisms and funerals in this abbey during its lifetime.” 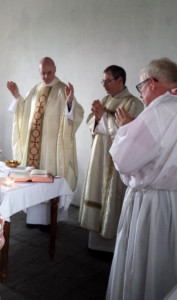 After the service, Mgr Chris, who was assisted by Deacon Adrian Lowe, expressed his surprise about the numbers who braved the spiral staircase to the whitewashed room above, which was adorned only with a statue of Our Lady borrowed from the parish church and some flowers. “I only expected around 20 people,” he said. He also referred to the Reformation and the damage done to churches, monasteries and people during that period. “What was done then makes the destruction wrought by Isis look amateurish – and the ripples are still being felt today.”

Those who were present felt the poignancy of the occasion – and had come from as far away as Hornchurch. Their ages ranged from two to 80-plus.  Said one: “I think those who attended will remember the Mass and the sense of numinous all their lives.”

If you would like to find out more about the Catholic history of Colchester, talks and tours are planned at the Church of St James the Less and St Helen and the Abbey Gatehouse on the English Heritage weekend of 14/15 September.