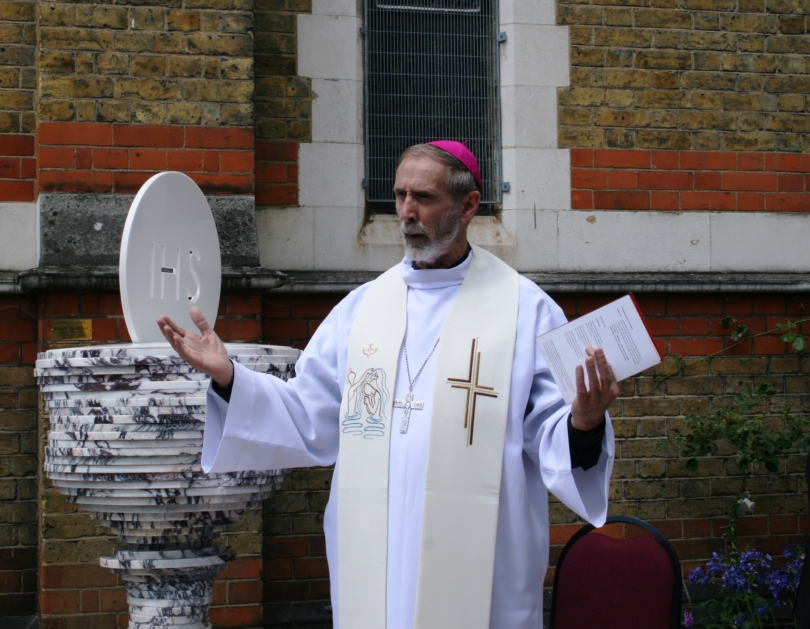 The parish of Saints Peter and Paul in Ilford has an illustrious history. No fewer than 58 men have been ordained to the priesthood and diaconate in its 124-year existence.  To recognise that record, parish priest Fr Andrew Headon has commissioned a giant marble chalice from Tuscany, engraved with the names of all those ordained, in memory of parishioner and benefactor Sonja Roberts. It was unveiled and blessed on the 21 June – the anniversary of her death – by Bishop Alan Williams sm (above). A novena of prayer for vocations took place the following week, ending at the patronal feast on 29 June.

“It was obviously meant to be,” says Fr Andrew (right). “Bishop Alan was unable to come on our feast day as we originally had hoped but the earlier date not only coincided with the anniversary of Sonja’s death but gave us the opportunity to organise the novena, with something special on each of the nine days: guest preachers, talks and so forth.”

The list of those ordained at the parish includes three members of the same family: Monsignor Arthur Barrow and his brothers Michael and Bob, who are both Jesuits. Mgr Arthur is a retired vicar general in the diocese while Fr Michael, at 89, is still in active ministry as a parish priest in Barbados. Fr Bob, 93, lives in Guyana. The three are in regular Facetime contact with each other and their sisters (left with the chalice), Janet, the parish secretary at nearby St Cedd’s, and Mary, a nun with the Society of the Sacred Heart.

Other alumni from the parish include Canon Palmer and Cardinal Heenan, both of whom are commemorated in the area – for example, at The Palmer Catholic Academy and the Cardinal Heenan Centre – Bishop Brian Foley, Bishop of Lancaster, and Mgr Dan Shanahan, a Chancellor of the Brentwood Diocese. Fr Brian McWilliams, who celebrated his jubilee of priesthood several years ago, is another on the list. He is now living at Nazareth House in Southend.

The parish novena which followed the blessing of the chalice included: a holy hour with Vocations Director Fr Graham Smith; Mgr John Armitage, celebrating his 40th anniversary of priesthood this month, preached at the Tuesday evening Mass; on Wednesday morning newly-ordained Fr Gary Dench said one of his first Masses at the Ilford parish; this was followed by a talk from archivist Fr Stewart Foster about some of the names on the marble chalice. “On Saturday the nine days of prayer for vocations concluded with a parish/school fun day and an outdoor Mass at 12.30pm,” says Fr Andrew.

He is delighted with the way the plan came together. “Next year we will celebrate the 125th anniversary of the parish. Many of those ordained come from the time when Saints Peter and Paul was a mother parish. The parishes of St Cedd, St Bede, St Teresa and St John the Baptist all grew from it.” 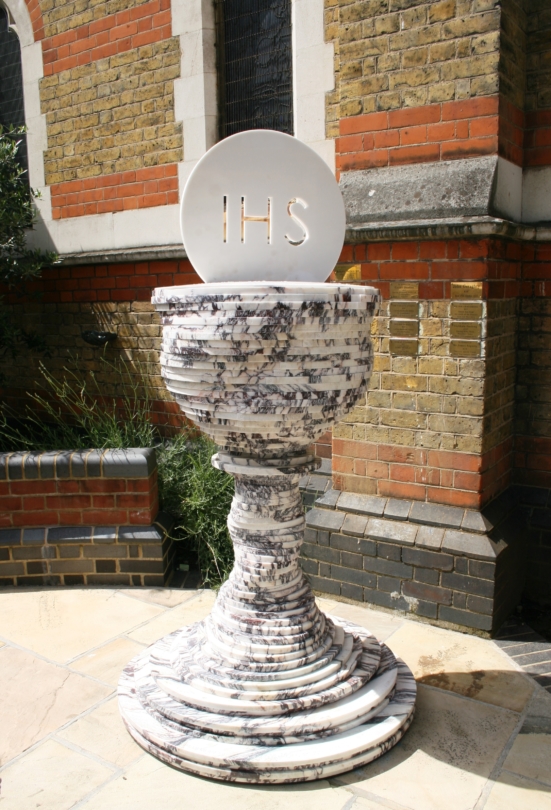 The marble chalice itself is positioned in the church’s prayer garden. Weighing around 800kg, its purple marble comes from a mine near Vagli di Sotto in Tuscany. It was designed and sculpted by Grafagnana Innovazione and consists of 59 ellipses of marble, positioned one on top of another, which create the illusion of movement.  Fifty eight of the ellipses bear the names of those ordained in the parish’s 124-year history. The top one is blank to inspire future vocations. A representation of a stole – another symbol of priesthood – runs down the stem of the chalice.

The service was attended by members of the congregation and invited guests, including family members of those commemorated. Representatives of the four Catholic schools in Ilford – primary schools Ss Peter and Paul and St Aidan, The Palmer Catholic Academy and Ursuline Academy – also attended and took part. Bishop Alan referred to the gospel reading, saying: “Jesus tells us about his deepest identity – he came to serve not to be served. Throughout the gospels he asks us over and over again to speak, act and live as he did. Some he called to be apostles – to act and speak in his name. At Mass, priests say the words of Christ, living and active here and now.”

He referred to the blank top layer of the marble chalice, where another name may be added in the future, and the planned novena. “Pray for vocations to the service of Christ – priests, sisters, lay people who all want to be like Christ. Last Saturday I ordained a deacon; next Saturday I will ordain a priest. Let’s hope the Lord will call more people to his harvest, to work in his vineyard.”

To see the unveiling ceremony, go to https://www.churchservices.tv/ilford/archive/uploads/O5xe7Brd7r 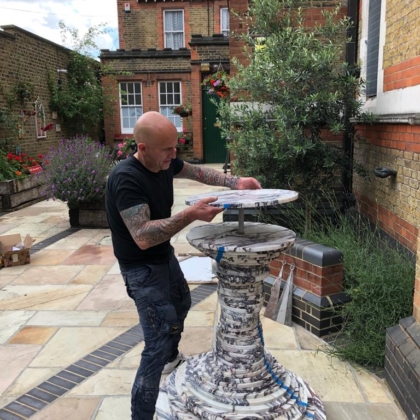 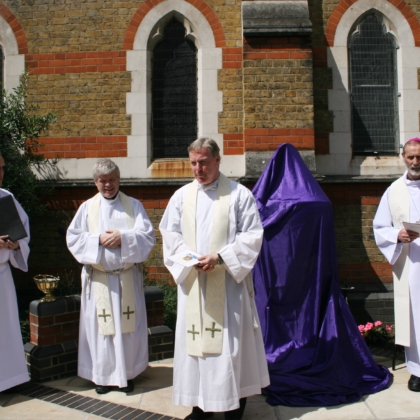 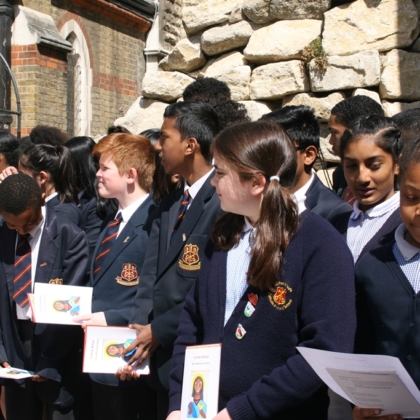 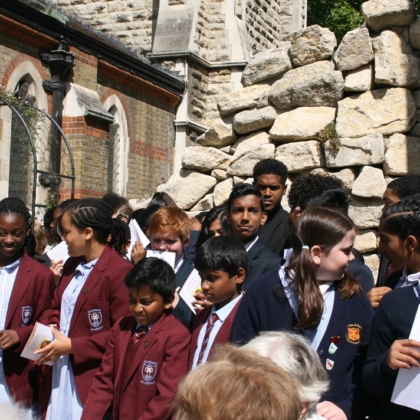 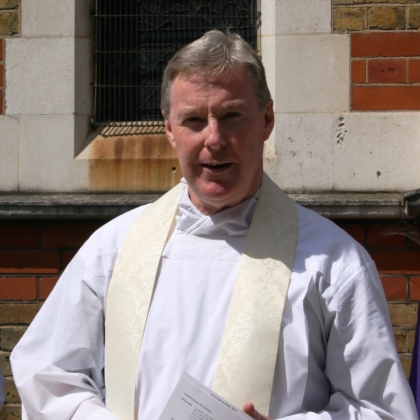 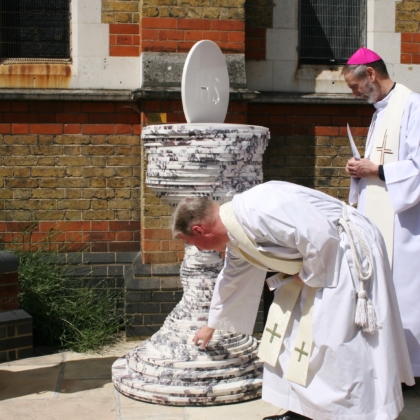 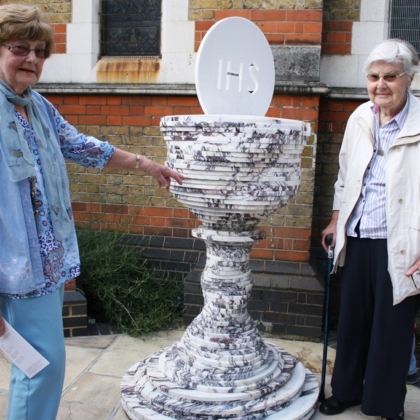 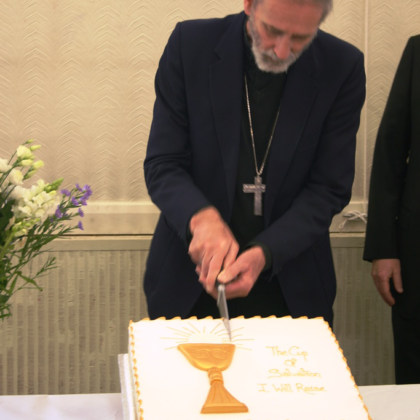