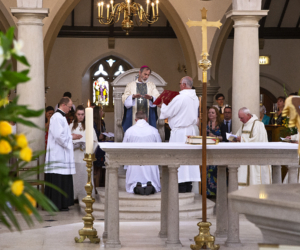 Brentwood Cathedral witnessed a first on 16 June as the parish gained a second deacon from the same family. Paul Conrad, a deacon for nearly 30 years, saw his son Simon ordained to the same estate by Bishop Alan Williams in a joyful ceremony. The embrace between father and son afterwards lasted a long time – and drew a hearty round of applause from the packed congregation. 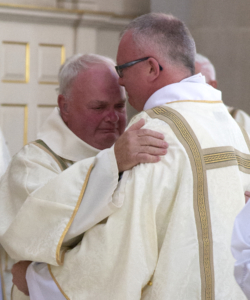 Simon says: “The most beautiful part of the ordination is that straight after you get to greet the other deacons. I always knew it would be a very moving moment for me with my dad. He has been a model deacon, hugely influential for me and for so many in the diocese. I didn’t want to let go!”

For Paul it was equally moving. His pride and emotion were apparent as he approached his son for that embrace. “And the affirmation from the people as they applauded really hit me,” he says.

He was not surprised when his son followed him into the diaconate. “I knew Simon was always keen on ministry – he was an altar boy for years and later worked with the Youth Service at its then headquarters in Chingford.”  Paul himself was ordained some 29 years ago, after gradually discerning his vocation over time. “As an altar server throughout my teens at Chingford, I developed a great love for the liturgy. Later on, after marriage and children (in Brentwood), I became aware of a nagging feeling about the diaconate but it was about 10 years later that I spoke in earnest about it to Fr David Donnelly.”  After formal interviews he began formation at Wonersh alongside Kevin Lyons and Arthur Woods. Ordination followed in 1989 and he became very involved in the parish, interacting with people through baptisms, funerals, weddings and so on. “It was a totally different world from my work in City banking – which I found isolating – and when the opportunity to retire came early, I took it,” he recalls.

Throughout the years since, he says, he has gained enormous fulfilment from his role. “It is wonderful to be able to work in conjunction with the priest and I have experienced great love and support from parishioners and friends – we have laughed together, cried together and shared great joy at baptisms and marriages. The point is that a deacon is with the people, part of the people, one of the people. He is said to be a bridge between the bishop and the marketplace.”

For his part, Simon says the idea had been at the back of his mind for decades. At university he studied theology and met Sarah who would become his wife. A career in education followed. “I felt then that my vocation was to be a teacher in Catholic schools. On a day to day basis I had the joy of sharing the gospel with children.” 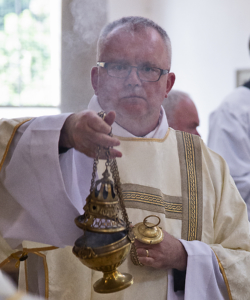 Despite this, a ‘quiet little voice’ continued to speak to him about serving the people of God. “Around five years ago, Fr Martin Boland (Dean of the Cathedral) asked me outright if I had thought of the diaconate. I think he was surprised by my positive response.” Later on, as he proceeded with the vocation, he gained valuable guidance from Fr John Harvey, who oversees the permanent diaconate in the diocese.

Formation followed at Wonersh Seminary, with part-time academic study over a three year period. “It was very different from my theology degree. Although it applied the same skills, it involved studying scripture from a faith perspective, making links between the Old and New Testaments, and how to share the Word with others.” Practical teaching from deacons already in post completed his formation and was very valuable, he says. “Nothing beats doing it for real.”

When the day of ordination arrived, Simon says he felt absolutely at peace. “It felt like everything was coming together. Everyone had put in a lot of work and the parish community had been enormously supportive in the run-up. The liturgy and music were beautiful and the service was full of joy. People are not very familiar with the ordination service and it was amazing seeing everyone drawn into that experience, praying and acclaiming as a community.”

As he lay prostrate on the Cathedral floor, his daughters led the litany of saints. “I felt the whole Cathedral was joined in prayer, with heaven and earth united in support as we asked the saints to pray with us and for us.”

He did not have long to wait for his first act of service – the next day he read the Gospel and preached at all four Sunday Masses in the Cathedral, drawing on his personal experience to illustrate the parable of the mustard seed. 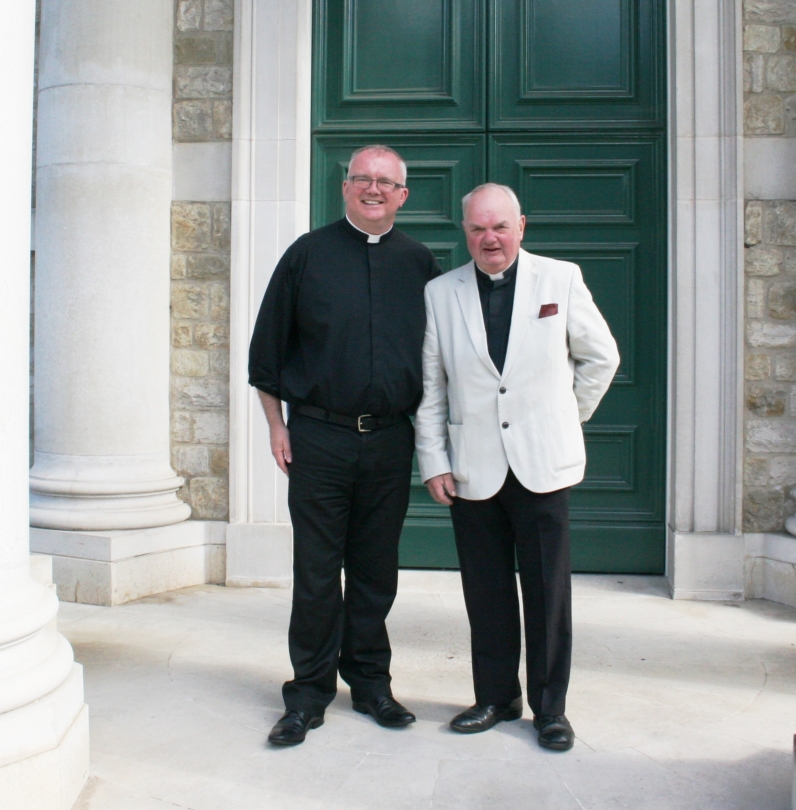 Although a bit of him wonders why he did not seek this path 10 or 20 years ago, Simon says this was the right time for him. “I see a divine hand in that.”  He is aware that he has a big act to emulate. “Although Dad hasn’t given me specific advice, we talk things through all the time. It is implicit – actions speak louder than words. Over the last 30 years I have seen a great model of what it looks like to serve.”

For more pictures go to http://www.cathedral-brentwood.org/blog-2/