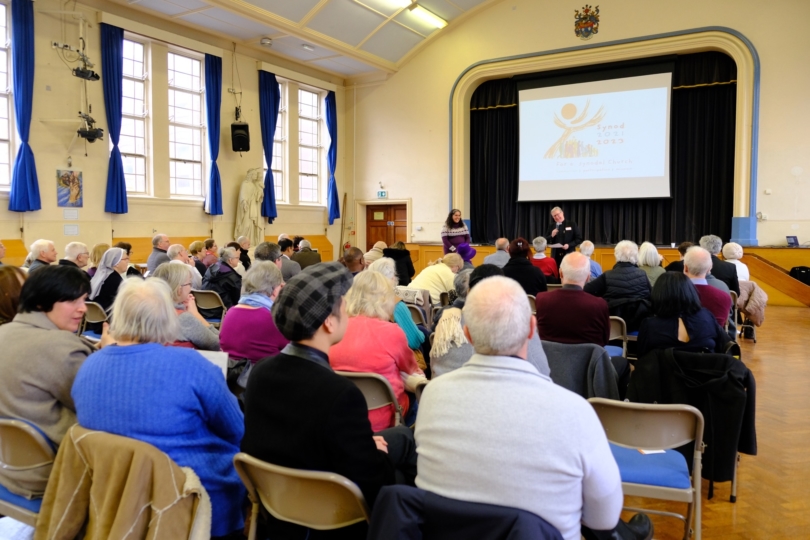 Nearly 100 people attended a meeting at Brentwood Ursuline last month to discuss responses from parish conversations across the Diocese about the way we are journeying together, to listen to one another and comment further as part of the synodal pathway. 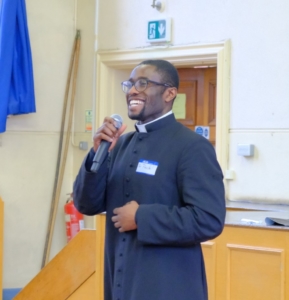 The positivity of the meeting was encapsulated by Fr Paschal who explained ‘Hope’ as ‘Having Only Positive Expectations’, led the audience in a brief rendition of By the Rivers of Babylon and said: “We are all in a strange land but there is much reason for hope because God holds the whole picture. He is so much bigger than every challenge we face and he wants a church that trusts him.”

“We are synodal already,” said Fr Andrew, referring to the Stewards of the Gospel process which has been halted temporarily, as a result of the pandemic. “We have only had five months to carry out this synodal discernment process but this is not about an end point. Whatever we do in these months will continue to bear fruit in the future, that is the important thing.” 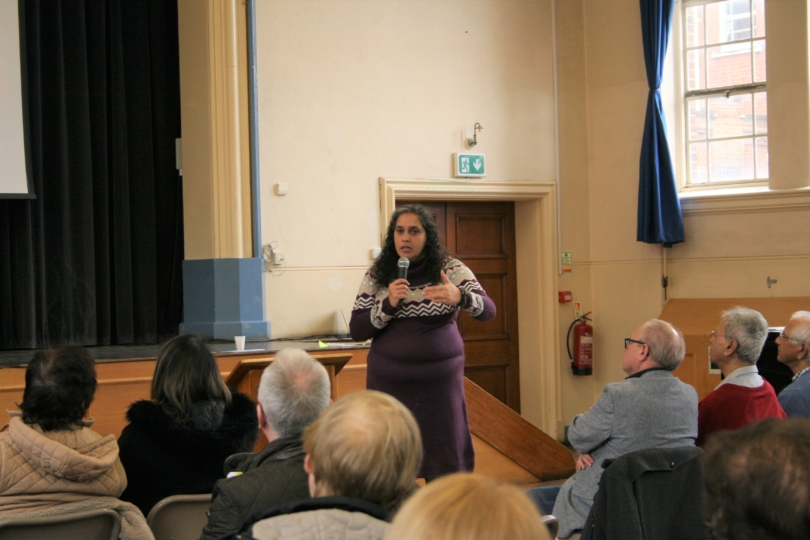 He paid tribute to the amount of work done by the team and in particular Teresa Carvalho (above), in collecting, analysing and synthesising the feedback captured by parishes on the themes of Communion, Participation and Mission.  Teresa likened those themes to three sides of a prism: “Communion involves the atmosphere we are in and our relations with God. Participation is what we do to respond; and Mission is about how we reach out to non-members of our community with the Good News.”  She concluded that all this had to be viewed through the signs of the times. “We are living in a changed world – that’s why Pope Francis has chosen to do this synodal project – because the way we do things may need to change.” 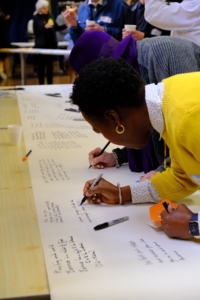 The day’s participants were then asked to help the team to produce their report to the Bishops’ Conference by examining the synthesised statements and collated responses that had come from parishes across the diocese, and commenting on the balance and emphasis. In this, Bishop Alan advised: “The extent that we bring God and discernment into this, will make all the difference.”

Fr Jeff Woolnough, parish priest at Eastwood, recalled wisdom from St Paul, “an expert in conflict management”, for use in any discussions and meetings, participation and mission. “Think before you wade in. Do not use harmful words when talking; use only helpful words that do good to those who hear you. Get rid of all bitterness, passion and anger… be kind and tenderhearted to one another and forgive as the Father does.”

He went on to relate his experience following the death of his friend and local MP Sir David Amess. “David’s death has brought us together in Eastwood. I have spoken to people I would never have spoken to before. I have talked to people from synagogues, mosques, local churches and we have become friends, listening to each other and having dialogue. We need to let our guard down a little bit and open our hearts to a conversation.” 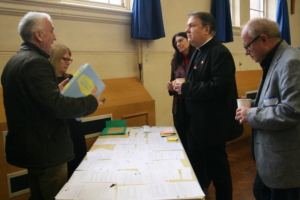 A hubbub of conversation and discussion followed as attendees perused the collated comments and feedback from individuals and parishes laid out in categories on tables around the edge of the hall. Questions and comments from engaging young people, the role of women, allowing priests to be married, clericalism, outreach, liturgy, lapsed Catholics and more were discussed, ranked and reframed enthusiastically. Said one participant: “This has been an amazing, fantastic day.” 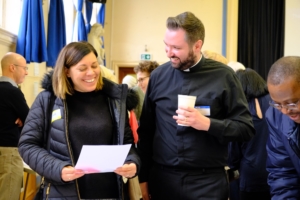 Fr Andrew and Teresa were delighted with the outcome. “It’s been wonderful to meet people in the flesh and have such a wide representation from Essex and East London,” said Teresa. “It has been very encouraging and lots of ideas have been fed into the centre. We are learning as a diocese. The team has been engaged in conversations throughout and some people even went to the video room to make clips.” Anna McCormick, from the Marriage and Family Life Department, talked with many people about re-engaging young people in the Church: “There was a real mix of opinions – so many people have ideas and suggestions about what we can do. In a secular world, we have to offer something that is attractive, that people can’t get elsewhere. We have to think about families rather than just young people.”

Fr Andrew said the results would be published and that he would like to see parish partnerships arrange similar days to get together and discuss the topics at a local level.

Current initiatives in the Diocese which can give encouragement and focus were discussed briefly, including the Faithlift project at the Sion Community, Caritas Diocese of Brentwood and the Stewards of the Gospel process. 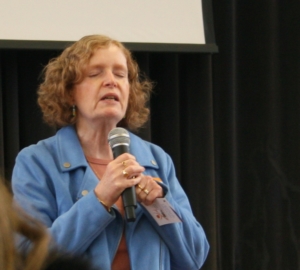 Explaining the Faithlift launch last year, Michelle Moran said: “People were saying that they were living in a wilderness time, so we started to publish short videos every Sunday on our YouTube channel, giving messages of encouragement, working through the virtues and encouraging people to put faith into action. And every two months we host a ‘Faithlift’ day in the Community with the Eucharist, Adoration, Confession and a shared message.”

Siân Thomas, who coordinates Caritas Diocese of Brentwood, spoke about the key role it plays in charitable work in the Diocese and invited attendees to get involved in communicating local initiatives. Director of Development Steve Webb announced that the Diocesan Vision Document and the Stewards process which produced it is to be relaunched after Easter, following the forced hiatus brought about by COVID. “If we are to be truly synodal on our journey together, we already have the structure to do it,” he added, quoting from the Vision Document: “Be bold; reach high; we need to be radical… and continually talk to one another.” 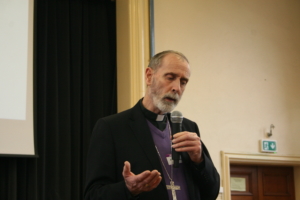 Bishop Alan prayed for Ukraine in closing the meeting, telling people that to discern and live in this “rather awful world”, we must stay connected to Christ. He asked people to “talk, speak, think and act as Christ would”.

“We are a people of hope, of faith in God, in this world, in each other. That is our vocation. You are never more Christ-like than when you love despite all the cares that assail you,” he said.