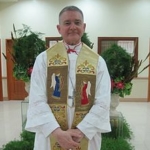 Cardinal Nichols, Archbishop of Westminster and president of the Bishops’ Conference of England and Wales has offered Archbishop Adams his heartfelt congratulations on the appointment. He extended the warmest of welcomes to the incoming apostolic nuncio and gave him an assurance of prayers as he takes up his new office.