Six months since its launch, the new Rough Sleepers Hub in Canning Town reports on its work to support people off of the streets of Newham.

In the London Borough of Newham, a record number of people do not have a place to call home. Annual figures released last week by Combined Homelessness and Information Network (CHAIN), showed that over the past year, 615 people were seen sleeping rough in the borough. This means we have the third highest concentration of rough sleepers.

That’s why the Rough Sleepers Hub, launched at Newham homeless charity Caritas Anchor House in December 2018, is so important. It was opened as part of central government’s Rough Sleeping Strategy and the London Borough of Newham’s commitment to tackling homelessness in the borough.

The hub workers provide support, advice and interventions, supporting residents in their journeys away from rough sleeping and into accommodation. This involves processing referrals from street outreach teams, and working closely with the local authority, housing providers and private landlords, to identify and improve pathways out of rough sleeping.

Since its launch, the hub has housed 27 rough sleepers, 82% of whom have significant support needs in addition to homelessness. The most common cause of their homelessness was the loss of a private tenancy (33%), a trend seen across the country, followed by family and friends no longer able to accommodate them (15%). 45% of those who have moved on have moved into privately rented accommodation, and 55% into supported and sheltered housing.

The hub has seen many successes already, and the number of bed spaces has been doubled following a successful pilot. It now accepts referrals from services including Thames Reach, St Mungo’s, Single Homeless Project, Change Grow Live and NewWay, enabling the charity to support more people off the streets and into homes.

Amanda Dubarry, Chief Executive of Caritas Anchor House, said: “Rough sleeping has risen every year since 2010, and as a charity, we are proud to have adapted our service to ensure people can access the support they so desperately need. Many of those we’ve helped, and certainly those who are still sleeping rough in the borough, are vulnerable and require specialised support to tackle these issues and turn their lives around.”

The hub is funded until the end of March 2020, however it’s hoped that it will become a continued part of the charity’s service. The provision is in addition to Caritas Anchor House’s core service, which provides longer-term accommodation to over 200 homeless people each year, as well as support to improve health and wellbeing, access to educational and employment opportunities, and support to secure and sustain independent living. 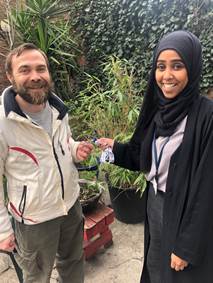 Iulian receiving the keys to his new home from hub worker, Zainab

“I was living in a house-share, sharing a room with three people I didn’t know. It was part of the deal with my job and my landlord, who was also my employer, said he would deduct the rent directly from my wages.

“But my wages never came. I worked unpaid for six weeks and kept asking my employer when I would receive the money, but he told me to leave.

“With nowhere to go, I had no choice but to sleep on the streets. I slept mainly in well-lit passages, and where I could, public places with CCTV. I thought I was less likely to be attacked if passers-by could see me.

“When I moved into Caritas Anchor House I was so relieved. I finally had a stable roof over my head, and could stay long enough to get my life back on track. Once I got here, I knew I wouldn’t ever go back to the street.

“The best thing about Caritas Anchor House is knowing that you can get all the support you need, and how nicely you are treated. Zainab [my support worker] has helped me so much, including helping me to re-apply for my ID that was lost when I was homeless.

“She encouraged me to apply for a job at a popular restaurant chain, and helped me to prepare for the interview. I was lucky to be accepted for a trial shift, which went well, and was offered the job.

Caritas Anchor House is seeking support to provide Move-In and Move-On Packs with essentials such as toiletries, kitchenware and a bed when residents move into their new homes. To make a donation, please visit www.caritasanchorhouse.org.uk

Caritas Anchor House is homeless charity providing accommodation and support to single homeless adults in the London Borough of Newham and is currently the largest service provider for them in the borough. The charity’s mission is to ensure that those who walk through their doors grow in confidence and move towards leading independent, self-fulfilling lives by providing education, guidance and personal rehabilitation.

Newham successfully secured £1.6 million of the £30 million made available by the Ministry of Housing Communities and Local Government (MHCLG) Rough Sleeping Initiative (RSI) grant to tackle the rough sleeping crisis in the borough. The funding is for two financial years: Year 1 (2017/18) – £519k, Year 2 (2018/19) – £854k. The Mayor of Newham, Rokhsana Fiaz OBE, has committed to tackle homelessness as one of her highest priorities for the borough.