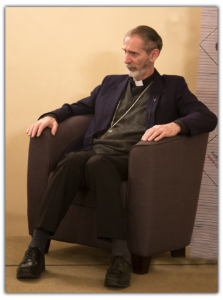 On 27 March Bishop Alan Williams spent a day in total silence – for SiLent. You can listen here to an interview with BBC Essex which took place earlier in the week – and you can still sponsor him. The money raised will go to charity Million Minutes, which funds projects working with young people, such as For Jimmy and Basildon parish’s school holiday project, Field of Dreams.

At the SiLent launch in Brentwood Cathedral at the beginning of Lent, Million Minutes’ Dan Hale asked the young people who attended to consider giving up speaking – and more significantly perhaps – social media and mobile phone apps for a whole day or a number of hours over Lent, perhaps collectively in a school assembly. He said: “This is about using silence in a really positive way.  In this busy world, there is no space to reconnect to who you are. Silence is the gateway to the soul; the way we communicate to God.”

Since then many schools and young people have done just that. In his interview, Bishop Alan reiterated Dan’s call, saying that he hoped more young people across the diocese would imitate his SiLent experience and spend some time away from the noise and communication of everyday life and its social media.