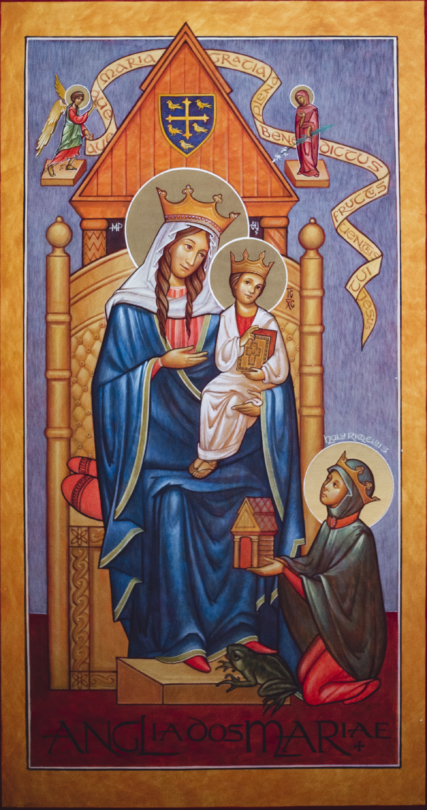 On Wednesday 12 February 2020 Pope Francis, at the request of Cardinal Vincent Nichols, blessed a painting of Our Lady of Walsingham, from a shrine dedicated to Mary, the Mother of God, in Norfolk. The painting, by Amanda de Pulford, will return to Walsingham for the rededication of England as Mary’s Dowry on 29 March 2020.

After the rededication the Dowry Painting will begin a journey to every Catholic parish in England. Walsingham Shrine, founded almost 1,000 years ago, is one of the oldest shrines dedicated to Mary. In pre-reformation times, it ranked with Jerusalem, Rome and Compostela as the most visited sites in Christendom, until it was destroyed in the 16th Century. Medieval pilgrim routes to Walsingham exist from Ely, Norwich and Kings Lynn, where pilgrims from Europe would disembark before travelling the 30 miles to Walsingham on foot. With the resurgence of pilgrimage in Britain, it is expected that many people will want to walk to Walsingham this year.

The first documented dedication of England to Our Lady was made by King Richard II in Westminster Abbey in 1381 as he sought her protection in the face of great political turmoil. It was the first formal occasion when England was known as ‘Mary’s Dowry’, although the title is believed to have an earlier origin. ‘Mary’s Dowry’ means that England was ‘set aside’ as a gift for Mary. This event is commemorated in the Wilton Diptych which is displayed in the National Gallery.

On Sunday 29 March 2020, a rededication will take place throughout the country, in cathedrals, churches, and other venues. This rededication is both a personal promise of the people of the country, and a renewal of the entrustment vows made by King Richard II in 1381. A map of places which have offered to host the rededication on 29 March can be found in the website www.behold2020.com. 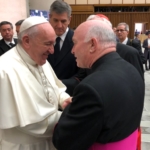 The Rector of The Catholic National Shrine in Walsingham, Mgr. John Armitage said: “It was a great joy to be with Pope Francis and Cardinal Nichols in Rome for the blessing of the new Dowry Painting. The painting will be commissioned in Walsingham on the day of the rededication by Cardinal Michael Fitzgerald on the site of the ancient Holy House. It will then leave to start a visit to every Parish in the country as a permanent reminder of the devotion of the people of England to Our Blessed Lady expressed so beautifully in the Dowry tradition that we will celebrate on the 29th March 2020. On this day we shall surely take Our Lady’s message to heart to ‘Share my Joy in the Annunciation’.”