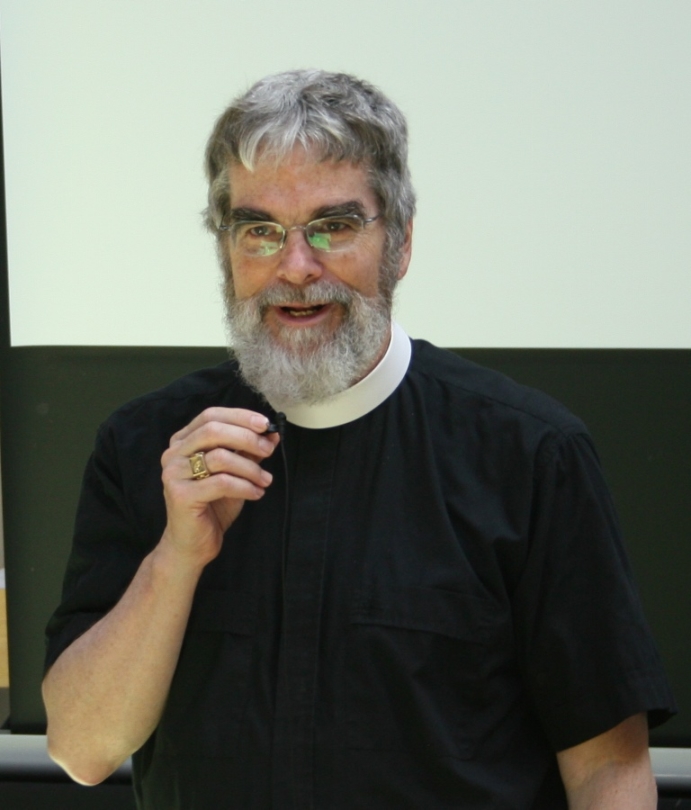 Brother Guy Consolmagno SJ, Director of the Vatican Observatory, held 200 people spellbound as he talked about ‘God and the Cosmos’ at a Gidea Park parish in June.  Demand for the study day was such that it had to be moved into the Church of the Eternal High King instead of the parish hall – and the audience was not disappointed. In a wide-ranging session Brother Guy addressed a plethora of audience questions, interspersing philosophy and science with humorous anecdotes, and quotes from G K Chesterton and others.

Brother Guy earned his PhD in Planetary Science at the University of Arizona’s Lunar and Planetary Laboratory in 1978. In 1989 he entered the Society of Jesus (Jesuits) and took vows as a brother in 1991. Two years later he was assigned as an astronomer to the Vatican Observatory, where he served as curator of the Vatican meteorite collection. In 2014 he was awarded the Carl Sagan Medal for public outreach and in 2015 Pope Francis made him Director of the Vatican Observatory.

His research explores connections between meteorites, asteroids, and the evolution of small solar system bodies, observing Kuiper Belt comets with the Vatican’s 1.8 meter telescope in Arizona, and applying his measure of meteorite physical properties to understanding asteroid origins and structure. Along with more than 200 scientific publications, he is the author of a number of popular books including Turn Left at Orion (with Dan Davis), and most recently Would You Baptize an Extraterrestial? (with Father Paul Mueller, SJ).

In the first half of the Gidea Park day, Br Guy gave a brief resume of the development of the Observatory, which moved its telescopes from Rome to the Arizona desert as a result of light pollution (ironically, Br Guy was unable to show his slides due to excessive sunlight in the church). He also talked about his own journey to planetary science via history – and how he became a Jesuit when he was about 40.

As a young man, he questioned his choices though. “Every night I’d lie in bed and wonder why am I doing astronomy when people are starving in the world?”

As a result he joined the US Peace Corps and went to Kenya to teach in a high school. After two months he was pulled out and sent to teach astronomy to graduate students at University of Nairobi. “People need to live in a technologically developed society,” he says. “Astronomy is something that feeds our souls – one of the things that makes us more than well-fed cows – along with music, dance, literature, prayer. That’s why we do astronomy even though people are starving in the world.”

He said that everyone carries around a ‘cosmos’ in their head – a scheme for interpreting the world. “It can help us, but it can also hinder us by limiting our ideas,” he added. To do science takes a very specific sort of mindset, he continued, and it is impossible to do it without making assumptions.

“These assumptions are religious assumptions (although not every religion believes in them). You have to believe that the universe exists; and we assume that the physical universe operates according to laws.”

He went on to say that God is outside nature; he creates nature and gives the universe its meaning. “Wittgenstein said that there’s no point to a chair without me to sit on it. Likewise, without God, there would be no point to the universe.”

He pointed out that society and individual families have to believe that astronomy (or science more generally) is worthwhile. ”It doesn’t happen unless you are in a culture that says that doing science just for its own sake is a good thing.” He contrasted the difficulties in getting investment in scientific research proposals at NASA with the culture at the Vatican Observatory.

“When I joined the Observatory, the then Director merely said: ‘Do good science’. There were no proposals to be made, no deadlines, tenure etc.”

And doing that science, he says, is an act of worship. “Why do people do things? – for power, money, sex. Astronomy doesn’t provide any of these. We do it because we get joy from doing it. That burst of joy when you find logic in the universe is finding God in the universe.”

“We grow up knowing God as father…we believe because we have experienced the love of God…we experience this God of love, who loves us so incredibly personally and then, as we grow up, we discover that’s the same God who built the supernova, that’s the same God who built the stars out there. Because I believe in God, I can see God everywhere in the universe. If I didn’t believe in God, I wouldn’t be able to see that.” 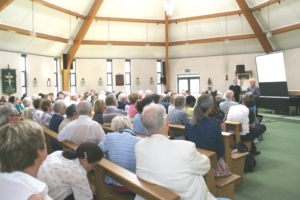 After lunch, he answered questions posed by the audience during the break, beginning by pointing out that the opposite of faith is certainty. “A scientist says, ‘I think this is going on, let me check it out’. I think it is worth checking out whether there is life elsewhere in the universe, for example.” He went on to address questions on terrorism (an act of evil chosen by a human being through stubbornness or revenge), natural disasters (sadly, everyone will die at some time) and care for the earth (it is essential to care for it and each other and be as good as we can be).

“If you believe in God the creator, you will see everywhere evidence of his loving presence. The reason I believe in God is because I have experienced the love of God through family and so on.”

He pointed out that scientists say: ‘Maybe my theory is wrong.’ “Knowledge is like an island: the more you know, the bigger the island; and the shoreline is the border between what you know and what you don’t. Goodness is the same, perhaps?”

He said the Bible cannot be read literally because there are no words adequate to describe God. “Genesis is not trying to say anything about the creation of the earth – it is a book about God. Genesis I and II do not match up but, with other books like Maccabees, there is a common story. God did it, God wanted it to happen. We are not here by accident. That is the important bit, the lesson that stays true. As our understanding changes, biology books become obsolete in a way that Shakespeare does not. In the same way, Scripture studies God and there is far too much important stuff in Genesis to jettison it.”

“The Church doesn’t tell you what to believe when it comes to science. Religion and science both have the right and correct autonomy to look for the truth – science can preserve religion from superstition and religion can preserve science from false absolutes.”

He said it is important in cosmology to interact with people who will challenge your assumptions. “You can’t live in a bubble but must keep checking your theories against experimental evidence, so that you are experimentally in touch with the things you are theorising about. That works with religion too – you check your data through prayer, being quiet and letting God challenge you.” 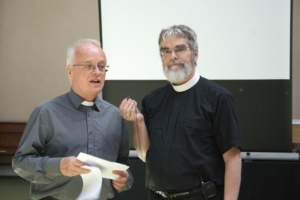 He concluded: “One of the laws of the universe is that parts of it work by chance – which does leave room for free will and divine coincidences.  The goal is not to come up with answers but to understand the question set. God is not a problem to be solved but a relationship to ponder, to live with and enjoy. Sometimes it drives you nuts because you don’t get it. But the best relationships are the ones where we argue, then kiss and make up.”

Fr Adrian Graffy (above), who organised the day, thanked Br Guy for his talk on behalf of all present.

Dr Monica Tobon, who attended the session, said: “It was a most enjoyable and inspiring day.” She has kindly noted some more of Br Guy’s answers for those interested:

A postscript from Monica Tobon

Br Guy raised the question of when Western science began, and suggested Aristotle. But while Aristotle was certainly the most important early influence on its development, its beginnings go back to the sixth century BC and the city of Miletus on the coast of Asia Minor, where natural philosophy came into being through people starting to think about the world in a new way. Instead of supposing it to be ruled by the gods according to caprice, they intuited that it is an ordered system governed by internal laws and therefore subject to investigation and rational understanding. That is, they intuited that the world is a cosmos.

The word kosmos derives from the verb kosmeō, the primary meaning of which is ‘to order’ or ‘to arrange’ (it’s used by Homer in relation to the marshalling of troops). But another meaning of kosmeō is ‘to adorn’ – it gives us our word ‘cosmetic’ – and so the concept of the cosmos includes an aesthetic dimension. These reflections lead us in turn to the concept of logos. Cognate with the verb legō, ‘to say’ or ‘to speak’, the root meanings of logos relate to speech, inquiry, and explanation. By extension logos came to refer also to the human capacity for speaking, inquiring and explaining. It is because we possess logos that we can engage with the world as a cosmos. Together, the concepts of cosmos and logos articulate the intuition that the world is fundamentally rational, intelligible and beautiful.

Monica Tobon holds a BA in Philosophy and an MA and PhD in Classics, all from University College London.