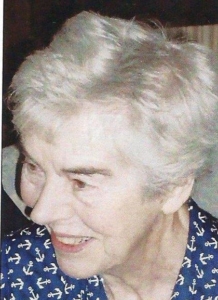 Miss Jane Neely was Archivist of the Diocese of Brentwood from 1993 to 2003. A native of Blackheath in South East London, she was born on 18 December 1927. Her years in secondary school coincided with the Second World War and her family was obliged to move house several times on account of the bombing. In 1946 she began her studies in history at Bedford College, University of London, graduating as a Bachelor of Arts in 1949.

Her professional career was spent in teaching, although Jane belonged to an era of educators who were decidedly schoolmistresses rather than schoolteachers. She taught at four schools, the longest being for more than thirty years at the Brentwood Ursuline Convent High School. Here she inspired generations of pupils in the study of history and was always very proud whenever one of ‘her girls’ went on to university to read that subject.

After her retirement from teaching Jane was asked by Bishop Thomas McMahon to take over the position of Diocesan Archivist from Sister Mary Peter Davies, a Canoness of the Holy Sepulchre from New Hall). Throughout the ten years in which she held the position of Diocesan Archivist, Jane was very meticulous in her approach to her work and always sought to assist enquirers and researchers despite the somewhat limited resources and accommodation enjoyed by the Brentwood Diocesan Archives in those days.

In 1998 she hosted the Annual Meeting of the Association of Diocesan Archivists at Brentwood. Jane retired as Diocesan Archivist in 2003 and died on 11 May 2018 aged 90 after a long illness. For many years she was a parishioner (and indeed a generous benefactor) of St John the Evangelist & St Erconwald, Ingatestone, and it was here on 13 June that her Requiem Mass was celebrated by the Parish Priest, Father Anthony Cho, assisted by Jane’s successor as Diocesan Archivist, Father Stewart Foster. Burial took place in the Catholic section of Fryerning Cemetery. May she rest in peace.