All Saints, Dagenham has been awarded the accolade of ‘School of the Year 2018’ by Citizens UK TELCO – The East London Community Organisation. The award comes after a year of hard campaigning by its school council to improve bus services in the local area. 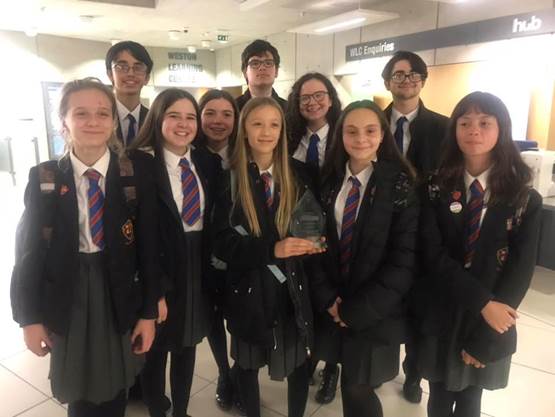 Quickly spreading beyond the assembly hall, the council took the concerns of pupils and staff to the streets in a protest that won the support of both people at bus stops and those driving by. The young campaigners also won the support of members of the local council and MP Jon Cruddas, as well as Bishop Peter Hill of Barking. Momentum developed with the Barking and Dagenham Post covering their work, as they highlighted a wait of 45 minutes for pupils going home at Becontree Heath. This brought Transport for London (TFL) to the negotiating table, agreeing to review all local services.

The school council had a number of requests for TFL: that traffic lights give more time for people to cross, that bus stops have countdown timers, that schedules be tuned in to when the school day ends and, if possible, that a dedicated bus be provided to swiftly take pupils off the streets and on their way home. Everyone in the local area would benefit from these changes, they said. 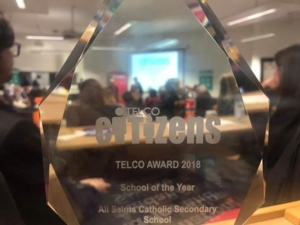 The school council subsequently received the ‘School of the Year 2018’ award for their efforts. Speaking after the TELCO awards ceremony, assistant headteacher Mr Pauro said: “It was a very proud moment to see their action have an impact and show people that things can be changed with a concerted effort. Rosie and Francisc collected the trophy on behalf of some of our most brilliant and sincere peers and are fantastic ambassadors for their school and local community.”  The event, held at UEL Campus in Stratford, marks the beginning of a new stage in their campaign, not the end,  he added.