This Sunday 9th July is Sea Sunday – a day to remember and pray for seafarers and the work of Apostleship of the Sea. On Sea Sunday Catholic Churches around the UK take up a second collection with all funds raised going to the Apostleship of the Sea to support its work. It is a day of remembrance, prayer and celebration, and an opportunity to think about and thank those seafarers who work tirelessly throughout the year bringing us goods we often take for granted. Our Diocese has a direct connection with seafarers at ports like Harwich.

The charity has received the following message from the Vatican for Sea Sunday: 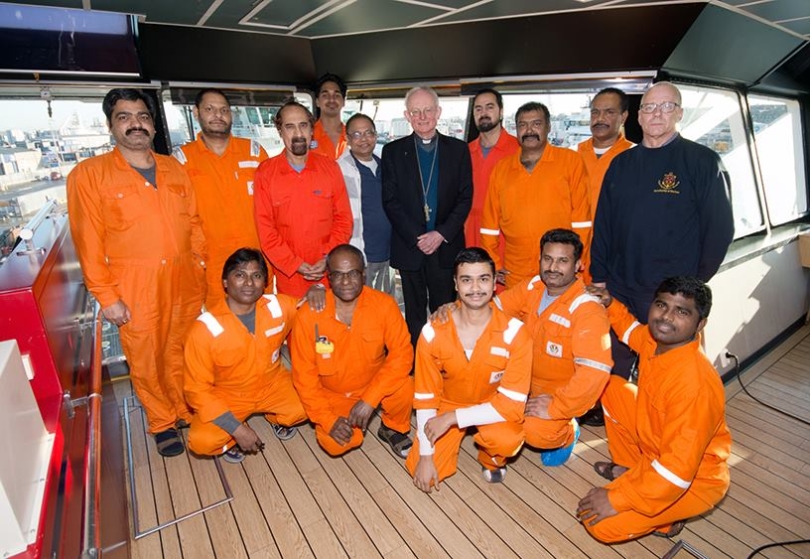 Dear chaplains, volunteers, friends and supporters of the Apostleship of the Sea,

In our daily lives, we are surrounded by and use many objects and products that at some stage of their journey towards us have being transported on vessels. It is difficult for us to imagine behind these objects the faces of the many seafarers who have secured a smooth sailing for the vessel to deliver safely these commodities in the port.

On Sea Sunday we are invited to recognize and express our gratitude to this force of more than 1.5 million seafarers, (the majority of them coming from developing countries), who with their hard work and sacrifices are making our life more comfortable by transporting, between nations and across the seven seas, almost 90 per cent of the goods.

Though their contribution is essential to the global world economy, many are challenges experienced by these people and many are the difficulties affecting their life and dignity.

Here, I would like to recall some:
In spite of the great progress in technology, that has improved communication between seafarers and their loved ones, the long months away from the family are still a huge sacrifice that often reflects negatively on the family life. Mothers are left alone, forced to play multiple role with children growing with an absent father. It is important that in our pastoral ministry, we pay special attention to the families of seafarers by initiating and supporting the creation of seafarer’s wives groups to provide mutual care and assistance.

The use of social media would allow the crew to be connected with many people around the world, but disconnected and isolated from each other on board because everyone is isolated in the virtual world in which is seeking refugee during free moments. Our function especially during visits on board is to try to create a “human connection” and strengthen the “human communication” among crew members to prevent loneliness, isolation and depression that could lead to suicide which, according to a recent UK P&I Club research, is the top cause of seafarers’ death.

Because of the increase of the threat of terrorism, new security measures are further restricting in some ports the going ashore of seafarers and sometimes even the access to the vessel on the part of welfare visitors. Notwithstanding that we understand the need of making the ports “a secure place” for the people and the goods, on the other hand we must make sure that no one will be discriminated and prevented to go ashore because of nationality, race or religion and advocate for the fundamental right of the crews to “have access to shore-based facilities and services to secure their health and well-being” (MLC 2006, Title 4, Regulation 4,4).

In spite of the adoption and entry into force in August 2013 of the MLC 2006, that establishes the minimum international requirements of the human and labour right of seafarers, too many are still the cases of crews cheated out of their salary, exploited and abused on their work, unjustly criminalized for maritime accidents and abandoned in foreign ports.

While it is our duty to provide all the necessary assistance and support to the crews which are experiencing hardship and difficulties, on the other hand we would like to call on all the maritime authorities to be more vigilant and attentive in intervening to prevent abuses and redress any wrongdoing.

Even though the treat of piracy around the maritime routes has decreased, compared with few years ago, the danger of arms attacks and hijackings are still very high in some geographical areas. We would like to invite the maritime community not to let down the guard and to implement all the necessary measures that will guarantee the safety and the protection not only of the cargo but most of all, of the crew.

Finally, I would like to focus our concerns on fishers and fisheries who will be the focus of the XXIV World Congress which will be held in Kaohsiung – Taiwan this coming October.

Similarly to seafarers fishers spend long time at sea, often sail on fishing vessels that are not seaworthy, their profession is considered one of the most dangerous in the world but they are entitled to lesser wages and benefits than those enjoyed by the seafarers. The fishing sector is plagued with cases of human trafficking and forced labour, and Illegal, Unreported and Unregulated (IUU) fishing.

During the Congress, with the assistance of qualified speakers, we will increase our awareness and attention to these particular issues; we will strengthen our network with the objective to increase cooperation between the Apostleship of the Sea of the different nations; we will share resources and best practices to develop specific skills, particularly in the fisheries sector.

I renew my invitation that this Congress be attended not only by the experts, but by the largest number of chaplains and volunteers, because fisheries and fishers are a concern of the Apostleship of the Sea and not just only of those who are personally involved.

In concluding, let us ask Mary, Star of the Sea, to sustain our service and dedication to seafarers, fishers and their families and to protect all the people of the sea until they reach the “safe port” of heaven.

Listen to a seafarer speak about his life at sea and what AoS’ support means to him.