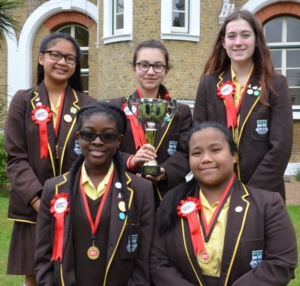 Members of the debating team

A team of students from St Angela’s Ursuline achieved a notable success this week when they won the Debate Mate Cup National Final.

Competing alongside 6,000 students from 240 schools from London, the West Midlands, Manchester, Nottingham, Bristol, Liverpool and Scotland, the St Angela’s debate team took part in several qualifying rounds throughout the year. They took home six gold medals along the way and eventually won the National Debate Mate Cup Final, making them the top debating team in the UK.

“The day was filled with anticipation, stress and passion as we had to debate four different challenging motions, three of which were ‘short-prep motions’ which means we had no previous knowledge of the topics we would be debating.” Diana, Year 10

The students debated the following motions:

After successfully winning all three debates, St Angela’s moved on to the final debate where they proposed the motion: “This house believes: social media has done more harm than good for young people growing up in society today.”

“We were held in suspense for what seemed like forever, as the judges made their decision, but then we were crowned National Debate Mate Champions! ”  Diana, Year 10

“We really enjoyed ourselves and are very grateful for the opportunity to take part in the Debate Mate competition, to showcase the skills that we have gained through our three year debating journey!” Adelaide, Year 10