On 15 June Des Connors was ordained a permanent deacon by Bishop Alan Williams at St Therese of Lisieux, Stansted Mountfitchet. The ordination was the culmination of a vocation sensed many years ago. “When I was growing up in the East End, I wanted to be a priest,” says Des. “It didn’t happen but it has always been there in my mind.”

At 18 he even went on a vocations weekend but his mother suggested he saw bit of the world first. “I took her advice and life took over – I did various jobs and then became a police officer in the Met, rising to superintendent.”

Four of five years ago, someone suggested the diaconate to him and he decided to apply. “I was interviewed by Canon Harvey and began my three years’ training at St John’s, Wonersh. That period has gone by in a whirl. It has been a long journey – but it is something that has never really left me.” He does not regret his mother’s advice so long ago, however. “I have a wonderful wife, Jane, and daughter, Laura – if I had become a priest, that would not have happened. And being a policeman, being a lay person is a vocation too.”

His ordination Mass was very special because it took place in his own parish, he says, and because Mgr Jim Curry from Westminster, a friend from school, was concelebrating the Mass.  The ordination was attended by eight deacons and nine priests. And the St John’s cohort came too. Afterwards Des was photographed with his family and his fellow deacons-in-training (above). “It was overwhelming: a fantastic day,” he says.

“I felt that this is what I am meant to be doing – and that has driven my decision to take early retirement later this year after 27 years in the Met, so that I can do it properly.”

And he has hit the ground running. “On the Monday following my ordination I spoke to two families about baptism and had a call from a family regarding a still birth. On Sunday I did my first baptism with over 100 people attending. It was nerve-racking but a lovely day.”

Pictures from the ordination 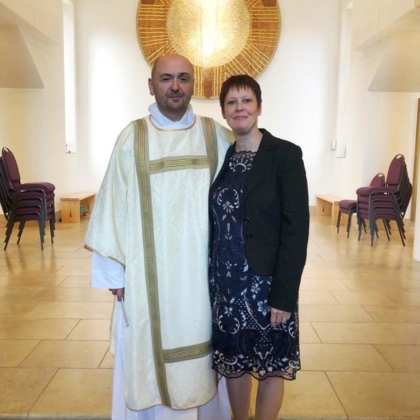 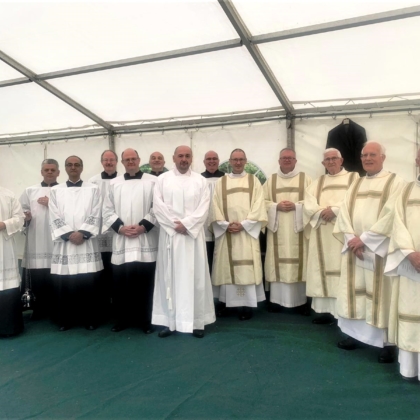