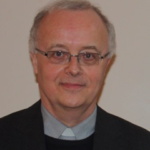 Fr Adrian began by explaining that the Nicene Creed, which we use at Mass, is the product of two councils of the church held in the fourth century, Nicea and Constantinople. His presentation was guided by the words of St Cyril of Jerusalem, who said that the statements in the Creed came not from ‘human opinions’ but from the ‘whole of Scripture’, which provides a ‘complete teaching of the faith’. During the talks we considered how each phrase of the Creed reflected passages in Scripture.

It was interesting to note that the original version of the Creed, composed in Greek, opens with the word pisteuomen, ‘we believe’. The later Latin version changes this to credo, ‘I believe’.

The Creed has a Trinitarian structure: it considers Father, Son and Holy Spirit. Most attention goes to the Son, for the fundamental purpose of the Council of Nicea was to combat the ideas of Arius who denied the divinity of Christ. ‘There was a time,’ taught Arius, ‘when the Son was not.’ The Son was therefore not eternal, but created. To counter this opinion the Creed affirms that the Son is ‘of one being’ (homoousios) with the Father, and therefore with the Father from all eternity.

The climax of the Creed comes when the one who is co-eternal with the Father enters our world and our life. The astonishing statement that he ‘became man’ lies at the heart of our Creed and of our faith, and these words are said with particular devotion.

It was interesting to note that the version of the Creed completed at Nicea ended with the words ‘We believe in the Holy Spirit’. It was the council of Constantinople that further elaborated the ‘person’ of the Spirit, affirming the Spirit’s divinity with the titles ‘Lord’ and ‘giver of life’. For Constantinople the Spirit ‘proceeds from the Father’. The addition of the phrase ‘and from the Son’, the famous Filioque, came later, and was hotly contested by the Eastern Church. It was one element which fuelled the eleventh century schism between East and West.

Considering the final statements of the Creed we explored pointers in Scripture to the four ‘marks’ of the Church, and references to baptism, the resurrection of the dead and eternal life.

A question from a member of the audience led us to take a look at the most awkward statement in the Apostles’ Creed, which is sometimes used at Mass in the place of the Nicene-Constantinopolitan version. This is the phrase ‘he descended into hell’. ‘Hell’ is not the fiery place of punishment but the place of death, the Hebrew sheol.  This is an allusion to the Holy Saturday moment when we consider Christ visiting the lowest parts of the world, going ‘down’ to the dead in order to liberate from death those who lived in earlier times. The resurrection is not simply for the contemporaries of Christ and for those of later times, but reaches back to the beginning of time.

Our journey through the Creed ended with a look at John Henry Newman’s hymn Firmly I believe and truly, which demonstrates how faith leads on to love. We concluded by listening to the beautiful singing of this hymn by the dying Gerontius in the first part of Elgar’s oratorio The Dream of Gerontius.

At the next Gidea Park faith evening on Wednesday 7 March at 7pm, Mgr David Manson will prepare listeners for Holy Week with an exploration of the ceremonies of the Easter Triduum.