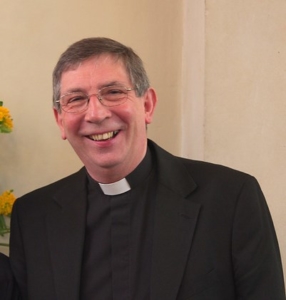 On Wednesday 7 March an audience of around 70 people gathered to hear liturgy specialist Mgr David Manson talk about ‘Preparing for Holy Week’. The faith evening took place at the Catholic Church of Christ the Eternal High Priest, Gidea Park.

Fr David has a Degree in Liturgical Studies from Sant’Anselmo, the Pontifical Liturgical Institute in Rome, which is run by Benedictine monks. He began his talk by recalling that the liturgy presents our faith to us: we should always be attentive to what we hear and to what we see. “The ancient Latin saying  lex orandi, lex credendi  implies that from our prayer we delve deeper into our faith. ‘What you see is what you get’, we might say.”

The original holy day is, of course, Sunday, he said, and every Sunday has always been the day to celebrate the Resurrection of the Lord. But the Sunday of Easter gradually emerged as the pre-eminent Sunday, due to its closeness to the Jewish feast of Passover.

It was with the growing popularity of pilgrimages to the Holy Land, once the Roman Empire had become Christian in the fourth century, that the liturgies of the other days of Holy Week developed. Christians would visit the supposed site of the Last Supper to recall the meal of Jesus with his disciples the night before he died. They would visit the place of Jesus’ death and resurrection on the following day. The Spanish nun Egeria has left us reports of her visit to Jerusalem in 381-384, and tells us what she saw being celebrated by Christians on those days.

Fr David stressed: “Each day of Holy Week encompasses both the suffering and the glory of Christ.” In particular, he said, Palm Sunday, variously known as Palm Sunday, Passion Sunday, or Palm Sunday of the Passion of the Lord, was originally a day for emphasising the kingship of Christ. The Solemnity of Christ the King only came into existence in 1925. 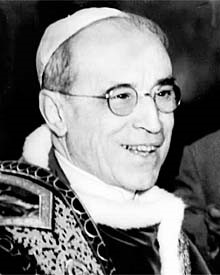 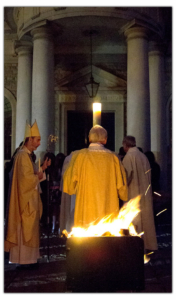 He paid particular tribute to the work of Pope Pius XII (left) in his reform of the Holy Week liturgies. “The Easter Vigil service had been held on Saturday morning and was now moved to the night. The paschal candle became the focus as the congregation gathered around the new fire at the beginning of the Vigil. The ancient hymn, known as the Exsultet, was given greater prominence, while the customary twelve readings from the Old Testament were restored. Members of the congregation were invited to renew their baptismal promises during the Vigil.” 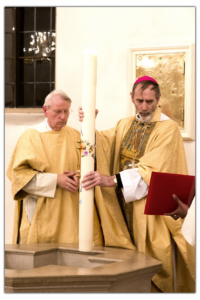 The reforms of the liturgies of Holy Week were happily completed in the aftermath of the Second Vatican Council, resulting in the renewed liturgies celebrated since then.

Fr David showed a slide of a crux gemmata, a ‘jewelled cross’ which would have contained a relic of the true cross, and was used for veneration on Good Friday. “Once again it is seen that suffering and glory are the two sides of the one coin,” he said.

Fr David’s audience learnt a great deal from the evening, and many would have stayed much later to continue the question session, said Fr Adrian Graffy, parish priest of Gidea Park. “It was a fascinating evening, and I am sure that people will derive great profit from the talk, especially as they participate in the services of Holy Week.”

Fr David said: “I enjoy sharing the history, the traditions and the meaning of what we do in worship, so that others can share that and have a deeper appreciation of the liturgy.”

The talk was recorded, and will be available on www.whatgoodnews.org once the website has been revamped.