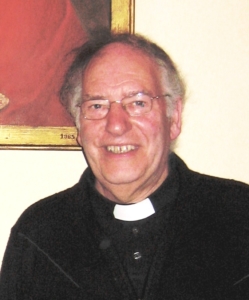 When Fr Denis Hall died suddenly and unexpectedly at the age of 74 on 26 March 2015 (not long after his Golden Jubilee of Ordination), a shock-wave went through the Diocese of Brentwood at the loss of a man described as ‘a legend’ in East London, where he had served for all but two of his 50 years as a priest (Canning Town, Leyton, Manor Park, Forest Gate and Upton Park) and where his ‘second religion’ (West Ham United Football Club) was known to generations, both Catholic and non-Catholic.

His Requiem Mass at St Antony of Padua, Forest Gate, celebrated by two bishops and 100 priests, was witnessed by a congregation of more than 2,500 people (many of whom had to stand outside what is a very large church). It was during the homily preached at the funeral by Monsignor John Armitage (who first served Mass for Fr Denis as a boy in Canning Town) that Fr Stewart Foster, Archivist of the Diocese of Brentwood and a close friend of the deceased, was inspired to put together a memorial booklet which was published earlier this year to coincide with Fr Denis’ first anniversary of death.

A Priest Like Denis contains memoirs of this remarkable priest from bishops, clergy, religious and parishioners from around the globe, with the contributors ranging in age from 15 to over 90. Donations totalling more than £8,400 were received for the booklet, all of which was given to Aid to the Church in Need (Fr Denis’ favourite charity and one to which he was personally very generous in his will), thanks to the generosity in meeting the printing costs by T. Cribb & Sons, the East London Funeral Directors. Farver ‘all (as he was known in the East End) was effectively ‘chaplain’ to Cribbs for nearly 50 years. Fr Foster commissioned and edited the contributions and Shea Lolin, a professional musician and a former altar server for Fr Hall from St Stephen’s, Manor Park, produced the beautifully illustrated booklet.

On Sunday 5 June a cheque was presented to Neville Kyrke-Smith, UK Director of Aid to the Church in Need, after the 11.30am Mass at Our Lady of Compassion, Upton Park, the church adjacent to West Ham’s recently-vacated Boleyn Ground. The presentation was made by young people led by Chrissanth Karunakaran (15), the youngest contributor to the booklet, which is still available from [email protected] for £7 (incl. p & p).

Kyrke-Smith expressed his sincere thanks to the priests and parishioners of the Diocese for their generosity. “The memorial booklet is a great tribute to Fr Denis and the money raised will go towards the many projects supported by ACN in countries where Christians are persecuted.”