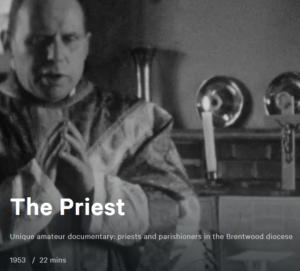 An amateur documentary film made in the 1953 entitled The Priest, featuring Fr [later Canon] Francis Dobson of the Brentwood Diocesan Travelling Mission based at Stock, has been posted online by the British Film Institute. It is a vignette of the Church in the Diocese of Brentwood, particularly the far-flung rural areas – and contains scenes that parishioners in those areas will recognise. The Archives at Brentwood have a copy of the original spool but the BFI posting will allow people across the diocese to view this unique footage.

The BFI notes: “This unusual amateur documentary outlines the work of Catholic priests in the Brentwood and Romford area. It is laden with interesting period details, such as the travelling mission to further-flung villages, enabling isolated Catholics without motorcars to celebrate Mass. The film’s tone, though pious, ranges from gentle humour (priest struggles with motorbike) to deadly earnest (sacraments administered to the sick and dying).

“The film reaches us today as a fascinating, even moving postcard from two historic journeys: Catholicism moving from England’s oppressed margins to its respectable mainstream, and rural Essex turning into sprawling North East London. The narrator was himself a local parish priest but little else is known about the film’s production, which arrived at the BFI among hundreds of reels of film stored at the laboratory, then closing, that had originally processed it over 40 years earlier. Shot on 35mm, it is quite ambitious for a mid-century non-professional production, using editing techniques to create striking symbolic imagery.”