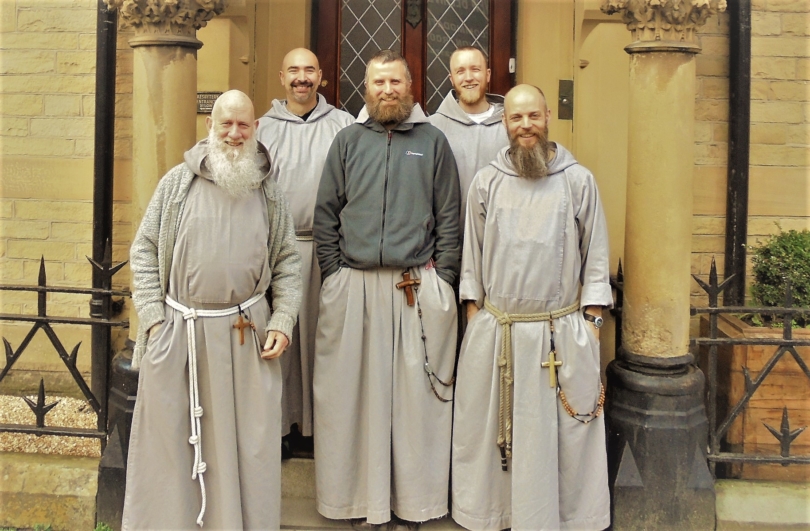 The Franciscan Friars of the Renewal at St Patrick’s Mission in Bradford’s Westgate are the subject of an hour-long BBC documentary to be broadcast this Holy Thursday.  Bronx to Bradford: Friars on a Mission will air on 13th April after the 10 o’clock evening news on BBC One.

The Franciscan Friars of the Renewal were founded in 1987 with a mission of ‘hands-on’ work serving the very poorest in society.   The communities are seeking to live out the vows of authentic Franciscan life in a way that effectively challenges the worldly values prevalent in every age.  The order always operates in harmony with the local bishop and they serve according to the needs of each diocese.  A BBC crew have been following the Friars’ work in the Diocese of Leeds since February, as they deliver Christ’s message in Bradford and to provide a place of refuge for the homeless and the poor.  They operate from St Pio Friary – the refurbished St Patrick’s presbytery and convent from where they run a dining room and clothes-swap visited by around 80 homeless people each day.

Executive Producer for the BBC film is Tony Parker – himself from a Catholic background in the Diocese of Leeds.  Tony said:   “We wanted to tell a story about Easter and what it means in 2017. When we heard about the Brothers in Bradford we knew we had found what we were looking for!  We wanted to capture the work of the friars and their positive outlook on life. Despite all the challenges they face, they have a wonderful and infectious sense of humour. What impressed me was that they have a deep faith, but are also very much connected to the modern world where they help those in need.  They also manage to support the renewal of the disused St Patrick’s Church. One of the joys of the film is seeing the local community come together as they celebrate Mass on St Patrick’s Day. Again, it’s the story of Easter – a message of hope and new life.”

The other aspect of the Friars’ mission is evangelisation “…through preaching and teaching the Holy Gospel, and by sharing the rich treasures of the Catholic faith with all”.  To this end, the Friars’ base in Bradford is working with the newly-launched Friends of St Patrick’s Mission redeveloping St Patrick’s Mission Church to serve the needs of visitors to the city and all those who live or work in the city centre.

The BBC filmed the recent St Patrick’s Day Mass, where the church was filled by more than 300 people.  The programme interviewed several parishioners who remembered St Patrick’s Day celebrations in years past, illustrated with short clips of rare black and white footage provided by the Leeds Diocesan Archives which show the scale of other Feasts and Festivals in the Catholic history of Bradford.

St Patrick’s is the oldest and now the only Catholic church in Bradford’s city centre but has been closed since 2012 – yet the ongoing work to renew St Patrick’s Mission as a centre for evangelisation and place of worship and retreat shows that as Fr Gabriel Kyte and Bishop Marcus Stock agree: “Catholicism is Bradford is here to stay and here to grow!”

Bronx to Bradford: Friars on a Mission has a transmission slot straight after the 10 O’clock News on BBC One – likely to be 10:45 pm – and the programme will also be available on iPlayer for 30 days after transmission.