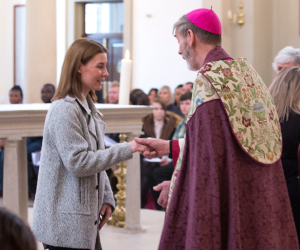 This weekend will see around 200 people becoming members of the Catholic Church at the Easter Saturday Vigil.  Many of them attended the Rite of Election at Brentwood Cathedral at the beginning of Lent and were greeted individually by Bishop Alan Williams. The event was a milestone in their journey, begun last year as RCIA candidates in their own parishes (see below for more on the RCIA).

Before they were introduced to the Bishop, they listened to his message of welcome and hope. “God has chosen us in Christ. He wants human beings to enter into a covenant, an agreement, a way of living that is about love, about salvation, about redemption. That is our faith.”

Fortunately, we also trust our experience, he said. “Throughout the centuries there have been women and men who have heard God, who longed to see God and actually said ‘yes’ to God.

He continued: “God has chosen you but today in a very special, formal way you are choosing God publicly before the Church. That is a very great act of witness a wonderful commitment, a great step forward in your journey towards the house of God the Father.” 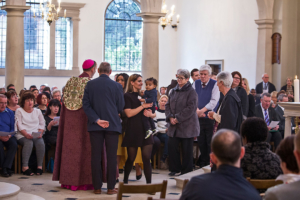 It is no accident, he said, that the Rite of Election is on the first Sunday of Lent. “For 40 days we prepare ourselves for the coming of Christ at Easter, for the celebration of his passion. But Lent actually belongs to you. It is about trying to learn how to live a Christian life.”

In the Ash Wednesday gospel, he said, “Our Lord told us to thirst for the things of heaven, the things of God. Great human life without God, without prayer, we believe, is impossible. So as you come on board today on this journey, I encourage you to find out what a difference prayer makes, what a life lived for God means.”

“In the Gospel we also heard,” he said, “about charity, alms-giving, goodness, kindness, generosity – all those gifts of the Holy Spirit that are the mark of a true Catholic Christian. We look to God and to our neighbour with the mind of Christ.”

One final aspect of the Ash Wednesday Gospel reading, he said, concerned self-discipline. “It was about order within ourselves. So often human beings left to themselves are disorganised. We struggle, grapple and stumble our way forward. With Christ as our light in life we can find our way forward in a wonderful way. ‘I have come that you might have life to the full’, said Jesus Christ. So that’s the way for Catholic Christians – the ways of God, generosity to our neighbour and an interior life of Christ.” 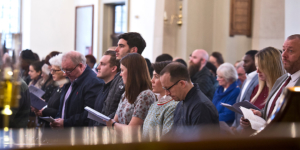 He said Pope Gregory the Great observed that Lent is much too valuable and precious just to be left to the Catechumens and Candidates. “The whole purpose of Lent is for them but it is a wonderful way of living. In the words of the church, this is the season of great grace. If there is something you want to change in your life, some direction you want to go in, Lent is the best time in the Church’s year to make that decision. So although new entrants are at the centre of Lent, the entire Church is with you and tries to live connected with you this year and every year. So welcome to the Catholic Church – I will meet you all today for a short time and, although I have no idea of your own journey, all I would say is to remember that the word ‘Catholic’ means all-embracing. No matter what your struggle has been, no matter where you are now, Christ chooses you today and with great confidence you can choose Christ also.”

On the Journey in Faith 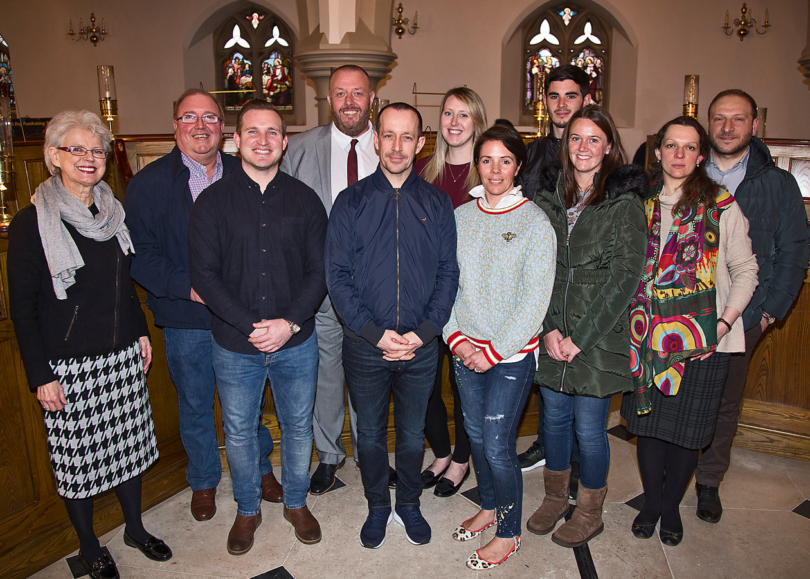 Maidi Brown has been a RCIA (Rite of Christian Initiation for Adults) catechist at the Cathedral parish for about seven years – and her dedication and empathy are obvious when she talks about her work. “I would say initially I got involved because I was asked but probably the reason is the same for all catechists; maybe it’s the sense of being part of the mission of our parish and being able to reach beyond it. It is about introducing people to a new way of life.”

The RCIA label is a bit of a mouthful, so it tends to be called ‘Journey in Faith’, she says, and her role is to accompany those interested in becoming a Catholic on that journey.

Cathedral Dean Fr Martin Boland directs the course which starts in September. “Parishes do it in different ways, but here until Christmas we focus on broad topics such as Happiness and the Meaning of Life and Creation and Redemption. We also look at the Old and the New Testaments. After Christmas we give an overview of the sacraments of the Church and explain the Mass as well as Lent and Holy Week.”

The sessions usually consist of a half-hour presentation, followed by a coffee and a chat and, depending on numbers, small group discussions.

“Occasionally you get someone who is quite assertive but small groups are essential as the candidates initially tend to be tentative and very diffident. Trust develops gradually – it takes time for people to get used to the language of faith. As catechists our main role is to be there for them as they come very gradually to understand the way things are in the Church.”

She continues: “Every year after Christmas we see a difference in participants. Physically they change, becoming more relaxed in their body language. It is an amazing transformation.”

She says the catechists do not know what brought the participants to the course. “Some may have spoken to Fr Martin; some may not. So everything has to be very gentle and we have to be very respectful of their personal life. Often people make these life-changing decisions because something has happened – perhaps a death in the family. Sometimes they cannot proceed because of a previous marriage which has to be resolved through Chancery – and they may come back several years later when that has been done.”

She sees evidence of the benefits of the journey for participants. “Someone last year was being made redundant – and making the decision to join the Church helped her enormously in dealing with that. It helped her to see things differently. That’s what Journey in Faith does. It enables participants to see another side to their daily reality – it opens their eyes.”

She believes the distance travelled for most is considerable. “From an early enquiry and tentative interest to the Rite of Election, where people are close to making a firm commitment, is a huge journey in only six months.” And some of the topics touch people personally. “Tomorrow, for example, we are going to discuss the sacrament of matrimony and this year we have three people on the programme who are about to get married and may find that the discussions raise issues for them. So the programme touches people absolutely where they are in their lives. That’s why it has to be a gentle journey with each person moving at their own pace. There is no assessment. It all happens organically.”

The participants are invited to a retreat at The Grange before Lent starts, she says. “You can tell if they come to the retreat – committing to a Saturday from 10am til 3pm – that the course is worthwhile for them, that it is meaningful.“

For some, though, it can be like getting a passport – a formality – and the transformation does not happen, she says. “When children are baptised, it is a formality that doesn’t really affect them – that all comes later. I often think of it that way when participants are not fully engaged. They may not be touched deeply by that grace at that time – but they may well come back to it in later years. The most important thing is that the course opens a door for people.”