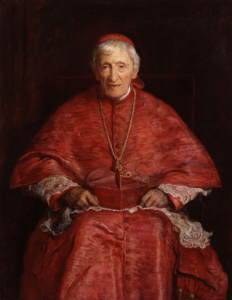 As the 13 October canonisation of Blessed John Henry Newman approaches, pilgrims from Brentwood Diocese are preparing to travel to Rome for the occasion.

WHO WAS CARDINAL NEWMAN?

John Henry Newman was born in Old Broad Street in the City of London on  21 February 1801 and was baptised as a member of the Church of England when he was six weeks old. His father was a banker and his mother was of French descent. He was educated at Ealing School and in 1816, aged fifteen, he underwent his first religious conversion (to a more committed Evangelical form of Anglicanism). In 1817 he entered Trinity College, Oxford, where, three years later, he was awarded the degree of Bachelor of Arts, although he did not do as well in his final examinations as had been expected. However, in 1822 he was elected as a Fellow of Oriel College, Oxford, and two years later he was ordained as a deacon in the Church of England, having decided upon the Anglican ministry. His first appointment was as curate at St Clement, Oxford. He was ordained as a priest of the Church of England on 29 May 1825 and in January 1826 was appointed as a Tutor of Oriel College. In 1828 Newman became Vicar of St Mary’s, the University Church, where he soon gained a reputation as a diligent pastor and a fine preacher.

In 1833 he went on a voyage to the Mediterranean, visiting Sicily and Italy, on which occasion he was struck down with a serious illness and nearly died. As he recovered, he wrote one of the most famous poems/hymns in the English language: ‘Lead, Kindly Light.’ As soon as Newman returned to Oxford in the summer of 1833 he became associated with John Keble, Edward Pusey and others in what became known as the Oxford Movement, an attempt within the Church of England to rediscover and promote its Catholic aspects. The Oxford Movement also gained the title ‘Tractarianism’ because a number of tracts or religious essays were written by its leaders. Newman himself was responsible for Tract 1 in 1833 and, most famously, Tract 90 in 1841, which argued that a more Catholic interpretation could be given to the quintessentially Protestant Thirty-Nine Articles of the Church of England – a view that caused uproar among his opponents. However, by this time, having read a great deal of the early history of the Church and the writings of the Fathers, Newman was beginning to develop serious doubts about the claims of the Church of England to be a part, albeit reformed, of the Catholic Church. In 1843 he resigned as Vicar of St Mary’s and with a small group of companions went to live at Littlemore, a village to the south of Oxford that was part of his former parish and where his mother had paid for the building of a small church. Although he no longer exercised his ministry as an Anglican clergyman, Newman spent his time in prayer and study, seeking to discern God’s will.

On 3 October 1845 Newman resigned his Fellowship of Oriel College and three days later completed writing one of his most celebrated works, The Development of Christian Doctrine, whereby he now recognised that it was in the Catholic Church that the fullness of the true Church established by Christ was to be found. On the evening of 8 October, amidst a heavy storm, the Italian priest, Father (now Blessed) Dominic Barberi, a member of the Passionist Order who had been working in England for some years, walked from Oxford to Littlemore. Having dried his clothes by the fire in the library, he began hearing Newman’s confession. This continued the next morning,  9 October, after which Blessed Dominic received John Henry Newman into full communion with the Catholic Church, together with a number of his companions. Newman subsequently received his First Holy Communion in the small Catholic chapel in Oxford and was later confirmed.

In September 1846, seeking to train for the Catholic priesthood, Newman entered the College of Propaganda Fide in Rome, where he was ordained on 30 May 1847.   He then spent some months preparing to become a member of the Congregation of the Oratory, a community of priests founded in Rome in the sixteenth century by St Philip Neri.

In 1848 Newman established the first Oratory in England at Maryvale, Old Oscott, near Birmingham. It was relocated to a disused gin distillery in Alcester Street, Birmingham, before a permanent foundation was made at Edgbaston in 1851, where the Birmingham Oratory still stands today. Another Oratory was established in London in 1849 (moving to Brompton in 1852), and today there is also an Oratory in Oxford itself (founded from Birmingham in 1990 and formally established in the former Jesuit Church of St Aloysius in 1993).

In 1851 Newman was appointed as the founding Rector of the Catholic University of Ireland in Dublin, a task entrusted to him by the Irish bishops.  The University opened in 1854, although Newman resigned his post three years later.

In 1864 he published what is probably his best-known work, the Apologia Pro Vita Sua, which was a defence of his religious position occasioned by a personal attack by the author Charles Kingsley. Another very important book, An Essay in Aid of a Grammar of Assent, was published in 1870, in which Newman set out his philosophy of religion.   In 1875, in A Letter to the Duke of Norfolk, he explained his response to the question of individual conscience in the light of the declaration of Papal Infallibility. In 1878 Oxford ‘forgave’ Newman, as it were, when Trinity College, his first college, made him an Honorary Fellow. In the following year Pope Leo XIII created Newman a Cardinal in recognition of his service to the Church. Newman received his red hat in Rome on 15 May 1879. His final years were spent in increasing retirement at the Birmingham Oratory, although until the end of his life Newman was a prodigious letter-writer. He died at the Birmingham Oratory on 11 August 1890 and was buried in the Oratory cemetery at Rednal, on the outskirts of the city, eight days later. 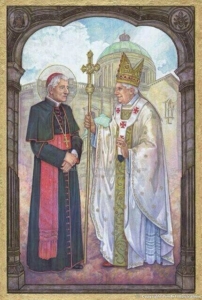 On 22 January 1991 Pope John Paul II declared John Henry Newman to be ‘Venerable’. This recognition by the Church was not simply on account of his scholarship but because of Newman’s holiness of life. As well as being the greatest religious thinker in nineteenth-century England, John Henry Newman was primarily a parish priest and an educator.

For beatification to take place a miracle is required. This occurred when Rev. Jack Sullivan, a permanent deacon from the United States, who was suffering from an incurable spinal condition, learned of Newman and decided to ask his intercession.  He received a healing from God on 15 August (the Solemnity of the Assumption) 2001. After rigorous medical and scientific investigation by the Church, the healing was declared miraculous by Pope Benedict XVI on 3 July 2009. On Sunday 19 September 2010, at the end of his State Visit to Great Britain, Pope Benedict (who has a long-standing personal devotion to Newman) declared him Blessed. Deacon Sullivan assisted at the altar in Cofton Park, Birmingham on that day. Blessed John Henry Newham’s Feast Day was inserted into the Calendar as an Optional Memorial on 9 October (the day of his reception into the Catholic Church).

Thereafter, the recognition of a second miracle would mean that the path to canonisation (or sainthood) would be open. On 29 November 2018, following an investigation by the Archdiocese of Chicago, the Congregation for the Causes of Saints approved a further miracle: the unexplained healing in 2013 of a pregnant woman, Melissa Villalobos, from a life-threatening condition which enabled her to give birth to a daughter (Gemma) on 27 December 2013.

On 13 February 2019 Pope Francis accepted the further miracle and at a Consistory of Cardinals on 1 July 2019 announced that the canonisation of Blessed John Henry Newman would take place in Rome on Sunday 13 October. Melissa Villalobos, together with her husband David and seven children, will be present in St Peter’s Square for the occasion.

The Canonisation of Blessed (Cardinal) John Henry Newman takes place in Rome on Sunday 13 October. To mark this historic occasion Father Stewart Foster will give a lecture entitled ‘St John Henry Newman: His Life and Times’ on Thursday 17 October at 7.30pm in the Conference Centre, Cathedral House, Ingrave Road, Brentwood CM15 8AT. All are welcome.